CHIMEI Corporation has unveiled a new portfolio of sustainable materials under the Ecologue trademark, combining present innovations in recycling with future ambitions in bioplastics and zero-carbon production.

Ecologue’s debut products are on display at the joint CHIMEI and Biesterfeld booth (B18) in hall 5, while talks on Ecologue and Chemical Recycling in the Future of Acrylics are being held at conference room 6 in Congress Centre Düsseldorf (CCD) South.

“Ecologue is more than just a catalogue of sustainable materials,” says Andrew Hsieh, CHIMEI Sustainable Material Solutions Manager. “Ecologue is where conversation fuels change. Through Ecologue, CHIMEI will initiate discussions that drive collaboration among colleagues and partners, across the whole value chain, transforming dialogue into practical steps that improve the sustainability of performance materials.”

Ecologue is launching with a range of post-consumer recycled materials. These include mechanically recycled ABS resin and the world’s first light guide plate made from chemically recycled MMA. This pioneering LGP product was specially developed for display screen applications and is slated for mass production in Q3, 2023.

Bioplastic innovations, which include biodegradable and biomass materials, are ongoing. CHIMEI has identified the potential of Ecologue biodegradable materials to replace single-use plastics in the future. CHIMEI has also identified the potential of bio-based feedstock to replace fossil feedstock in the production of Ecologue biomass materials.

Ecologue™ Talks: Chemical Recycling in the Future of Acrylics

Join our talks at K 2022!
This year, CHIMEI made a major breakthrough in developing chemically recycled acrylics for optical-grade applications.
Our experts will share this solution, how it can serve the market, and how we're transforming acrylics for a sustainable future.

Neste, the world’s leading producer of renewable and circular feedstock for the polymers and chemicals industry uses, will provide Neste RE to Idemitsu Kosan, the biggest SM manufacturer in Japan. For this collaboration, Neste RE is produced from 100% bio-based raw materials such as waste and residues and its use can significantly reduce greenhouse gas (GHG) emissions compared with conventional fossil feedstock use.

Idemitsu Kosan will then produce bio-SM based on the mass balance method and supply it to CHIMEI, the biggest ABS manufacturer in the world for its renewable plastics production. Mitsubishi Corporation will be coordinating the collaboration between the value chain partners and develop renewable product’s market.

Through developing an even stronger partnership and closer collaboration than conventionally seen in plastics value chains, the companies are introducing new renewable contents into the value chain to enable plastic production where fossil feedstock has been replaced with biomass. With this, the companies are contributing to the plastics industry GHG emission reduction targets and the transition towards a low-carbon emission society.

*) ABS resin is a thermoplastic polymer made from acrylonitrile, butadiene and styrene monomer, and given its properties of impact resistance, toughness, and rigidity, it is used across different sectors which include automobile, electronics and toys.

CHIMEI Has Completed an Ecological Survey of its Green Energy Park

In May of this year, CHIMEI completed a one-year-long ecological survey of its Green Energy Park, covering the diversity of animals, plants, and soil properties. Results of the survey indicate that 282 species of animals and plants have been recorded in the park, showing that the ecology of animals and plants in our Green Energy Park is quite rich compared with that in general low-altitude farmland and rural areas. Its soil, common loam of the alluvial plain surrounding the Zengwen River, is of good quality, and there is no heavy metal pollution.

The CHIMEI Green Energy Park was officially opened in August 2020. Under its core concept of "symbiosis of trees and electricity", a solar power plant was set up on the premise of preserving existing trees and vegetation to the greatest extent possible. In addition to having installed solar panels with total potential energy generation of 20 million kWh per year, the park also has a rich and valuable natural ecology. Nevertheless, it lacked systematic ecological survey data. CHIMEI saw that it was necessary to conduct a detailed ecological survey of the park to maintain its existing natural ecology. Through professional academic surveys, CHIMEI has gained a deeper understanding of the ecological characteristics of its Green Energy Park, which will serve as the basis for monitoring the future ecological impact of the region over the long term.

Therefore, in April 2021, CHIMEI commissioned the team of Prof. I-Ling Lai from the Graduate Institute of Bioresources of the National Pingtung University of Science and Technology to conduct a quarterly ecological survey for a period of one year (a total of four surveys). The survey targeted three categories: plants, animals, and soil. The park was divided into 14 survey areas, according to characteristics of landscape and vegetation, and the ecology of each area was recorded.

The survey also showed that the grass in the solar panel area was flourishing. This was a result of CHIMEI adopting a green construction method. Zero concrete was used in the panel foundations and zero cement and asphalt were used in the entire park area, meaning that plants are free to grow under the photovoltaic panels. In addition, the park is regularly weeded and maintained. Although this means increased maintenance costs, it is beneficial to the growth, proliferation, and diversity of plants. When solar panels are cleaned, only water is used, so the risk of adverse effects on the soil is reduced.

The animal survey indicates that fireflies and dragonflies, which are both indicator organisms, have been recorded in the park, meaning that the park’s habitat is in a good state. Presence of birds of prey, such as collared scops owls and black-winged kites, also indicates that the park has a complete food chain and superb biodiversity.

At present, the survey has established complete data on the animal and plant species as well as the soil properties of the Green Energy Park. In the future, CHIMEI will use this survey as the basis to conduct long-term monitoring and plan conservation actions, thereby continuing to protect its biodiversity. 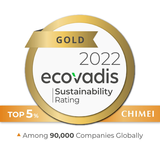 CHIMEI Corporation has been awarded Gold Medal rating for sustainability by EcoVadis, putting it top 5% among 90,000 companies assessed by EcoVadis. Compared to 2021, CHIMEI saw a significant improvement in this year’s ratings in the “Ethics” and “Sustainable Procurement” themes, and it continued to maintain strong performance in the “Environment” and “Labor & Human Rights” themes.

EcoVadis is a well-known global business sustainability ratings platform that aims to promote the sustainable development of global supply chains. It reviews about 90,000 companies from more than 160 countries across 200 industries each year. EcoVadis assesses companies on 4 themes: “Environment”, “Labor & Human Rights”, “Ethics”, and “Sustainable Procurement”. Last year, CHIMEI was awarded the Silver Medal by EcoVadis. In this year’s assessment, CHIMEI has improved its score, receiving the Gold Medal demonstrated CHIMEI’s continued improvement of its overall performance in sustainable development, including its implementation of ESG related management systems such as ISO 37001 Anti-bribery management systems and ISO 20400 Sustainable procurement – Guidance. The medal also reflects CHIMEI’s actions and achievements on sustainability have earned international recognition.


CHIMEI will continue with full commitment to global sustainability, including working with our clients to develop green materials, make the circular economy a reality and step up its “Clean & Green” efforts to achieve net-zero emissions by 2050. The company will also continue to improve sustainable management in all aspects and build trustworthy partnerships with customers and supply chain to “create lasting well-being” together.

The COVID-19 pandemic has continued to spread for two years, and the way of doing business has also been changed. Not only face-to-face business visits are restricted, but many trade exhibitions have also been forced to cancel, postpone, or transform into online exhibitions. In order to share the latest development of the company with global business partners in real time, CHIMEI specially launched the "A Day in CHIMEI" online exhibition with an interactive and immersive experience, so as to overcome the inconvenience of the pandemic and shorten the distance in time and space with global partners . Through the 360-degree virtual factory scene and the carefully planned text and video content, visitors can easily feel as if they are in CHIMEI.