The products of our HD series are high-density cartridge elements and belong to the new generation of compacted MgO heaters.
The compaction of MgO ceramics is an innovative technological feature, thanks to which you can obtain uniquely high performances.

In our HD heaters, the resistive wire is winded around an MgO core and is thus located in proximity of the external heater’s tube. This technology prevents the wire from overheating and grants an efficient heat-transfer, many times superior to that of traditional heaters.

The HD series allows for a density of up to 50W/cm2 (or 320W/in2).
For temperature control, HD heaters may be produced with an in-built thermocouple or RTD, and with a differentiated power distribution for a uniform working temperature. We also produce cartridge heaters containing two or more independent sectors within the same element, which allow to control the working temperature in each area. Additionally, non-heating zones are also applicable.

Our HMC series Coil heaters represent the maximum expression of technological innovation in the field of compressed MgO-insulated heating elements.

They are characterised by rather small dimensions and high performances. HMC heaters are suitable for every application where space is particularly contained and where high temperatures are indispensable for the proper functioning of the production process.

Initially developed for hot runner systems and plastic injection moulding, they are now used in many different industrial applications due to their versatility. 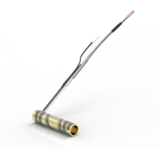 Our HMX products are the optimal solution for the heating of nozzles. A HMC heater is coiled around a thin-walled, high-precision cylinder and pressed into a designated groove on the cylinder’s surface.
The HMX system is suitable for the heating of cylindrical metallic masses.
The grooved cylinders are typically made in brass.
The grooves are designed in agreement with the customer.
Customised power distribution
The products of our HMX line may also be supplied with a in-built thermocouple, type J or K.

The HTF series comprises square-section tubular heaters. Due to their performances and features, they are taking the place of round-section armoured heaters.

They are high-performance heaters in which the square-section of the external tube guarantees a superior heat-transfer.
Also owing to their shape, HTF heaters stand perfectly firm inside their housing groove. Thus, no additional fastening systems will be needed

While specifically suitable for use on manifolds in hot-runner systems, they are also employed in the heating of metallic plates and masses where heat-uniformity is a critical factor.

Thanks to their malleability, HTF heaters may be used straight or bent into various shapes, depending on your application.
A large selection of standard HTF heaters are ready on stock, with different lengths and wattages.

Our story began in 1969, in a small room of Bologna’s city centre; there, we started producing our first cartridge heaters.
We grew in the middle of the Packaging Valley over the 70s and became the official partners of many manufacturers of packaging machinery.

At a later time, owing to the accrued experience, we earned the position of leading suppliers of heating elements for industrial applications.

Early in the 90s, we made our official debut in plastic injection moulding with the new high-density cartridge heaters
In the year 2001, with the relocation to the facility of San Lazzaro di Savena, near Bologna, a new phase began. A profound structural and organisational change occurred, in order to face the challenges of an ever-evolving Market.

After an intense stage of research and development, in 2008 we launched the production of coil heaters for hot runner systems.
In 2014 on 21st July, we inaugurated a new factory in Cadriano, a hamlet of Granarolo dell’Emilia just outside Bologna. We provided the facility with the most advanced technologies for the production of cartridge and coil heaters.

We conquered new markets in countries where the concept of high quality is deeply rooted, thanks to the diversification of our products and the development of high-tech heaters.
As of today, we achieved important goals by virtue of the people who have been part of the company’s history.