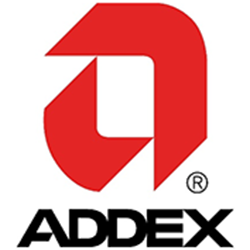 Mounted between the die and the air ring, Intensive Cooling achieves tremendously higher output rates. High-quality film is assured by the enhanced stability of the bubble.

Equipped with horizontally sliding teeth that adjust the air flow through the radially located channels in the air ring's plenum, in response to mapped thickness profiles. Preferential cooling on the outside of the bubble delivers a uniform thickness profile. The Addex EGC air ring controls 100% of the air flow to the air ring, therefore providing the greatest impact on the process and maximum control capability for gauge variation.

Patented IBC control system is 100% digital, making it very reliable in the toughest plant environments because the interferences with other electrical devices are eliminated.  Tightest possible layflat control achieved when equipped with the high-speed valve.  Patented dual sensor set up--the DIBC stabilizes bubbles that cannot be stabilized with other IBC systems.  The DIBC can be integrated into any other Addex or non-Addex control system.

NEWARK, NY, September 10, 2019 – Addex Inc., a leading supplier of high-performance blown film cooling equipment, is celebrating 30 years in the plastics industry.  A technology-driven equipment manufacturer, Addex has been at the forefront of the latest advancements in blown film equipment since its founding in August 1989. The company, co-founded by President Bob Cree and former president and current Chairman of the Board Rick von Kraus, has steadily grown from humble beginnings to its current position as a global manufacturer of blown film equipment.

Through direct-to-customer sales and strategic partnerships with leading processors throughout the world, Addex continues to successfully meet the needs of processors in its core market—the blown film packaging industry.  Success has been built by our great team, which continues to innovate and lead our company to new heights in terms of quality, performance, and professionalism,” said Cree. “We’ve recently focused vertically with blown film cooling as our core business mission, and we work very hard to stay ahead of the curve in terms of technology and engineering.” Cree has played a leading role in the company’s growth and evolution by directing the company’s research and development activities and product development efforts since its inception.

Addex entered the blown film industry in 1989 with the introduction of the first hybrid analog/digital microprocessor-based Internal Bubble Cooling (IBC) control system, which was fueled by Cree’s personal interest in building computers. The IBC went 100% digital in the early 2000s—a patented industry first—along with the addition of a “quick-changeover" feature, high-speed servo valve, and split sensors to deliver the fastest reaction time in the industry, ensuring the tightest possible layflat control.

Another key milestone came in 1995 when Addex made a significant advancement in gauge control, introducing the patented Internal Gauge Control (IGC), an internal-to-bubble, IBC-based gauge control system. With resolution in excess of 360 zones and advanced measurement capability, the control capability within 1 deg. of resolution is still the best resolution in the industry. In 2004, in response to processors’ need for a simple-to-operate, cost-effective gauge control system, the company introduced the fully manual Manual Gauge Control (MGC) with individually-adjustable control bolts, as well as Addex’s patented

External Gauge Control (EGC), which cuts controllable thickness variation by over 50%. In 2013, the tandem external gauge control was introduced, adding a bubble stabilizing lower ring to sit “flat to the die” and increase output rate.

In 2001, Addex’s foray into die design produced the patented REDI die—a side-fed, stackable die.  Cree used the concept of regular division of the plane to interlace flows of polymer through the die, aptly named the REDI die.  The REDI die is Cree’s die of choice on the Addex R&D line since it is modular and streamlined, allowing it to process difficult-to-run materials.

Most recently, Addex has taken an industry lead with the introduction of its patented air ring design called Intensive Cooling, which has eclipsed all previous industry developments in terms of increased output and bubble stability, becoming the first major advancement since the company narrowed its product mix to focus exclusively on blown film cooling.

Introduced at K 2016, Intensive Cooling began as a stackable configuration of two to four cooling elements, which were fully enclosed and mounted between the die and the air ring. Using air from each cooling element flowing in opposite directions to create a vacuum, bubble stability was greatly improved, which in turn led to massive output gains. The output gains were too great for the retrofit market, however, so the company replaced the lower lips in an Addex air ring with just a single, aerodynamically-designed Intensive Cooling element. This change placed output into the sweet spot for retrofits, delivering a guaranteed 10-15% (or more) output increase that older lines could handle. Addex licensed the original stackable design to other OEMs for use on new lines, while penetrating the retrofit market with these easy-to-operate, down-on-the-die Intensive Cooling air rings. The company has sold over 100 Intensive Cooling air rings into diverse applications from bag making, to lamination films, to barrier—and is especially popular when combined with the company’s EGC automatic profile control capability.

Addex continues to innovate and is now entering Phase 2 of Intensive Cooling development. The company is examining the design of other components in the blown film process, such as the main air lip design, air collars and IBC—all to optimize total system performance in combination with Intensive Cooling. Addex will showcase its Intensive Cooling technology at the upcoming K 2019 exhibition (Hall 17/C41) Oct. 16-23 in Düsseldorf, Germany.

Today, Addex supplies some of the most sophisticated blown film cooling technologies capable of producing films at the highest possible output and stability, with the lowest possible gauge variation. Addex’s dedicated focus on blown film R&D has resulted in approximately 30 U.S. patents (or patents pending), including many cooling-related patents such as Intensive Cooling air rings, Automatic and Manual Profile Controls that yield high-quality films, and an All-Digital IBC Control with Quick Change Feature that significantly reduces scrap.

ADDEX TO ANNOUNCE PHASE 2 OF INTENSIVE COOLING AT K 2019 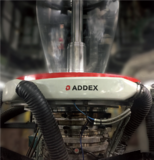 “Intensive Cooling” is Addex’s revolutionary approach to cooling the bubble. Addex’s patented design change from the common aerodynamics of present-day blown film air rings is responsible for dramatic increases in stability and output. Addex continues to refine the system for even greater gains when combined with the company’s proprietary auto-profile and IBC systems.

Addex, which is celebrating its 30th anniversary this year, enjoys strong commercial success with Intensive Cooling, due largely to repeat orders. The system optimizes performance for both high- and low-melt strength processes, according to Bob Cree, Addex President. “Our customers are buying the first unit and they are not stopping there,” said Cree. “They see what it can do and they continue purchasing.” The most popular configuration replaces the conventional dual flow’s low-velocity, diffused-flow lower lip with a very high-velocity, upwardly-directed, and focused air stream, which is mounted flat to the die to create an entirely new lock point, about 25mm above the die lip. The technology is sold as part of Addex’s industry standard Laminar Flow air ring, and also in concert with Addex’s auto-profile and IBC systems.

Addex has undertaken broad research and development work which has resulted in the filing of several key patents that together shift the aerodynamic paradigm of blown film cooling technology to “get the most out of the process,” according to Cree. “Intensive Cooling products will continue to evolve, fueled by customer feedback and the learning curve, as more systems are put into operation on a variety of processes and materials in production,” said Cree.

Phase 1 Intensive Cooling R&D focused on adapting the technology to run a range of materials—both high- and low-melt materials. Step by step, Addex has garnered success with what the industry considers “hard to run” materials. Now in Phase 2, Addex is taking a fresh look at the design of other components within the blown film cooling process, with an eye toward optimizing total system performance in combination with Intensive Cooling. “Intensive Cooling allows us to push output so far that we start to see where other parts of the cooling system begin to break down, such as the main air ring lip designs, air collars, and IBC—so that’s where our R&D is focused now,” says Cree.

Addex purchased a new extruder after quickly maxing out its pilot line capability with Intensive Cooling. The company also increased die size from 6 to 8-in, raising output from 500 lb/hr to 1200 lb/hr. “The only drawback to retrofitting a line with Intensive Cooling is that the customer may need to make further investments in blowers and extruders to handle the increases in output rate,” said Cree. Addex guarantees a minimum of 10%-15% average increase in output rate, depending on materials being run. Customers have reported actual outputs considerably higher. It is not uncommon to see a 30% increase in output, especially for stiffer materials. In one case, a customer reported an output increase of 80%.

Intensive Cooling operates over a wide range of configurations and materials, supporting fast changeovers and enhanced bubble stability, even at higher output rates, yielding an even broader range of processing parameters such as BUR (blow up ratio), thickness, and melt strength. When combined with Addex’s patented auto-profile External Gauge Control (EGC), processors also experience significant improvements in thickness variation. Many customers are using the combination of higher output and quality associated with Intensive Cooling Auto-Profile to easily justify retrofitting both, according to Cree. The system is also fully compatible with Addex’s Digital Internal Bubble Cooling Control when installed with special IBC hardware.


Machinery and equipment for the plastics and rubber industries