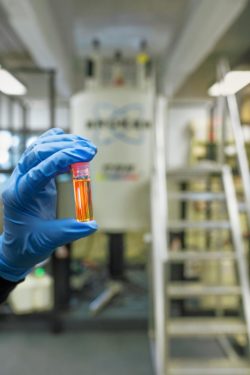 New research provides insight into the structure of silicon nanocrystals, a substance that promises to provide efficient lithium ion batteries that power your phone to medical imaging on the nanoscale.

The research was conducted by a team of University of Alberta chemists, lead by two PhD students in the Department of Chemistry, Alyx Thiessen and Michelle Ha.

"Silicon nanocrystals are important components for a lot of modern technology, including lithium ion batteries," said, Thiessen, who is studying with Professor Jonathan Veinot. "The more we know about their structure, the more we'll understand about how they work and how they can be used for various applications."

In two recently published papers, the research team characterized the structure of silicon nanocrystals more quickly and accurately than ever before, using a cutting-edge technique known as dynamic nuclear polarization (DNP).

"Using the DNP technology, we were able to show that larger silicon nanocrystals have a layered structure that is disordered on the surface, with a crystalline core that is separated by a middle layer," explained Ha, who is studying under the supervision of Assistant Professor Vladimir Michaelis. "This is the first time this has been documented in silicon nanocrystals."

Silicon nanocrystals have proliferated through the world of scientific research. From applications in developing ultra-high capacity batteries to the next generation of medical imaging at the cellular level, their potential is seemingly endless.

"And this will allow us to tailor the silicon nanocrystals to whatever application or field we want to," added Ha. "This research can impact many different areas of research, including the development of more accurate medical imaging technology to new, more efficient batteries. These silicon nanocrystals are extremely versatile."

Both Thiessen and Ha are students in the Alberta/Technical University of Munich International Graduate School for Hybrid Functional Materials (ATUMS) program, which allows them to experience an international cross-disciplinary research environment ans conduct aspects of their research in Munich, Germany.