UV4120PE is a newly developed masterbatch from Tosaf which can multiply the service life of UV-absorbing greenhouse films. According to Tosaf in comprehensive accelerated weathering tests, the UV-filtering efficiency of conventional films stabilized with an organic UV absorber and a nickel quencher (Ni-Q) was reduced to about 30% after a period of 9000 h, because the organic molecules undergo extensive dissociation and decomposition. Adding just 0.7% of Tosaf's UV4120PE increased this value to about 80%, while 2% masterbatch boosted the residual UV-barrier to 90% at the end of the test period. Very similar results were obtained with films containing an organic UV absorber and an N-alkoxy hindered amine light stabilizer (NOR-HALS). Consequently, depending on region, the total service life of greenhouse films can rise from just one to over three years.

Greenhouse operators who use a UV-absorbing film produced with Tosaf's new UV4120PE masterbatch are to benefit from various advantages, all of which contribute to improving product quality. Beyond extending the general weather protecting properties of such films in the long term, the desired anti-virus effect, which is associated with a high UV-absorbing efficiency, remains largely constant over the entire service life of the film. As Tosaf points out this effect is due to the fact that many insects which are potential viral vectors, such as thrips and whiteflies, need UV light to navigate and thus will not enter deeply into areas covered by UV-absorbing films. (One side effect is that the absence of UV light also prevents bees from entering such areas, which means that such films are not applicable for growing plants which need bees for pollination.) One specific advantage which red rose growers can benefit from is that UV-absorbing films have been found to be very effective in preventing the delicate petals of these flowers from blackening.

Tosaf Group, founded in 1985, is a joint-venture between Megides Holding and the Ravago Group. The group operates nine factories in Israel, Turkey, Germany, UK, The Netherlands and the Ukraine, with a total of 800 employees. Tosaf's versatile range of products includes mineral-filled compounds for the white goods industry, automotive and other plastic industries; additives such as UV-/light stabilizers, flame retardants and customized additives for applications including BOPP, agricultural, packaging and industrial films, polycarbonate sheets, pipes, foams and other products; and color masterbatches for a wide range of applications. 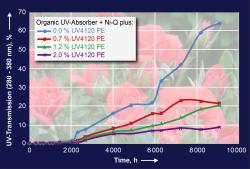