Focus on customers and plastics 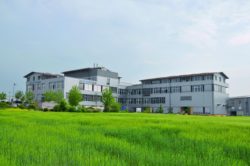 SKZ Technology Centre based on Friedrich-Bergius-Ring 22 in 97076 Würzburg/Germany. (Source: SKZ)

Plastics play a key role in many areas of industry, in craft businesses and in research operations. Polymer materials have changed the world and have overcome more and more of the limits of what is humanly possible. Technological progress of the kind we are familiar with would be inconceivable without the help of polymer research and the stakeholders in the plastics industry – despite all the justified criticism of the side effects that are encountered when plastics are wilfully abandoned in the environment. Strategic advances and major innovations in material development & deployment as well as in technological impact do not happen by accident. They are attributable to an extensive and in-depth understanding of material properties and modes of action. No-one has this know-how intuitively. It has to be acquired, checked, supplemented and shared. The internationally respected SKZ in Würzburg/Germany – one of the biggest plastics institutes in the world – is a facilitator of the technology transfer that is so vital.

The SKZ originated in the early 1960s. Polymer materials had entered practically all areas of everyday life – the first plastics trade fair had been held in Düsseldorf nine years before and had proved to be a great success. This was due not least of all to the ability to vary the property profile of the material simply and comparatively inexpensively and to customise it for specific applications. Plastics often turned out to be the better solution – for clothing, furniture and other things needed in day-to-day life. The consequence of this was that conventional materials were either replaced in many applications or use of them was at least challenged.

The pros and cons of tremendous flexibility 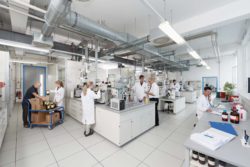 The SKZ chemistry lab. Regardless whether by means of product testing with quality certificate or analyses and expert opinions after damage events - our Testing division supports your product policy and supplies you with valuable arguments for your key markets.. (Source: SKZ)

Users appreciate the fact that the property profile of plastics can be modified and adapted to satisfy their requirements flexibly by incorporating additives and by changing process conditions. This was true in the early days and it is still true today. The range of plastics products subsequently proliferated to some extent, with the result that there was a lack of consistency in the composition, structure and processing of the materials. There was also a lack of expertise and appropriate general conditions to guarantee the production of materials of uniformly good quality. More and more insistent demands were made for verifiable standards as well as for effective training programmes for engineers and plastics specialists.

In 1961, representatives of the plastics industry and craft businesses met in Munich and established what was called the “association for the promotion of the Southern German Plastics Centre“ (FSKZ) – in liaison with and following the approval of the state authorities, which were keen to make sure that plausible standards and regulations were introduced and observed. One of the initial objectives was “to train engineering students for the plastics industry and skilled staff from industrial, craft and trade businesses” [1].

In 1962, the FSKZ moved into what used to be the state farrier school in Frankfurter Strasse, Würzburg. Due to the decline in the number of horses from 1950 onwards, the farrier profession was no longer a viable career; the number of applications to the farrier school plummeted and the school was closed. The Bavarian Trade Institute (LGA), which was established in 1869, bought the empty building and rented it out to the FSKZ. Training workshops were created with the help of industrial partners, who lent machines and equipment. The SKZ started its training operations. Around 1964, the SKZ (a decision was gradually taken to stop using “association for the promotion of” in the name, so that the letter ‘F’ in the abbreviation was finally dropped) started to test the quality of plastics products, for which standards and guidelines were compiled. The SKZ took the opportunity not only to develop a reputation in the industry as a capable training institution but also to establish itself as a recognised inspection authority.

Important partner for the plastics industry 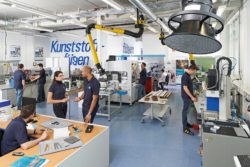 Look into the SKZ joining technicum. Companies in this line of industry are always well advised to press ahead with qualifying their specialists. Bottlenecks caused by new techniques and increase in production volume are to be compensated by further training. Image:SKZ

The strategy was successful. The plastics industry took greater and greater advantage of the range of services provided by the SKZ, in order to satisfy the increasingly exacting requirements of its own customers. In 1972, the Plastics Centre opened its first branch in Stuttgart, the capital of Baden-Württemberg, which was a thriving economic powerhouse where numerous technology companies were based. The partners who co-operated with the SKZ included the booming automotive industry, the most well-known representatives of which were based in Germany in general and around Stuttgart in particular. The SKZ had a total of 50 employees at the time. That was not the end of the road, however. The aim was to grow and the Plastics Centre prospered. All in all, the SKZ now has about 430 highly qualified and committed staff from a variety of different disciplines.

Following the peaceful revolution, the fall of the Iron Curtain and the reunification of Germany when the German Democratic Republic (GDR) joined the Federal Republic of Germany (FRG), the SKZ opened branches in Halle an der Saale (Saxony-Anhalt) and in the town of Peine (Lower Saxony), the economy of which was dominated for a long time by the steel industry. The steel crisis at the end of the 1970s put an end to this. The former economic monostructure no long exists now; it has been replaced by a more diverse selection of different sectors. Companies from the plastics, metalworking, data processing and communications electronics industries as well as food and confectionery manufacturers have settled in Peine in the meantime. A factor that is not unimportant is that Halle is at a strategically effective location in East Germany.

Growth and expansion at all levels 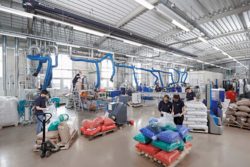 The compounding of the SKZ. Specialist conferences and courses on plastics as well as interdisciplinary topics make it possible to benefit from the recipe for success of strong companies and their experts in order to effectively integrate these practices into everyday business life. Image: SKZ

The SKZ began the 21st century by making numerous changes and reforms. It started to concentrate not only on training and inspection operations but also on applied research and development. In 2004, a new pilot plant focussing on plastics processing was added at the location in Würzburg, where the SKZ was originally established. Three years later, the Plastics Technology Centre came into operation, which provided more than 10,000 square metres of space and extensive resources for testing, monitoring and certifying plastics products as well as for carrying out research and development projects. In 2009, the SKZ Centre of Excellence for Direct Injection Moulding started operation in Würzburg. Training centres were at the same time established in Tehran (Iran) and Dubai. The SKZ set up a subsidiary in Chengde, 160 kilometres north-east of the Chinese capital of Peking, in 2010.

The SKZ continued its expansion programme in Germany too. In 2012, Horb am Neckar replaced the location in Stuttgart/Weilimdorf, because the site there had run out of space. In Horb, the SKZ focusses on the processing of thermoplastic semi-finished products and fibre-reinforced plastic technology, with the recent addition of injection moulding. The European Centre for Dispersion Technologies (EZD), which is devoted to all the main development work required in the production and characterisation of dispersions (blends) and provides relevant services to the industry, was opened in Selb/Bavaria in 2014. And, last but not least, Analytik Service Obernburg GmbH (ASO) in Obernburg/Germany, which is equipped to carry out operations that satisfy the requirements and needs of automotive suppliers and synthetic fibre manufacturers as well as the chemical, plastics and medical industries, has been part of the SKZ since April 2017. 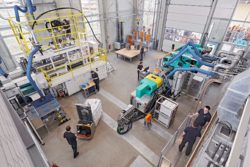 In terms of R & D: From materials through production processes and component properties to the evaluation of processes and products under economic and ecological aspects. The research results of serving operational practice in favor of quality and efficiency. Image: SKZ

The SKZ is supported by an association consisting of more than 400 companies from the plastics manufacturing and processing industry and the machine manufacturing industry as well as numerous public authorities. The areas of operation consist of applied basic research, practical development projects, material and component testing, product approval, quality assurance, certification of production and processing methods, certification of management systems and – a main focus – the training of skilled and management staff from the plastics industry. The services range from vocational training for skilled staff to practical training for commercial staff and engineers and in-house company training course as well as quality and process optimisation.

About 10,000 participants now attend the courses and conferences provided by the SKZ every year. The SKZ is involved in some 70 publicly funded research projects and 1,000 industry-based projects per year. The Plastics Centre gives high priority to support for medium-sized companies at the international level. The entire value chain, from the material to the process and the product – including recyclability – is covered in this context. One unique feature that is important is the sustainability group, which concentrates intensively on finding solutions for the avoidance of waste, for the optimisation of energy consumption and for the improvement of recycling.

The SKZ holds a sound position as an internationally certified institute and an accredited testing laboratory and inspection authority and considers itself to be one of the most experienced and efficient sources of know-how about the testing and quality assurance of plastics moulding compounds, semi-finished products and finished components. It reports that it makes significant contributions to both national and international standardisation with the help of state-of-the-art inspection technology. ASO in Obernburg specialises in testing operations for the automotive industry as well as in-process analysis and release procedures.