Only safe toys under the Christmas tree

Christmas is the time of the year that both retailers and children enjoy most: while the former anticipate higher sales, the latter look forward to receiving lavish presents. The two expectations are closely linked. Not all toys prove to be worth buying, however, because they are unsafe and unsuitable for children. The rule when out shopping is therefore to be wary, no matter what natural or synthetic material the toy in question is made from. In line with the saying “better safe than sorry”, it is always important to choose carefully. This “Topic of the Month” article takes a look at what you should definitely watch out for when buying toys.

Hooray – Christmas is just around the corner. The season of exciting surprises for young and old begins on 1. December. After the first door has been opened, those who count down the days until Christmas Eve with the help of an Advent calendar receive a more or less impressive little gift on a daily basis. What are hidden behind the numbers 1 to 24 are entertaining playthings or sweets – and sometimes both – particularly chocolate, which (as a recent study has shown) is not just a delicious treat; it can also represent a considerable health risk. Contamination by harmful compounds that come from the packaging (recycled paper!) are the reason for this. And then there are the presents under the tree that are opened on Christmas Eve or Christmas Day ... 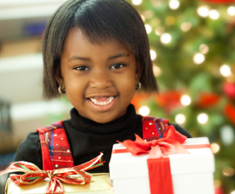 There is no dispute about the fact that children need toys – irrespective of their religion, race or background. For good reasons: because appropriate toys promote the development of motor and intellectual skills and thus help children to develop properly. To protect children’s well-being and physical integrity, it goes without saying, however, that toys must be safe; toys are not allowed to be dangerous or harmful to children’s health. The authorities at the European level already created a legal framework to guarantee this years ago.

The new EU Directive 2009/48/EC, that aims to guarantee a high level of protection for toys, was introduced the summer of 2012. The safety requirements for toys and the minimum requirements for market monitoring apply throughout Europe. The first part of the new EU Directive, which has been in effect since 20. July 2011, covers the technical and design safety aspects, i.e. the ones that focus on the mechanical, electrical and fire safety characteristics of toys. The new rules in the chemical section of the EU Directive on the safety of toys, i.e. the part that makes such problems as pollution with heavy metals or plasticisers or harmful chemicals the centre of attention, do not come into force until 20. July 2013, however.

For a long time, the EC Directive 88/378/EEC on the safety of toys outlined the fundamental requirements on all the different kinds of toys that had to be satisfied if anyone wanted to bring them into circulation in the European Union. What was true back then continues to apply, however: toys do not receive approval to enter European children’s rooms until certified laboratories have confirmed their harmlessness and have demonstrated and documented this by awarding them the CE mark, which indicates that testing has shown them to be safe; toys are not allowed to be marketed without the CE mark. Let us take a look at the details.

What is important with toys
To help consumers to choose suitable, safe toys, the German Ministry of Food, Agriculture and Consumer Protection (BMELV) has developed a “guide” that draws attention to action that should be taken before and after making purchases.

The rules that the Ministry of Consumer Protection says should be followed before buying are unmistakable in their clarity: “Inform yourself, ask critical questions and check for yourself!” The BMELV recommends that you do your homework first:

Last but not least: take a close look at all the details. Toys should not be allowed in children’s rooms even if only the smallest of pieces might come off and be swallowed. A quick reminder in passing here, however: the age of the child concerned is a major decision-making factor when shopping.

And once you have bought a toy?
Good advice is not at all hard to find: common sense alone can be very helpful. The general rule is: anyone who makes a critical visual and mechanical check of his children’s toys every now and again, i.e. picks them up and examines them, can prevent serious problems at an early stage by disposing of faulty toys without further ado. But what if the toy is new, has only just been bought? If there are instructions about how to use the toy – read them. This is particularly important with instructions about how to put toys together. The washing instructions should be followed with washable parts / toys.

No airplane takes off without an adequate check-up being made first: if toys are played with intensively, parts may come loose, paint may peel off or damage may occur. What is no longer in good condition should be disposed of. A critical examination at the right time can prevent harm being done.

The Plastics Trade Fair staff hope this article will help you to choose the right Christmas presents and enjoy a relaxing Christmas holiday.

Source: Text of the new EU Directive on the safety of toys
www.kindersicherheit.de/pdf/2009spielzeugrichtlinie.pdf