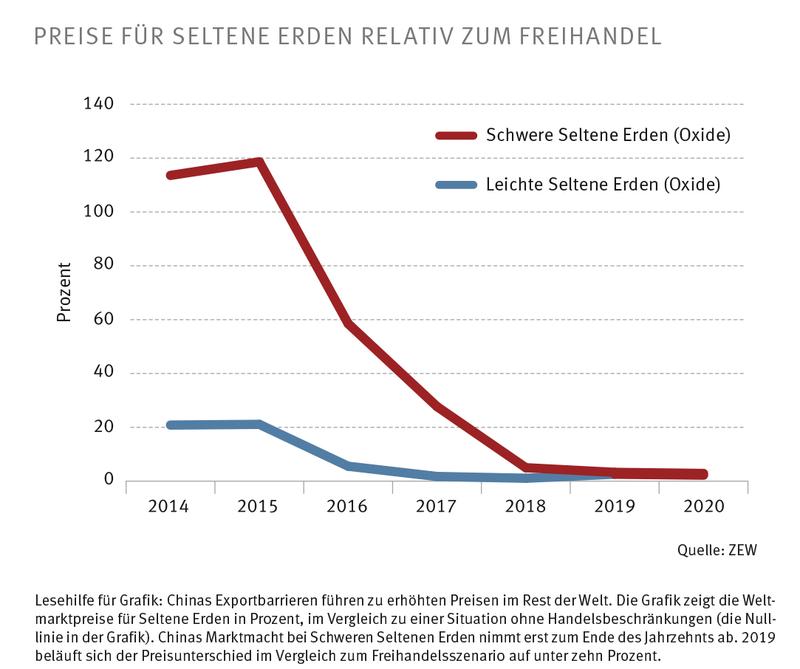 Despite serving as an indispensable input for numerous ubiquitous products, from powerful permanent magnets in hard discs to phosphors in TV screens, Rare Earths were virtually absent from public debate until a few years ago. China, which is accounting for more than 90 per cent of worldwide Rare Earth production, changed that recently. The People’s Republic tightened its export restrictions on the metals repeatedly from 2005 onwards. Hence, prices have increased continuously and skyrocketed in 2011. Under the impression of these events, more general discussions about the dependency on raw material imports emerged in the US and the EU alike (U.S. Department of Energy, 2011; EU Commission, 2010).

Chinese market power is neither exogenous nor static. If prices are sufficiently high, new suppliers can enter the market, in particular in case of Rare Earths, whose deposits are found in many parts of the worlds. China’s export restrictions increase prices in the rest of the world and encourage the expansion of supply. Thus, tight export barriers today can reduce market power in the future. When interpreting China’s power on Rare Earth markets, these dynamics have to be taken into account.

In this paper, I investigate to which extend China is able to exert power on Rare Earth markets until 2020 using its trade barriers and which welfare effects they imply. Exerted market power is measured as the price increase relative to a free trade situation. A dynamic partial equilibrium model allowing for endogenous investment in capacities and a disaggregated representation of the mining sector is developed. It represents the physical life cycle of the metals, from the extraction of ores to recycling or disposal. The model is calibrated using a novel dataset on Rare Earth mines. Scenarios are simulated to assess the influence that China’s most important policy parameters have on exerted market power: export quotas, export tariffs, and domestic production.

Partial equilibrium models of metal markets can be distinguished into two groups. The first is econometric models including Fisher et al. (1972); Fisher and Owen (1981); Slade (1980) and, more recently, Agostini (2006). This branch of literature proposes aggregate behavioral equations for supply, demand, price formation and recycling. The parameters are estimated econometrically and tested statistically. A second group of studies calibrates partial equilibrium models on metal markets (Winters, 1995; Demailly and Quirion, 2008). A recent example of this approach is Lanz et al. (2013). They develop a model for the global copper market taking into account transportation costs, recycling, and a disaggregated processing sector. It is used to assess carbon leakage induced by sub-global sectoral climate policy. These models do not consider endogenous capacity investments.