Topic of the Month January 2016

Part three of our series of articles about sustainability focusses on an application area in which successful trials appear to have been completed to replace wood – the dominant material up to now – by plastic or rather a polymer-based, fibre-reinforced composite which biodegrades completely without leaving any residue. 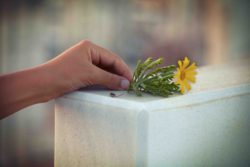 Funeral rites are as old as humankind itself. Our Stone Age ancestors laid their dead to rest in stone boxes. The Egyptians used basket-like structures made from plaited twigs, before they began to bury the high society in magnificent sarcophagi made from stoneware or clay. It was common practice in the Middle Ages and into the modern era to bury corpses wrapped in cloth and this is a procedure that is still followed nowadays in Islamic countries, for instance.

The introduction of coffins

At the beginning of the 19th century, a switch started to be made more and more to keeping the dead in wooden boxes in mortuaries, most of which in Germany and elsewhere were built close to cemeteries. This combination was chosen, on the one hand, for hygienic reasons. There were concerns that the dead – who were normally kept within the family – might transmit diseases and cause epidemics. Concerns that were justified, as the spread of ebola demonstrates.

On the other hand, mortuaries had an important psychological function. They took away people’s fears of being buried alive. When someone died or was declared dead, the lifeless body was taken to the mortuary and stayed there for at least two days under observation. This time was considered long enough to identify signs of certain death. In Germany and other countries, it is still specified that 48 hours have to pass between death and burial.

Coffins play an important role in coping with death

When a body is put in the coffin, this is a key moment for relatives in the process of saying goodbye and letting go. The coffin proves to be both an emotional and physical frontier. Functionally speaking, the coffin is a container that is used to transport, store and bury a body. Etymologically speaking, the German word for coffin (“Sarg”) comes from the Greek word sarkophagos, which means “flesh-eating”.

From the practical point of view, coffins are not required to satisfy any really exacting demands: coffins are used for burial in a cemetery and for cremation in a crematorium. They need to be big enough to hold a body, sturdy and stable enough to withstand handling, i.e. primarily storage and transport of the dead person, simple to produce and, if at all possible, not too heavy to carry comforably. If cremation is planned, combustibility is another essential criterion.

Wood, which has always been an important building material, was available in sufficient amounts in Europe, where it was also affordable. There were in addition enough experts in the wood-processing field; to this day, there are plenty of carpenters in rural areas who run burial companies on the side. A lucrative business, because – after all – people are always dying.

Hard times for undertakers and relatives

Times change and so do people. Everyone still dies eventually, but perhaps not quite as soon as in the past. Healthy lifestyles and medical progress have helped to reduce mortality rates or keep them consistent. General economic conditions have changed in the course of time too.

In Germany, for example, death benefits have been eliminated and the prices of wood have risen, while the costs of all the other aspects of a burial have increased too. Cheap imported coffins are very popular and many people already decide while they are still alive whether they want to leave with a bang or a whimper.

Anyone who does not find it difficult to choose a coffin while still alive removes a heavy burden from his or her relatives. The choice of an adequate but inexpensive model is often considered to be a reflection of the appreciation that the surviving family members have for the person who has died. 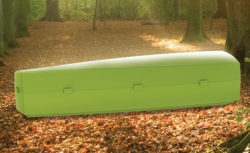 Functionally, the coffin is a container which is used to transport, the laying out and the burial of a corpse . But , the coffin must be made ​​of wood? Trend with future coffins made ​​of bioplastics. (Source: Onora)

Marieke Havermans’ mother-in-law had died and a coffin now had to be chosen for her. Havermans felt that the coffins available lacked class and individuality. They were very similar and more or less all of them were “dark, ugly and much too expensive” as Havermans remembers. In addition to this, many of the coffins were not even made of genuine wood any more; they were made of chipboard instead, a cheap building material that emits formaldehyde. Marieke Havermans is convinced that it is not dignified for any human being to end up surrounded by chipboard.

Marieke Havermans was certain that there could be better coffin solutions. Ones that were of high quality and at the same time sustainable, biologically harmless and compostable. Coffins that do not pollute the environment, are attractively designed and are available at affordable prices.

Although making coffins from biologically degradable plastic is not a new idea, there is a lack of specific products. This is what Marieke Havermans found out when she did her research. After considering all the data and facts, the Dutch woman came to the conclusion that the funeral market was ready for a change. She quit her job and obtained funding to set up the company Onora in ‘s-Hertogenbosch in the Netherlands in 2013. The aim of the company was to develop and market coffins made from biologically degradable bioplastic.

From the theoretical idea to practical implementation 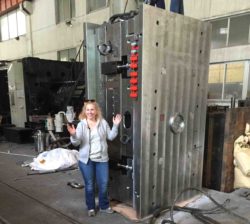 Made the Onora coffins were injection molded. The necessary massive injection molds for the casket shell and the coffin lid were developed in Germany and manufactured in China. (Source: Onora)

The objective was to produce a thoroughly environmentally sound coffin from organic materials that disintegrates naturally within ten years leaving no residue. It too quite some development skills and perseverance to reach this objective. As 2015 ended, Onora finally started series production.

The Dutch company uses a special fibre-reinforced composite material based on polylactic acid (PLA) and hemp fibres to produce its biocompatible coffins. According to Marieke Havermans, it was a challenge to determine and test the material that was suitable for the project and it required plenty of time-consuming research. Due to its molecular structure, PLA is biologically degradable, although specific environmental conditions are necessary for this purpose – of the kind that exist in industrial composting plants. An appropriate blend of PLA and bio-based additives had to be created so that PLA is degraded biologically under “cemetery conditions”. Marieke Havermans succeeded in doing this, however.

The Onora coffins are produced by the injection moulding process. The huge injection moulds required for the casket and lid were developed in Germany and manufactured in China. The coffin, a thin-walled container provided with reinforcement ribs and stiffening elements, weighs about 25 kilograms, which is half as much as an equivalent coffin made of wood, and can hold a body with a weight of up to 150 kg.

The costs of a conventional wooden coffin are made up not only of the wooden casket and the lid but also of the components needed for transport purposes, closure mechanisms and decorative elements. Since the company’s coffin is manufactured by the injection moulding process, handles, connection elements or other features can be integrated in a single operation. Screws or adhesives are not needed, so that costs are saved.

Using a composite plastic material also provides creative scope in coffin design. Marieke Havermans has given her coffin a “soft” design, with rounded corners and an organic shape that is more reminiscent of a cocoon than a coffin. The coffins are supplied with a mattress, pillow and cover made from organic fabric, hemp or hemp fibres and organically grown cotton as well as wool that has been obtained in the Netherlands in an environmentally responsible way.”

In the foreseeable future, Onora intends to produce a variety of coffin models made from bioplastic and market them throughout Europe. At the current time, the company’s development department is working on further interesting design elements. In addition to standard coffins, the company reports that it will also be supplying models in future in different colours as well as with further individualisation options. The product range is, in addition, to be expanded to include urns. 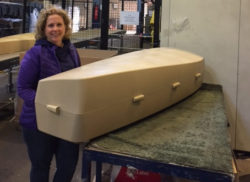 Marieke Havermans is satisfied with what has been achieved so far. And she is certain that her organic coffins will establish them on the market successfully. Business is starting in the Netherlands and Belgium. Marieke Havermans is convinced that the time is ripe for a pioneering new coffin. Here is what the company itself has to say on its website http://onora.eu/de:

“Onora produces ecological coffins. We are the only company in the market that produces 100 percent sustainable coffins. Our coffins are fully biodegradable. Our philosophy is “from Cradle to Grave” and our coffins do not pollute the soil or the air (after a cremation). In addition, the environmental impact is much smaller than that of a standard coffin and even smaller than that of other ecological coffins. The coffins are produced ​​in the Netherlands and made from organic waste, so we use less and better material for the production of our coffins.“

Marieke Havermans is receiving strong confirmation: the coveted “Wood and Natural Fibre Composite Award 2015” was presented at the world’s biggest international “Sixth WPC & NPC Conference” organised by nova-Institut GmbH in Cologne / Germany. This innovation prize was awarded for new materials and products from the wood-polymer composites (WPC) and natural fibre composites (NFC) industry that were launched or were about to be launched on the market in 2015. The over 220 conference participants chose the three winners from six nominees.

Marieke Havermans’ company Onora took first place with its 100 per cent bio-based coffin made by injection moulding technology and involving hemp fibre reinforcement. The press release published by nova-Institut GmbH says: “The participants chose the 100% bio-based coffin that is reinforced with natural fibres to be the easy winner. The product is injection moulded, which creates great scope for design variability where both shape and colour are concerned. The bio-based composition of the coffin makes it biologically degradable and is an example of the new large-volume applications for organic composite materials. The life cycle analysis reveals a CO2 footprint that is low by comparison not only with conventional coffins but also with other organic coffins.”

For the sake of completeness, here is some information about the products that came in second and third: second place was taken by Millvision BV, which is also a Dutch company. It won the prize for a flower pot made from a biologically degradable organic composite material incorporating residual agricultural fibres: “The nominated flower pots are produced at competitive prices from residual agricultural fibres from paprika and tomato farming and bio-based plastic. They are used in nurseries and are biologically degraded within a few months, even when the ground is cold. The innovative new flower pot acts as a fertiliser – thus promoting plant growth – and avoids the plastic waste produced with oil-based flower pots as well as the work involved as a result.”

Third place was taken by the Finnish companies Aqvacomp Oy and Flaxwood Oy, which manufacture musical instruments from polystyrene reinforced with cellulose fibres: according to the official statement, “these new materials have the potential to substitute the use of rare and endangered wood species. Formulations with appropriate property profiles have been developed for various instruments, for example a cellulose fibre composite material, which can replace grenadilla wood in clarinets. The components have excellent heat and moisture resistance properties, so that the typical problems encountered when tuning wooden instruments are reduced.”

More information about the winners and the other nominated candidates, the innovation prize and the WPC & NFC Conference in Cologne can be found at  http://wpc-conference.com