Pleasantly warm in winter – with plastic 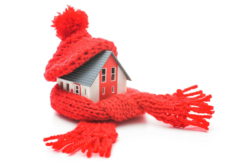 It is one of the consequences of climate change: milder winters, during which Central Europe is only covered with snow on a large scale now and then. We should not be deceived by this, however: winter – in the northern hemisphere at least – is still the coldest time of the year. Which we prefer to spend indoors where it is pleasantly warm. Plastics help to keep the temperature up and reduce heating expenses.

Up to two thirds of the warmth generated by heating systems is lost through the outside walls, basement and roof of a detached house that is not insulated. This means that some 2,000 litres of heating oil are wasted every year. Houses need a sound jacket of modern insulation materials, in order to prevent heat loss and reduce energy consumption.

Such insulation materials achieve far more than even the thickest of walls: a concrete wall that is a good one metre thick does not insulate any better than standard insulation material which is only two centimetres thick. What are known as “passive houses” with an insulation layer that is up to 40 centimetres thick hardly ever need to be heated as a result – a comfortable room temperature is reached here primarily due to the “heat” generated by the residents themselves. 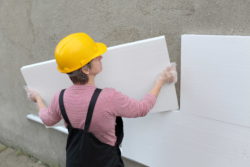 The classic insulation materials that are in use include:

Renewable natural materials are suitable for heat insulation purposes inside houses, but are not a viable option for external insulation, because they absorb a great deal of water and are highly flammable. Another criterion that determines the suitability of insulation material is the lowest possible heat permeability level. A good insulation material is highly resistant to thermal energy, i.e. it is a poor heat conductor. Thermal conductivity is measured in watts per meter kelvin, which is abbreviated as W/(m.K). The term “lambda” (λ) is used in the building industry.

So: the lower the coefficient of thermal conductivity, the higher the insulation capacity of the material: 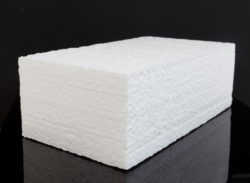 The most important entirely synthetic plastic in the heat insulation field is polystyrene foam. It is based on styrene (C8H8), which is produced from benzene (C6H6) and ethylene (C2H4) in oil refineries. In the presence of catalysts or higher temperatures, styrene polymerises into polystyrene: the monomers form chains of macromolecules; the material does not rot and its water absorption capacity decreases.

Expanded rigid polystyrene foam (EPS) is the material in most widespread use. Polystyrene granulate, in which pentane (C5H12) has been incorporated as a blowing agent, is used to manufacture it. When it is heated up to more than 90°C, the pentane evaporates and expands the original material to 20 – 50 times its volume. Blocks, panels and parts with other shapes can then be produced from EPS by further treatment with hot air.

Extruded rigid polystyrene foam (XPS) is produced by a continuous extrusion process. Polystyrene is melted in an extruder, after which it is pressed through an opening (extrusion) following the addition of carbon dioxide (CO2) as a blowing agent. This extrusion process shapes the foam as well. The XPS forms after the die. Its thickness can be varied appropriately by adjusting the width of the extruder opening.

EPS and XPS resist ageing and moisture and conduct little heat, so they satisfy the most exacting of heat insulation requirements. Both foam plastics need to be shielded against UV radiation, however, because sunlight makes them brittle and turns them yellow. Their life cycle analysis is adversely affected by the use of blowing agents. Pentane, for example, contributes to summer smog, although it does not reach the stratosphere. Partially halogenated chlorofluorocarbons (HCFC), which played a role in the production of XPS in the past, are not used in Germany any more.

Polystyrene already became the leading insulation material in the 1960s. It became universally known back then under its trade name “Styropor”. The extremely light material (it consists of up to 98 per cent air in the pores) had been invented in 1949 by Fritz Stastny (1908 – 1985), a chemist who worked for BASF in Ludwigshafen / Germany. The company recently succeeded in optimising EPS (“Neopor”), the thermal conductivity level of which has been reduced to 0.032 W/(m.K) in this context. This has been achieved by the addition of graphite particles to the unprocessed granulate. The foam plastic panels, which are an iridescent silvery-grey colour as a result, now absorb infrared radiation as well, which reduces the transmission of thermal energy even more. Neopor panels can therefore be up to 30 per cent thinner than conventional polystyrene panels, so that insulation structures can be considerably thinner too.

Foam plastics made from polyurethane (C3H8N2O) are also popular heat insulation materials in the building industry. They are formed via the addition polymerisation reaction of diols and/or polyols with polyisocyanates (blowing agents). The reaction mixture is poured into moulds, in which both the final foaming process and the hardening process are carried out under the influence of pressure and heat. The blocks of foam are then cut into panels or sheets. Rigid polyurethane foam is used as an insulation material on both flat and pitched roofs, where it has to be protected against UV light like polystyrene does.

The patent for the production of polyurethane was granted in 1937. It was invented by Otto Bayer (1902 – 1982), a chemist who worked for I.G. Farbenindustrie in Leverkusen / Germany. Polyurethane has been used for insulation purposes in, for example, buildings, freight containers and refrigerators, since the 1950s. Global consumption was more than 12 million tonnes in 2007 and is continuing to increase.

The plastic polyisocyanurate is related to polyurethane, but is more chemically and thermally stable. The methylene diphenyl diisocyanate 4,4’ (MDI) content is higher than in polyurethane. In addition to this, the reaction partner used is a polyester polyol instead of a polyether polyol. Polyisocyanurate includes the tautomer isocyanic acid (1,3,5-triazine-2,4,6-trion) as a structural element. Polyisocyanurate is used as a heat insulation material for buildings in the form of rigid foam panels. It has one of the lowest thermal conductivity levels at 0.023 W/(m.K), which is thus among the best of the classic insulation materials.

Netzwerk Innovative Dämmtechniken, which is associated with the Arbeitsgemeinschaft für zeitgemäßes Bauen (www.arge-sh.de) that is based in Kiel / Germany, is working on even more efficient heat insulation by researching such options as the use of vacuum insulated panels (VIPs). Thermal conductivity levels of between 0.003 and 0.008 W/(m.K) can be achieved with VIPs. This means that a vacuum insulated panel which is only 20 millimetres thick can replace a polystyrene foam panel that is ten times as thick. The structure of VIPs is similar to a thermos flask: a gas-tight enclosure surrounding a rigid core from which the air has been evacuated. Foam plastics with open pores (lambda value: 0.008 W/(m.K) are a suitable core material, for example; plastic films on which aluminium has been deposited via evaporation are the standard material used for the enclosure. The improvement in the insulation performance is attributable primarily to the vacuum; if the vacuum is lost, because the enclosure has been damaged, the thermal conductivity level increases drastically, i.e. the VIP loses its benefits almost completely.

Plastics do not let us down in winter outdoors either: thermalwear made from synthetic textile fibres – polyester in particular – keeps the cold out. The material does not freeze and is both wind-resistant and watertight. And it keeps the body not only warm but also dry, because it transmits sweat and condensation moisture, so that both can evaporate. Polyacrylic and polyamide (nylon) are also used in thermalwear.

It is not unusual for rainsuits, gloves or boots in particular to be coated with polyvinyl chloride (PVC). This material’s durability and resistance to environmental influences are second to none – neither acids nor temperatures of up to minus 50°C can harm it. PVC will already be celebrating its 100th birthday in the coming year: in 1912, Fritz Klatte (1880 – 1934), a chemist who worked for Griesheim Elektron and later Hoechst AG, succeeded in polymerising vinyl chloride (C2H3Cl). It did not prove possible to develop a marketable product, however, so Griesheim Elektron gave up Klatte’s patents in 1926. In the year when the inventor died, BASF managed to produce PVC that no longer disintegrated. After 1945, PVC became the most-produced plastic in the world and proved to be an extremely popular choice for window frames, floor coverings and – last but not least – gramophone records.

Incidentally: protection against the cold is not only an issue in winter where workwear is concerned: anyone employed at cold-storage warehouses or refrigerated laboratories wears special clothing that complies with DIN EN 342 (“Garments for protection against the cold”) all year round. Comparable measures are advisable occasionally in leisure activities too: to avoid hypothermia, water sports enthusiasts like divers and surfers wear full-body suits made from polychloroprene, which is better known by its trade names “Neoprene” (manufacturer: DuPont) or “Baypren” (manufacturer: Lanxess). It is produced by the polymerisation of chloroprene (2-chloro-1,3-butadiene; C4H5Cl). Vulcanisation makes it resistant to chemicals and weathering. In contrast to most other unsaturated elastomers, polychloroprene cannot be vulcanised with sulphur; metal oxides (ZnO, MgO) are used instead. If the vulcanisate is subsequently foamed with the help of chemical blowing agents, it is given the properties that make it ideal for thermal insulation.

A tough, watertight material – vulcanised rubber (inventor: Charles Goodyear, 1800 – 1860) – was already available for diving suits as early as 1839. The thermal insulation capacity of this material was not important, because divers were able to stay warm by wearing woollen garments in this drysuit. Divers do not remain dry in the wetsuits made from neoprene (invented in 1930, on the market since 1954) that are standard nowadays, so it is better if they wear nothing underneath them. Because water gets inside the suits – not by accident but by design: there is supposed to be an exchange of heat with the surroundings due to the circulation created by movement. It goes without saying that this is only enjoyable where the water is warmer, such as in the Red Sea or the Indian Ocean. Professional divers wear a special suit, into which hot water is channelled, when they are diving in colder waters. What is more practical is a “semi-drysuit”, which is even suitable for diving in icy waters. Watertight sealing prevents water exchange here; as is the case with wetsuits, the neoprene provides heat insulation.