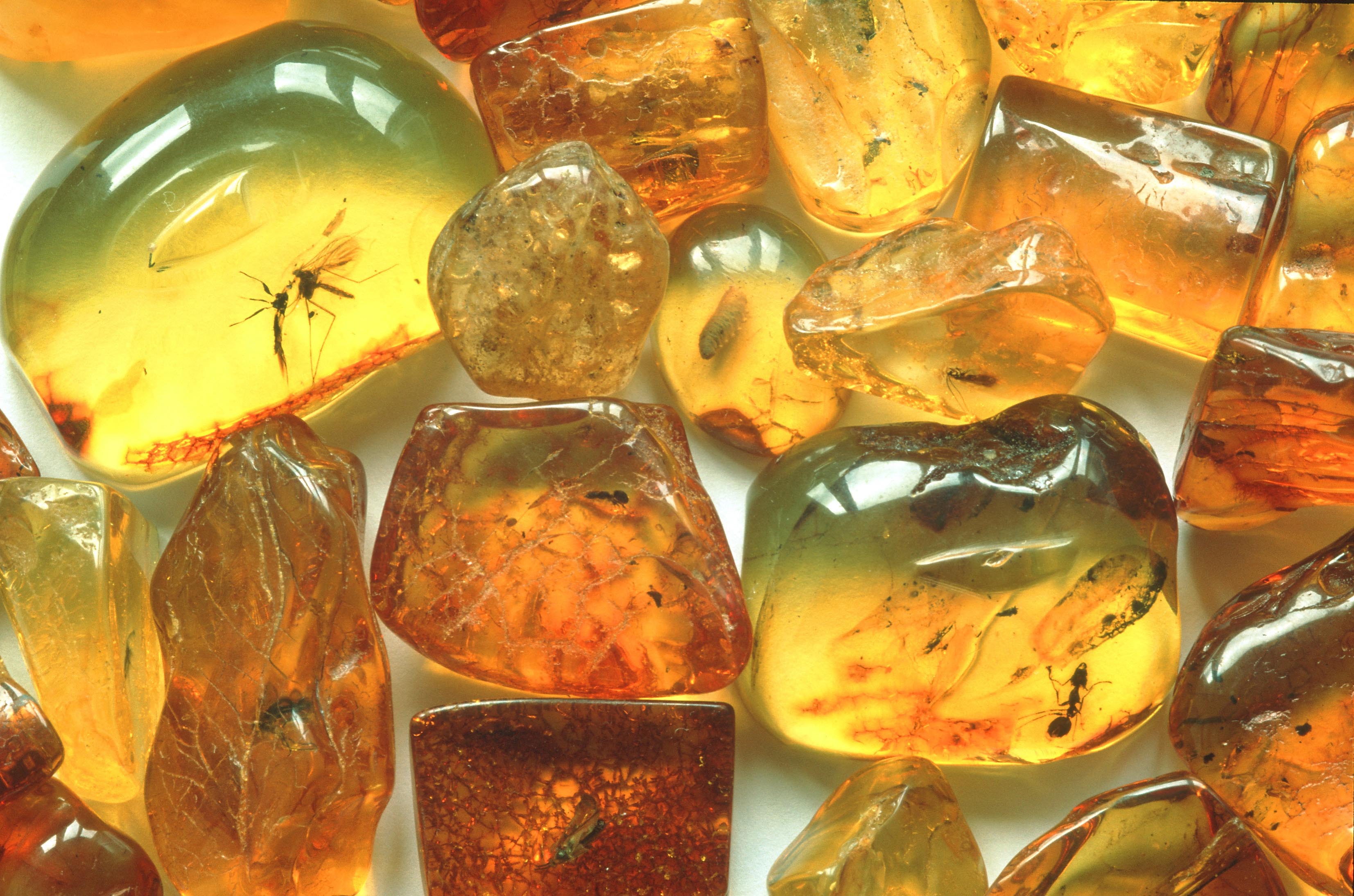 Determining the authenticity and origin of amber

Very few people may suspect that amber is an extremely popular material in the jewellery, art and wellness fields. Special technology is needed to check the origin and authenticity of this natural polymer. Scientists from different disciplines are co-operating closely on this.

Oluwadayo O. Sonibare and Thorsten Hoffmann from the Institute of Inorganic and Analytical Chemistry and Stephen F. Foley from the Geosciences and Earth System Research Department are looking for a way to determine the origin and authenticity of amber exactly.

Amber – which is also known mineralogically as succinite – was originally a tree resin that escaped from pine trees or other conifers millions of years ago and solidified in contact with air. Large amounts of the dried resin made their way into the sea, sank into deep sediment layers, were covered by dust, sand and stones and were turned into amber in the course of time under high pressure in the absence of air. Most of the amber that is found can be dated back to the Tertiary, i.e. it is about 55 million years old, although there are some samples that do not go back this far.

What all amber has in common is the fact that the same organic material is involved, which originally escaped from a host tree as resin and then solidified. Chemically speaking, amber is an inconsistent blend of substances that can be called polyester (more or less) and can be included in the terpene group.

The word “Bernstein” goes back to the Low German word “bernen”, which means “to burn”. And amber is in fact flammable, burning with a highly aromatic odour. Amber only dissolves to a limited extent in alcohol, ether, chloroform or turpentine oil. When it is ground, the material charges negatively and melts at 375°C. Due to its chemical and physical properties, it proves to be sensible to subject amber first of all to pyrolysis with subsequent gas chromatography of the pyrolysis fragments and their mass selective detection, in order to obtain information about its composition and thus its nature and origin. 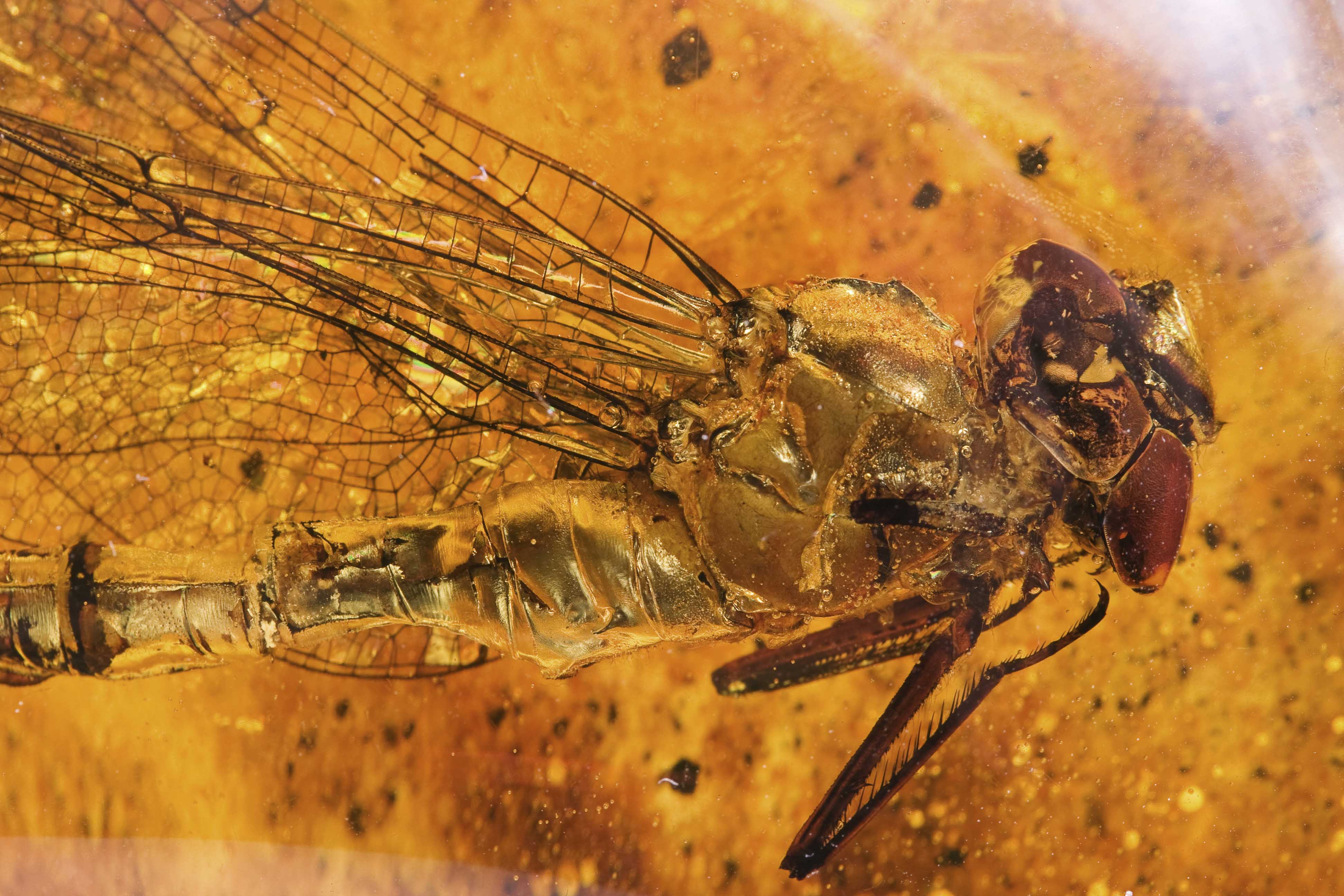 Amber sometimes encloses and preserves the bodies of insects or plants that are millions of years old too. (Source: istockphoto)

Incidentally: it took at least one million years before the material developed into what can be classified as amber. The Baltic amber found in the Baltic Sea is one of the very oldest amber materials. Amber is found in many different countries, such as England, Portugal, Spain or Italy as well as in Canada, Mexico, Japan, the Dominican Republic, Madagascar and Borneo.

People find amber “fascinating because of its varying colours, its high light refraction and its golden yellow lustre after polishing. Amber feels sensual and warm and weighs surprisingly little. You want to touch it, wear it on your skin, hold it in your hand. It is still a popular pastime to collect amber on the Baltic Sea coast, because it is said to have healing, painkilling and soothing powers.” [3] Amber sometimes encloses and preserves the bodies of insects or plants that are millions of years old too.

The recommendations made by the German Amber Museum – to identify materials in question by comparing their density in salt water [1] – may well be adequate to provide rough guidance in this context, but they are not good enough when a scientifically sound investigation is involved – and that is what the research scientists are interested in. Their objective is “to determine the molecular composition and chemotaxonomic aspects of Eocene amber from the Ameki Formation in Nigeria” [2]. With funding from the Alexander von Humboldt Foundation, Sonibare and colleagues are, among other things, using infrared spectroscopy (which has been described in sufficient detail in the literature about amber analysis) and gas chromatography with mass selective detection (GC/MS), in order to determine the molecular composition of different fossil plant resins.

R&D Project Manager Dr Eike Kleine-Benne is sitting at a conference table talking to Oluwadayo O. Sonibare about the characteristics of amber as well as the problem faced when trying to pinpoint where genuine amber originally came from and to identify fake amber, in a nutshell: they are discussing the options available for analysing the composition and determining the specific properties of amber. A detailed examination of the sample material has proved to be sensible and right when choosing the appropriate analytical technology. 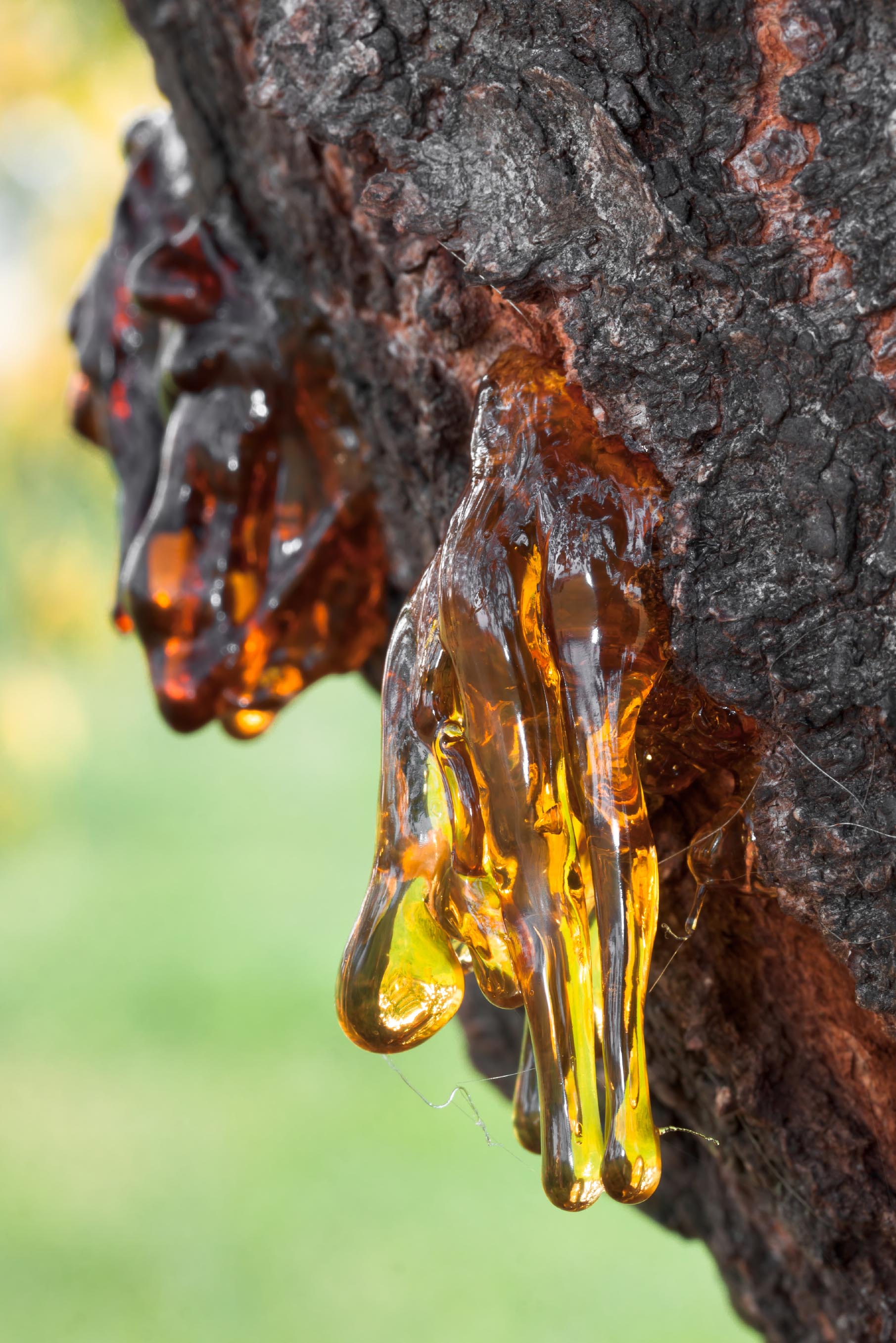 Amber – which is also known mineralogically as succinite – was originally a tree resin that escaped from pine trees or other conifers millions of years ago and solidified in contact with air. (Source: istockphoto)

Dr Oluwadayo O. Sonibare explains that the fossilisation of plant resin – which is what happens in the development of amber – is a complex maturing process that involves the loss of volatile components as well as the polymerisation and crosslinking of terpenoids and takes up to 100 million years to complete. He points out that amber is a complex blend of different terpenoids (mono-, sesqui, di- and triterpenoids), natural substances that are derived structurally from isoprene that is emitted by plants. In contrast to terpenes, terpenoids contain functional groups. The scientist emphasises that knowledge about the chemical composition of amber is useful in order – on the one hand – to enable authentic amber to be distinguished from imitations and – on the other hand – to make it possible to determine its origin or carry out more extensive studies.

Important analytical methods for the characterisation of amber are infrared spectroscopy (IR), Raman spectroscopy and GC/MS analysis of amber extracts and/or pyrolysis of the amber itself with subsequent GC/MS analysis. Dr Eike Kleine-Brenne reports that infrared spectroscopy (IR) is used, for example, to distinguish Baltic Sea amber from other amber that is found. The main distinguishing feature here is apparently an unmistakable section in the IR spectrogram known as the Baltic shoulder at 1,250 to 1,175 cm–1; Dr Kleine-Benne explains that it is associated with succinic acid that is present in Baltic Sea amber.

According to Dr Eike Kleine-Benne, the limitations of the IR method are quickly reached when differentiation according to the nature and origin of the amber is required, however, because most types of amber have similar patterns in the IR spectrum, which makes it more difficult to identify individual features. Raman spectra, on the one hand, are, useful to identify differences in the maturing process of amber but not to determine its geographical origin. GC/MS only makes it possible, on the other hand, to determine the molecular structure of soluble components, although they rarely account for more than 20 per cent of the total resin.

The solution is a combination of different approaches

Pyrolysis GC/MS is different; as Dr Eike Kleine-Benne explains, this enables the user to separate the polymer components, i.e. the non-soluble and non-volatile macromolecules of the amber, into individual components and to identify them clearly in the mass spectrum according to their molecular structure. 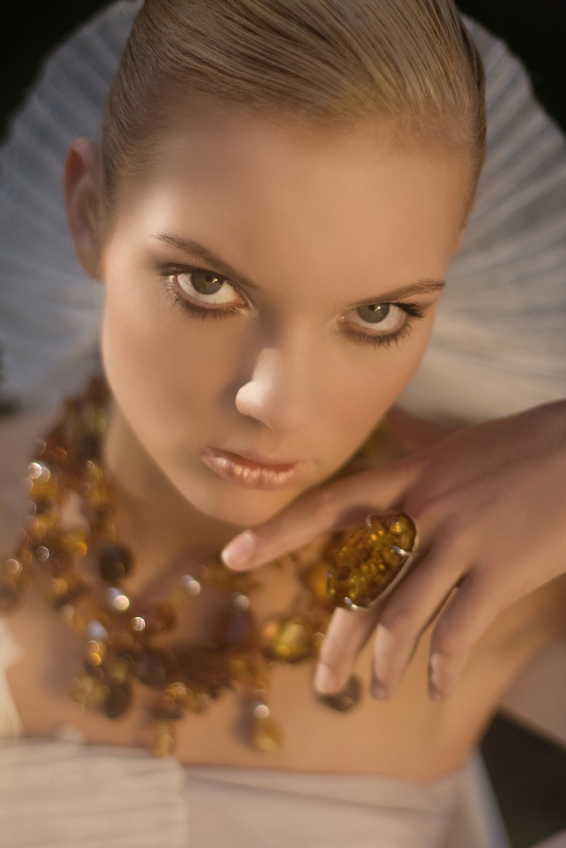 People find amber fascinating because of its varying colours, its high light refraction and its golden yellow lustre after polishing. Amber feels sensual and warm and weighs surprisingly little. You want to touch it, wear it on your skin, hold it in your hand. It is still a popular pastime to collect amber on the Baltic Sea coast, because it is said to have healing, painkilling and soothing powers. (Source: istockphoto)

Dr Oluwadayo O. Sonibare reports that a previous study provided the first information available about the molecular composition of fossil resins from the Eocene Ameki Formation in Nigeria. Pyrolysis GC/MS analyses made it clear that the amber belongs to Class 1B, which is derived from standard labdatrien structures that lack succinic acid. The pyrolysis products of the amber were dominated by labdane-like diterpenoids and some sesquiterpenoids. The fact that only labdane diterpenoids were present in and plant triterpenoids were absent from the amber suggests that this resin came from a conifer (gymnosperm). As a result, Dr Oluwadayo O. Sonibare, Professor Thorsten Hoffmann and Professor Stephen F. Foley from Johannes Gutenberg University in Mainz now have an instrument that helps them to determine the origin of amber, in addition to obtaining extensive information for their amber research: Dr Eike Kleine-Benne reports that the second scientific publication is set to appear in a recognised journal in the near future.

Further information in the Internet
Amber (known in German as “Bernstein”, from the Middle Low German word “Börnsteen” = “Brennstein”) is the word used for the clear to opaque yellow gemstone consisting of fossil resin that has been known for thousands of years and is particularly common in the Baltic Sea area. …

-> For more information, go to en.wikipedia.org/wiki/Amber