Innovation for the material of the 21st century

Germany is by far the most important location for plastics manufacturing in Europe. About one third of the European plastics production is German-based. On a global scale, Germany is among the most important plastics producing countries, with a share of eight percent of the global production. In 2015, more than 18 million tons of plastics were produced here, a plus of 1.4 percent compared to the previous year. The plastics manufacturers turnover was more than 24 billion euro. The production in the current year has, according to first estimates, again developed positively. Despite a gloomy development of the global economy, the plastics manufacturing industry in Germany is in a moderate upwards trend.

The most important market for plastics in Germany is packaging, with more than one third of the total share of demand. Next, with 24 percent, is the building and construction sector, then, with nine percent, automotive, and with about six percent the electrical/electronic industry. Regarding foreign trade, the countries of the European Union are of outstanding importance. Thus, about three quarters of the German exports account for countries within the European Union, while almost 90 percent of the imports came from there. The most important customer country for Germanmade plastics was Italy, followed by France, Poland and the Benelux countries. Largest importers were the Benelux countries, followed by France, Poland and Italy. The German plastics manufacturers are strong in export: In 2015, 12.8 million tons of plastics with a value of 23.6 billion euro were exported, a slight plus of 1.5 percent compared to previous year. The imports amounted to 9.3 million tons, value was 15.4 million euro. This resulted in a foreign trade surplus of 3.5 million tons or 8.2 billion euro.

It is a particular strength of the German plastics manufacturers to provide innovative and high-quality products, to maintain a high level of investment in research and development, to closely cooperate within the value chain and to be close to the customers. The plastics manufacturers in Germany are “cautiously optimistic” that the moderate growth from the previous year will continue in 2016, and that the industry benefits from the growing global demand for plastics. 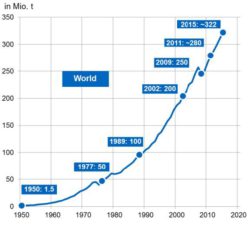 PlasticsEurope Deutschland e.V. represents the economic and political interests of the plastics manufacturers in Germany. By occupying technical subjects, via press and public relations as well as by providing surveys and data analyses on the economic outlook of the industry, PlasticsEurope Deutschland became an important contact for ministries, authorities, associations, media, non-governmental organisations and further stakeholders.

One of the current priority themes of the association is to present plastics as an innovation driver and a big contributor when it comes to better protect the environment and increase sustainability. It is a fact that the material plastics saves resources in numerous applications and products, be it as an efficient packaging, as a modern lightweight component for vehicles or as a thermally perfectly insulated window.

Even at the end of the use phase, plastics has much to offer. Thus, about 99 percent of all post-consumer plastics waste in Germany is recovered through recycling and energy recovery processes. Recycled plastics are used to manufacture a wide variety of new products, mainly used in the packaging or agricultural sector. However, in many regions of the world, efficient waste management systems are still missing and often, there is a lack of knowledge within the population on how to handle plastics waste properly. International conferences for marine protection like “PolyTalk”, European initiatives like "Zero Plastics to Landfill" or the European Youth Debating Competitions, a joint project of PlasticsEurope and the European Petrochemical Association EPCA where youngsters discuss about sustainability and petrochemistry, are examples for the commitment of PlasticsEurope to raise awareness for a sustainable plastics waste management.

In 2016, the special show, a project of the German plastics industry under the leadership of PlasticsEurope Deutschland e.V. and Messe Düsseldorf, is supplementing K’s exhibition array for the 9th time. Under the motto “Plastics shape the future”, the special show will highlight the developments that are already taking shape and the visions that may become reality tomorrow. With reference to examples, the show demonstrates to what extent plastics are making their mark on modern living spaces – functionally, aesthetically and sustainably. An innovative booth design as well as a wide range of media offers with films, slideshows and infotainment should attract the international fair visitors. Key element of the special show are the seven theme days with lectures, presentations and panel discussions on “Plastics Industry 4.0 / Internet of things”, “New Materials”, “Lightweight Design”, “Marine Litter”, “Youth and Education“, “Plastics meet Design” and “Resource Efficiency”. Plastics shape the future promises telling insights and perspectives on the future for exhibitors and trade visitors to K 2016 as well as for the media and the general public – and is therefore one of the central contacts for all questions relating to plastics and the plastics industry.

For more information
Association of plastics manufacturers in Europe