Plastics production is a field in which not only chemists, process engineers or machine and equipment manufacturers are involved. The trend towards greater sustainability and the use of natural resources has led to more interdisciplinary activities in this area of research and application. More and more experts from other disciplines, such as biology or biotechnology, are in the meantime making valuable contributions to the development of sustainable plastics. Sina Weidenweber and Ulrich Ermler from the Max Planck Institute of Biophysics in Frankfurt and Robert Marmulla and Jens Harder from the Max Planck Institute for Marine Microbiology in Bremen have, for example, succeeded in clarifying the spatial structure of an enzyme as well as its bonding to certain plant fragrances known as terpenes, from which the components needed to produce, for example, nylon and other polymer materials can be obtained.

All over the world, research scientists are working on the greater and greater use of sustainable sources to satisfy the needs of the plastic and rubber industry for raw materials. Hydrocarbon compounds, which are obtained primarily from mineral oil, are required for plastics synthesis; practically all the substances used in organic chemistry can be produced from mineral oil. The basic process is well-known and -established. Mineral oil is not the only possible raw material source, however. All biomass, i.e. the residue of animal and plant life (the basis of all fossil fuels), is de facto suitable for this purpose. 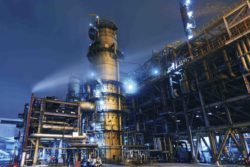 Over 10 million tons of butadiene and isoprene are annually produced under considerable energy consumption from fossil fuels, a market of over 15 billion euros. Source: istock /zorazhuang

Butadiene and isoprene are intermediate products in the manufacturing of nylon, high-melting plastics (ABS polymers) and rubber. Up to now, butadiene is produced from mineral oil in a laborious process. It is estimated that more than ten million tonnes of butadiene and isoprene are manufactured per year involving the use of substantial amounts of energy generated from fossil fuels: a press release about this subject issued by the Max Planck Institute indicates that the market apparently amounts to 15 billion euros.

High oil prices and growing demand already led to a search for alternative manufacturing methods and raw material sources for plastics production years ago. Investigations have been made of, for example, sustainable resources, including renewable raw material sources and viable plant and food residue. The most recent articles in the “Topic of the Month” section have highlighted various research activities in this field as well as practicable and future solutions.

Essential oils – interesting approach for the production of sustainable plastics

Sina Weidenweber and Ulrich Ermler from the Max Planck Institute for Biophysics in Frankfurt liaised with Robert Marmulla and Jens Harder from the Max Planck Institute for Marine Microbiology in Bremen to search for another attractive alternative. The research scientists examined the microbial processing of plant fragrances and essential oils, which – chemically speaking – are terpenes / monoterpenes and monoterpene alcohols. What are involved here are natural hydrocarbon compounds with ten carbon atoms, and the basic structure with five carbon atoms can be used as the preliminary stage for plastics production [1].

Let us take a look at the chemical details first: sorry about this, but a few basic scientific facts are essential here. Terpenes / monoterpenes are the main component of such essential oils as eucalyptus oil or peppermint oil. Monoterpenes are produced naturally in plants; the secondary plant substances are made by metabolism and carry out different functions. Released as volatile fragrances, plants use them to attract pollinators or to fend off enemies.

We encounter monoterpenes not just in the typical rose fragrance, for example, which is based on the compound geraniol, or in the distinct scent of pine forests. We encounter terpenes over and over again in our daily lives. They are found in food and are used as an ingredient of medical drugs and cosmetics. One well-known example – limonene – is found not just in citrus fruits, as the name suggests, but also in caraway, coriander and numerous other plants. This natural substance is often used as a solvent, so it can be found in cleaning agents and lacquers.

Interesting insight into the structure of terpenes

Let us take a look at the chemical structure of terpenes, which everything indicates will be becoming more and more important to polymer research scientists in future. One of the basic elements of terpenes is isoprene; this molecule with five carbon and eight hydrogen atoms (C5H8) is a classic representative of the hydrocarbon compounds that are of interest for plastics manufacturing.

Monoterpenes consist of two isoprene molecules (C10). Other terpenes are made up in turn of even more of these basic molecules, for example sesquiterpenes from three (C15) or triterpenes from six (C30) carbon and the appropriate number of hydrogen atoms. The range that Mother Nature offers research scientists is extensive: hundreds of monoterpenes have been discovered and classified in the meantime. Polymer research scientists have an enormous field to experiment in here – and one which still needs to be explored intensively until terpenes form the basis for the production of plastics on an industrial scale. The Max Planck research scientists have taken a major step forwards here.

From nature to the laboratory to industrial application

What is known so far is that monoterpenes are produced within the plant and in bacteria in the course of sufficiently understood metabolic processes. The transformation of a terpene called geraniol that smells like roses, for example, into coriandrol ((S)-linalool) that smells like coriander and then into myrcene, that gives hops their unmistakable smell, does not happen by itself, however; it requires the use of a catalyst instead.

What a catalyst does is to attach itself to a compound, thus modulating its chemical properties in such a way that Mother Nature needs to invest less energy and effort into changing / metabolising said compound. The catalyst remains completely unchanged during this process and can carry out its assignment over and over again elsewhere.

Enzymes take over the assignment of biocatalysts in bacteria, plants and animals. What is involved in the above-mentioned example of the transformation of geraniol into myrcene is called linalool dehydratase isomerase. The scientists write [1], however, that this enzyme is also able to produce such basic substances as isoprene or butadiene from different products of fermentation processes. Dier Biotechnologie, for example, produces active substances, that are normally produced by the human, animal or plant organism, in large fermentation plants with the help of modified bacteria, fungi or yeasts. Basic materials for manufacturing plastics will be joining the list of biotechnological products too in future.

Closer to a solution 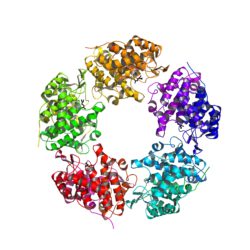 Structure of linalool dehydratase/isomerase. Five identical proteins form a five-membered rosette. In black, the substrates bound on the enzyme are shown. In a shell of protein helices lies the substrate, which is contacted by a loop of the adjacent protein. (Source: S. Weidenweber et al.)

Sina Weidenweber and her colleagues have at least taken a major step in this direction by succeeding in clarifying the structure of the enzyme linalool dehydratase isomerase and the way in which it bonds to molecules. The scientists conclude that the catalytic capabilities of linalool dehydratase isomerase at any rate make it eminently suitable for this assignment. It is reported that numerous patent applications have been filed and patents obtained in the meantime for use of this enzyme in the production of butadiene and isoprene on the basis of the discovery of the enzyme by research scientists from Bremen in 2010.
Guido Deussing