Aerogels: a flyweight amongst high-tech materials 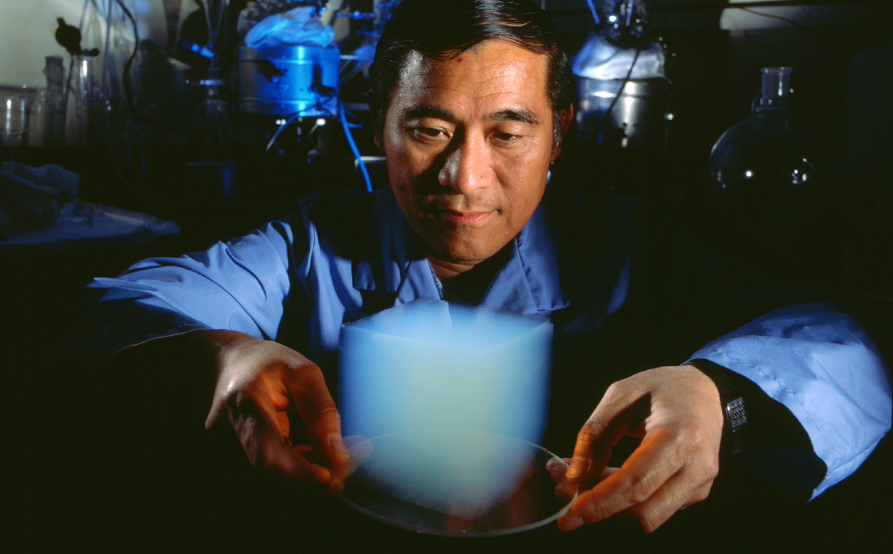 While the stability and performance potential of materials were once equated with high weight and hardness, over the last decades the trend has been going in a very different direction. Modern materials are lightweight and extremely high-performance at the same time. The demand for maximum resilience, flexibility, and cost efficiency has led to the development of materials that combine the advantages of different material types, for example in composite materials made from synthetic or natural fibers and plastics. Material research and development appear to have turned into a perpetuum mobile as they continue to present new material after new material. Nowadays nano-structured aerogels are ready to take their place in the spotlight – and stimulate the polymer development at the same time.

It is fair to assume that US American Samuel Stephens Kistler (1900-1975) [1] is known to only few people, most of them scientists in material development. Kistler was probably even less well known in his lifetime than he is today, years after his death. Kistler probably has received more recognition posthumously than he ever would have dreamed of or even remotely considered. The invention of aerogels, however, has secured Kistler a place in the hall of fame of material research.

Revolution in material research
Aerogels are fascinating, milky transparent solid bodies that are able to deceive the observer: although voluminous, the material feels weightless and insubstantial. Its bluish shimmer evokes an impression of frozen smoke, which is contradicted by a very warm feeling when it is held in the hand. Aerogels consist of a complex three-dimensional network using silicic acid or silicon oxide (SiO2) as their basic component. Other materials such as graphite or plastics are also possible. The proportion of solid components in aerogels is relatively low, barely one to five percent. The largest part is – casually put – air and holes, therefore the name aero-gel. Common gels contain liquids, so do the aerogels, at least at first. Over the course of a complex process the moisture in the gel is removed and replaced by air. What remains is a web- or honeycomb-like structure, the gel skeleton, which in size and expanse corresponds nearly exactly to the volume of the original gel. Aerogels have been shown to be the lightest solid materials in the world. According to the Guinness Book of Records, in 2003 an aerogel was produced in the USA with a density of 1 milligram per cubic centimeter (mg/cm³). The density of air is 1.2 mg/m³ [3]. 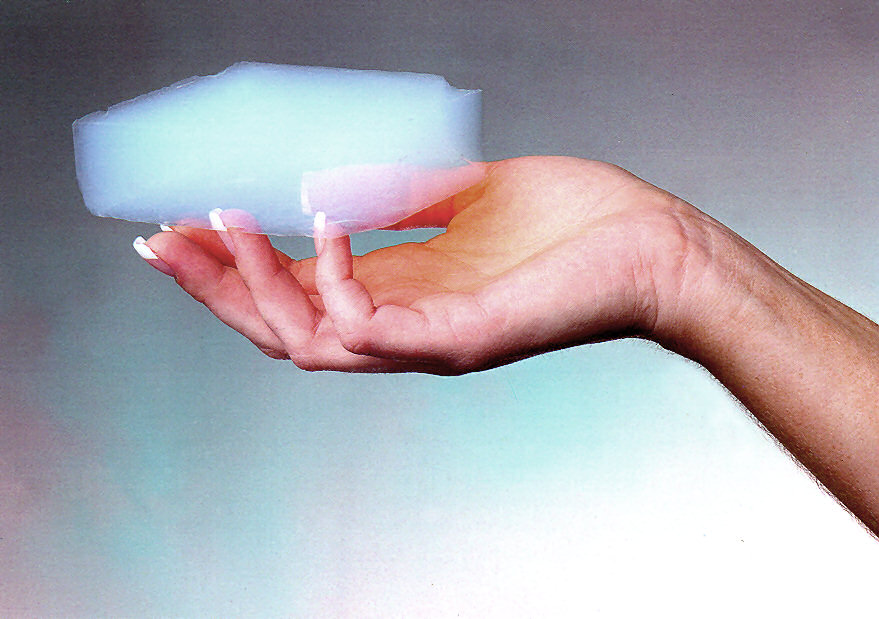 Aerogels resemble a sponge with numerous nano-fine pores. Not only does this structure refract the light and give the material a bluish shimmer, it also explains its large interior surface: the surface area of 1 gram of aerogel corresponds to that of a soccer field [8]. This material is ideal for absorbing oil or capture comet dust [9].

Aerosols are nearly weightless and, despite being the flyweight amongst high-tech materials, a real heavyweight. In order to get a visual impression of the structure of an aerogel: the spatial cross-links in the aerogel are 1000 times thinner than spider threads and the pores small enough to trap air molecules and prevent them from touching, making aerogels predestined for insulating materials. After all, heat is nothing but motion and friction: heat is transferred by molecules in the air bumping into each other and causing friction. The pores in aerogels are so small that this process is stopped. Due to the high level of cross-linking of the gel-forming particles aerogels are brittle and light, but nevertheless stable and able to bear loads.

The history of this record-breaking material starts approximately 80 years ago; the exact time has not been determined yet. According to legend, it all started with a bet between the scientists Samuel Stephens Kistler and Charles Leamed, both of them working at Stanford University, California, USA, at that time. The question arose whether it could be possible to remove the liquid from a gel without the gel losing its volume and starting to shrink.

A gel is usually defined as a finely dispersed system of at least one solid and one liquid phase. By cross-linking of the contained particles, the solid phase forms a sponge-like, three-dimensional web, whose pores are filled by a liquid (Lyogel) or gas (Xerogel). If the network is highly porous and the intermediary spaces contain air, the gel is called an aerogel [4].

In order to reach his goal, Kistler had to develop a method for drying gels without reducing the volume of the resulting structure. Not an easy task, but this much can be revealed: “Our efforts were successful”, writes Kistler in 1931 in the renowned scientific magazine Nature [1] about the results of his experiments, followed by a more extensive paper in the Journal of Physical Chemistry [2].

Kistler used sodium silicate, which he mixed with water and thus created a solution (water glass). After adding hydrochloric acid as precipitating agent, silicic acid particles were precipitated (precipitation reaction), which dispersed in the solution in an uncoordinated manner according to Brownian motion and also bumped into each other. […] Gradual adhesion led to particles aggregating over time and within approximately one day resulted in a gel with a web-like structure. Sodium chloride and excess hydrochloric acid were rinsed from the gel with water (aquagel), followed by adding alcohol (alcogel). This step is necessary, since water would destroy the gel structure during the following process. Slow evaporation of the alcohol leads to the formation of menisci due to surface forces. These ‘dig’ into the gel and create a tunnel-like structure, resulting in the shrinking of the gel and a porous structure with a pore content of only 50 percent. This exactly, however, was to be avoided. For the drying process Kistler therefore used an autoclave (a gas-tight sealable pressure container, editor’s note: this also includes pressure cookers) and raised temperature and pressure above the critical point, creating a supercritical fluid. This procedure is called supercritical evaporation. The phase boundary between gas and liquid was thereby lifted and surface forces, which otherwise would have led to the formation of menisci, no longer existed. The supercritical fluid was then discharged from the autoclave, drying the product and thus creating the aerogel. The aerogel retained the size and shape of the original gel. Kistler’s silicate aerogels had a density of 30-300 kg/m³ and a porosity between 86 and 98 percent. However, Kistler’s production method was lengthy and labor-intensive, especially the solvent exchange step before the alcohol evaporation [5].

In 1968, at the University of Lyon, Stanislaus Teichner developed and in 1986 improved the Sol-Gel-process, which became and for a long time remained the standard method for producing aerogels. In this method, toxic tetra-methyl-ortho-silicate (TMOS) is slowly hydrolyzed with a specific amount of water and an added catalyst into ortho-silicic acid and methanol. Water separates from the silicic acid, leading to the formation of silicon oxide (SiO2) tetrahedrons, cross-linking with each other to form a gel. The resulting alcogel is dried according to the Kistler method in the pressure cooker, during which the methanol reaches critical values of 239.4 °C und 80.9 bar. The characteristics of the developing aerogel, its structure and density, can be controlled by the choice of the catalyst, the pH value, and the proportions of the involved substances, especially methanol [5, 6].

Since then other methods for producing aerogels, all with different advantages and disadvantages, have been developed. The primary goal has been to make the aerogel production less costly, an aspect of enormous importance for the commercial success of any product. According to a report in the newspaper “Die Welt”, one cubic meter of aerogel cost approximately 1600 Euro in 2010; in comparison, the same amount of insulation wool could have been purchased for 50 Euro [7]. BASF in Ludwigshafen uses a method to produce predominantly aerogel granules of one to six millimeters in diameter and a density of approximately 200 kg/m³. Sulfuric acid and sodium silicate are reacted by spraying them onto a flask via a mixing nozzle. During the process, alkali salts are formed, which must be washed out in post-processing step. The advantage of this method is its relatively low cost; disadvantages are the inferior properties of the granules, especially the optical properties [5].

The functional capability of the aerogel, however, is not compromised. Nowadays, aerogel granules are used in various applications, predominantly as a superlative insulating material. “A sensational measured thermal conductivity value of merely 0.017 W/(m*K) finally allows us to reach required or desired insulation values even with extremely thin layers”, rejoices the company BASF Wall Systems in their MultiThermAERO flyer. Spatial and optical interference could thus be easily reduced to an absolute minimum. Insulating aerogels can be processed in various ways: as insulating boards, flexible fleece, or filling in textiles that keep the wearer comfortably warm even at extremely low temperatures. Not only do aerogels keep out the cold, due to their structure they also work wonders in fire protection: temperatures of hundreds of degrees may rage on one side of an aerogel-filled fleece while not being noticeable on the other side. Sound protection is considered a nice side effect of common insulation materials. For aerogels it is a standard: “Thanks to the fine-pored nano-structure and the immense surface, aerogels also function as highly effective sound absorbers and can reduce noise volumes significantly”, describes BASF Wall Systems GmbH & Co. KG [8].

Aerogels can offer numerous advantages for insulation and therefore have become rivals to the classic materials that currently still reign this segment of the market. However, aerogels have not yet been able to be foamed. Consequently, they fall behind and other products are preferred when it comes to filling hollows and gaps to prevent thermal bridges, for example when insulating refrigerators and freezers. These appliances consume approximately one fifth of the electrical energy in a household.

Leading the market in this field are currently polyurethane hard foams, which have significantly increased the insulating effects and reduced the energy consumption over the last few years. Despite their position on the market, the development of PU materials continues incessantly, possibly inspired by the capability of the aerogels. Samuel Stephens Kistler succeeded in producing aerogels before Otto Bayer invented polyurethane (PU).

Contrary to aerogels, however, it was soon possible to produce PU in economically interesting ways. By 1944 Otto Bayer and colleagues had applied for 260 PU patents [10]. Last year, Bayer Material Science presented a PU hard foam whose pore size of 70 to 100 micrometers still barely reaches the size of aerogel pores, but manages to be no thicker than a human hair and is therefore considerably smaller than the pores of conventional polyurethane foams. Thermal conductivity can thus be reduced by up to ten percent in comparison to standard materials, reports Bayer Material Science. Besides refrigerators, freezers, and water boilers the company has been scouting for new applications for this new PU hard foam.

The material will be used in the aeronautics project Solar Impulse – a flight around the world using only solar energy, planned for 2015. “In the second, further improved airplane model, the insulating material will be partially used for the cockpit paneling, which will be designed by Bayer Material Science”, the company reports [11]. Due to its extraordinary properties, PU has been an Aero-material for a long time and has been used in the aviation industry in numerous ways. If you want to know more about the material polyurethane (PU): PU will be discussed in one of our next Topics of the Month. GDeußing