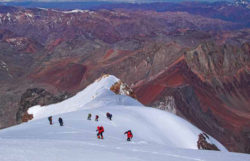 A team of scientists from Chile, Spain and Germany have found polychlorinated biphenyls (PCBs) in the snow of the high Andes Mountains at elevations above 6000 meters. While the GC/MS analysis involved is straight forward, new paths had to be trodden to improve the sample preparation and reduce the amount of sample that needed to be carried to the laboratory. The scientists found an ultra-sensitive solution: Stir Bar Sorptive Extraction (SBSE).

Snow is a fascinating material - and not just in the eyes of children of all ages racing down snowy slopes on a sunny winters day. Even scientists preoccupied with the whereabouts of persistent organic pollutants (POPs) in the environment can apparently develop a weakness for snow. Chilean, Spanish, and German scientists, among them experts from the Helmholtz Center for Environmental Research (UFZ) in Leipzig, Germany, went on an expedition to South America. Their goal was the eternal snow cap of the Cerro Aconcagua, at 6962 meters the highest mountain in the Americas. In the elevated snow repository, the scientists hoped to find deeper answers to the whereabouts and long range atmospheric transport of polychlorinated biphenyls (PCBs) in the southern hemisphere. 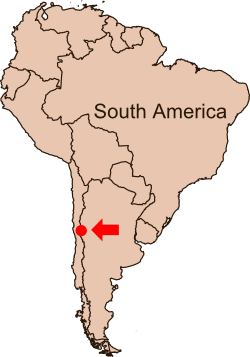 Scientists, among them experts from the Helmholtz Center for Environmental Research (UFZ) in Leipzig, Germany, went on an expedition to South America. Their goal was the eternal snow cap of the Cerro Aconcagua, at 6962 meters the highest mountain in the Americas. Source: GERSTEL

PCBs along with several pesticides, industrial chemicals and incineration products belong to the «dirty dozen» of organic chemicals that are also known as persistent organic pollutants (POPs). The Stockholm Convention on Persistent Organic Pollutants is an international environmental treaty that aims to eliminate or restrict the production and use of POPs. The treaty was signed in May 2001, outlawing nine of the «dirty dozen» chemicals, limiting the use of DDT to malaria control, and curtailing inadvertent production of dioxins and furans. Until the 1980‘s, PCBs were widely used as insulating oil and refrigerant in transformers and capacitors, as hydraulic fluids, and as plasticizers. According to the US EPA, PCBs have been demonstrated to cause adverse health effects in animals such as cancer and a number of serious non-cancer health effects, including effects on the immune system, reproductive system, nervous system, endocrine system and other health effects. Studies in humans provide supportive evidence for potential carcinogenic and non-carcinogenic effects.

PCBs accumulate in fat tissue and reach the human body through the food chain. To determine the degree to which PCBs are present in the environment, samples must be taken and chemical analysis performed. This is the only way to gauge whether international treaties are being adhered to. But why head for the glaciers in the high Andes with your back pack? Scientists agree: Due to their high porosity and resulting high specific surface, ice crystals are more efficient than rain drops at extracting pollutants from the atmosphere. The only condition that must be met is that temperatures permanently stay below the freezing point of water to conserve the fallen snow until it is sampled, and temperatures below 0 °C is a given at 6000 meters above sea level. The idea behind the project of the scientists was to analyze the icy precipitate in order to gain insights as to the type, accumulation, and transport paths of POPs in the atmosphere.

POPs like PCBs and organochlorine pesticides are mainly deposited and accumulated in colder regions of the world according to an article by Quiroz et al. in Environmental Chemistry Letters (2009, 7: 283-288). Studies of PCB concentrations in snow from the arctic region and from the highest elevations in Europe and Canada have further shown that pollutants are distributed globally through Long Range Atmospheric Transport (LRAT). In the Andes Mountains, PCBs have been found in snow as well as in various solid, liquid, and gaseous matrices. 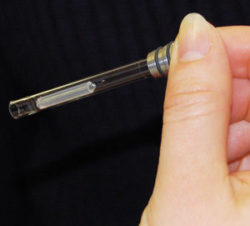 The GERSTEL Twister is small and easy to handle: For sensitive determination of PCBs in water, only a 40 mL sample is needed. An important fact, especially when samples have to be carried in your personal back pack at 6000 meter elevation, where every gram counts.

In the snow of the high Andes, Roberto Quiroz and his colleagues discovered mainly the most stabile PCBs such as hexachlorobiphenyl (PCB 138) and heptachlorobiphenyl (PCB 180). Swiss scientists have previously found comparable pollution patterns in Swiss alpine glacier lakes and have pointed out the possible danger to drinking water supplies. Apparently, major mountain ranges like the Andes form a natural barrier for those POPs that are distributed globally through the atmosphere. The Spanish-, German-, Chilean team of scientists arrived at the conclusion that the effect of high mountain ranges on air-borne distribution of pollutants has been underestimated. The scientists recommend that this effect, and the processes involved, be investigated further. Since high mountain regions can be inaccessible, or at least difficult to reach, environmental testing can be an enormous challenge or even a life-threatening adventure. Adding to the misery, pollutant concentrations are often very low. This, according to Quiroz et al., means that in order to reach the required lower limits of determination large sample volumes have to be lugged over long distances under adverse conditions from alpine glaciers at very high altitudes to the laboratory. The international team of scientists therefore started out by investigating how the analysis could be performed satisfactorily based on smaller, more easily transportable sample amounts.

It‘s all about the extraction technique

The solution to the high-altitude conundrum was found to be Stir Bar Sorptive Extraction (SBSE) using the GERSTEL Twister. The Twister is a patented magnetic stir bar covered with a thick layer of polydimethylsiloxane (PDMS), a highly efficient sorbent and extraction phase. While the Twister stirs the aqueous sample, organic chemical compounds are efficiently extracted and absorbed into the PDMS. Using thermal desorption, analytes are subsequently transferred quantitatively to a GC/MS system resulting in ultrahigh sensitivity and lowest possible limits of determination. Depending on the analytes in question and the sample volume extracted, SBSE can be up to 1000 times more sensitive than SPME. SBSE is extremely simple to perform. The Twister is added to the sample and allowed to stir for 1-2 hours. The Twister is then removed, dried using lint-free paper cloth, and placed in the autosampler tray. Thermal desorption is performed using a GERSTEL Thermal Desorption System (TDS) or Thermal Desorption Unit (TDU) in combination with a MultiPurpose Sampler (MPS). Either system can be connected with a GC/MS system that is used to separate and determine the individual compounds. The UFZ was responsible for analyzing the snow samples: „While we needed at least one liter of snow to perform one analysis using conventional solvent-based extraction techniques, the solvent-free SBSE technique gave us the correct answer based on only a 40 milliliter sample“, Dr. Peter Popp said. This was an invaluable difference: „During expeditions at high altitudes, every gram counts. We could never have transported that many liters of snow. That is why we were delighted that just 40 milliliters of sample was sufficient“, Roberto Quiroz from IIQAB, Barcelona
added.

Sampling in dizzying heights, analysis in the laboratory

Quiroz took part in a 2003 rope party that took snow samples at 3500, 4300, 5000, 5800 and 6200 meters altitude on the eastern slopes of the Aconcagua. Samples were taken in 100 mL brown glass bottles and stored at -20 °C until analyzed. In the laboratory, samples were melted at room temperature. A 40 mL sample of snow melt water was transferred to a 100 mL Erlenmeyer flask along with 10 mL of MeOH. The mixture was stirred for four hours using a Twister, whereby the PCBs in the sample were concentrated in the PDMS phase of the Twister. The Twister was then removed from the flask, dried, and placed in an empty thermal desorption glass tube.

Chromatogram resulting from a snow sample taken at 6200 Meter elevation: Finding PCBs on the highest point of the Andes is proof of long-range atmospheric transport (LRAT) and accumulation of persistent organic pollutants (POPs) in the Southern hemisphere. Photo montage: GERSTEL

Thermal desorption of the Twister was performed using a Thermal Desorption System (TDS) equipped with a TDS A autosampler. If larger numbers of samples need to be analyzed, the GERSTEL Thermal Desorption Unit (TDU) in combination with the MultiPurpose Sampler (MPS) analyzes up to 196 Twisters in one batch. Twisters were thermally desorbed at 250 °C for 10 minutes. Helium carrier gas flow at 100 mL/min was used to transfer analytes to the Cooled Injection System (CIS), where they were cryofocused at -20 °C. The CIS was then heated to 250 °C at a rate of 12 °C/s. Analytes were transferred to the GC column in splitless mode, the split was reopened at 2.0 min. The separation was performed on an Agilent HP-5MS column (30 m, 0.25 mm ID, 0.25 μm film thickness) using the following temperature program: Starting temperature: 70 °C; 2 min hold; 15 °C/min to 180 °C; 10 min hold; 5 °C/min to 280 °C; 10 min hold. A GC/MS system from Agilent Technologies was used (GC 6980/MSD 5973). Analytes were detected in SIM mode using two characteristic ions.

Dr. Popp and the UFZ team analyzed the snow samples to determine a total of 25 PCBs. The SBSE-TDS-GC/MS method enabled recoveries between 85 and 93 percent on average. The limit of detection was 0.02 ng/L. In the Aconcaqua snow samples, the scientists mainly found the most persistent congeners PCB 138 and PCB 180, albeit in concentrations below 0.5 ng/L. This is a relatively low concentration compared with samples from other mountainous and cold regions in the world, leading Quiroz and his fellow scientists to conclude that the Southern Hemisphere is less polluted than the Northern Hemisphere. The presence of PCBs does prove, however, that these compounds are transported to and deposited in the Andes.

The results of this research could gain additional relevance given the background of global climate change. „If the glaciers were to melt or partially melt, the deposited chemical pollutants would be washed down-stream and could contaminate the local drinking water“, says Roberto Quiroz. And it is not only in South America that glaciers play an important role as a source of drinking water and water for irrigation.