"After a rigorous selection process, we chose Bob Patel based on his proven leadership, his outstanding track record, and his numerous contributions to the success of LyondellBasell", said Supervisory Board Chairman Robert G. Gwin. "The Board is grateful to Jim Gallogly for his many accomplishments and his outstanding service to the company and its stakeholders. We are very pleased to announce Bob´s appointment as Jim´s successor and we have full confidence that he will continue to lead the Company to new heights", Gwin said.

Patel has served as executive vice president, Olefins and Polyolefins (O&P) - Europe, Asia & International and Technology since October 2013. After serving in several positions of increasing responsibility at Chevron Corporation and Chevron Phillips Chemical Company, Patel joined LyondellBasell in March 2010 as senior vice president, O&P - Americas, where he successfully restructured the business to take advantage of the shale gas expansion in the U.S. In November 2010, he was named senior vice president, O&P - EAI and Technology. In that role, he again successfully restructured the business and improved profitability.

In recognition of his contributions, Patel was promoted to executive vice president in October 2013 and given additional responsibility for the Company´s manufacturing operations outside of the Americas. As executive vice president, Patel has been responsible for the Company´s outperformance of its peers in Europe and Asia by streamlining operations, shifting to advantaged feedstocks and operating plants more reliably.

"I am honored by the Supervisory Board´s confidence and thankful for Jim´s leadership", said Patel. "Moving forward, we will build upon the strong foundation Jim has established. I truly believe our greatest achievements are yet to come and I look forward to the next exciting chapter in LyondellBasell´s future", he concluded. 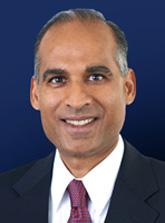