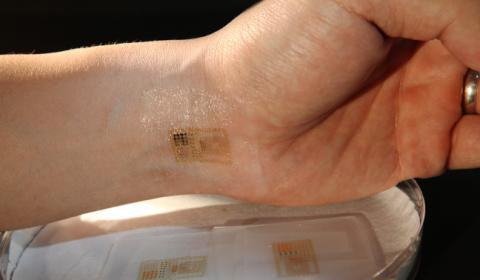 Plastics technology and electrical engineering have never been two different worlds. There has, however, been a classic allocation of roles between them, with the result that plastics have up to now focussed on their insulation properties, because electricity has always been an obstacle where plastics are concerned. This has changed since conductive polymers have been available: the two different fields, which used to concentrate on different areas, are now opening up new functions for each other and are establishing a research field known as plastic electronics, organic electronics or polytronics.

Polydimethylsiloxane (PDMS), a long-chain organic compound from the silicone family – colourless, transparent, non-toxic and chemically inert – is one of the prominent representatives of the new generation of plastics. PDMS acts as a substrate material for microelectronic components, e.g. sensors or processors, that are either made of plastic themselves or – in most cases – are produced conventionally from metal. The hybrid version is spectacular in itself; it is paving the way for promising innovations in medical applications in particular – wherever ultralight, mechanically flexible solutions are required. An excellent example of this is what is known as the Electronic Epidermal System (EES), which has been developed by an international team of material research scientists and engineers headed by John A. Rogers and Dae-Hyeong Kim from the University of Illinois in Urbana/USA. EES involves an electronic plaster that is applied to the skin to carry out medical diagnostics and to monitor organ functions (health monitoring), i.e. to measure pulse frequency, brainwaves and blood pressure as well as to record and transmit data.

The plaster consists of three layers: a layer of metal is laminated between two layers of PDMS film. The metal layer incorporates – for example – the highly sensitive sensors, a transmitter and solar cells as an energy source (instead of a battery). These electronic components are extremely small and are spirally wound like wire mesh so that adapt flexibly to every movement of the body without damage – like the plastic jacketing. “Conventional electronics consist essentially of a silicone chip, which is normally very fragile and does not even fit on this soft, elastic surface. The thinner the silicone chip, however, the better it can be bent”, says John A. Rogers. The electronic plaster is only about half as thick as a human hair and is exceptionally light at less than 100 milligrams. It is transparent, permeable to air and sticks to the skin without any adhesive being needed. The film is merely wettened with some water and adheres thanks to what is known as van der Waals interaction, with the help of which such creatures as geckos are famous for being able to walk along walls and ceilings without falling off. Although the plaster is rugged and easy on the skin, it still has to be replaced roughly every two weeks, because the cells of the epidermis are being sloughed off all the time and this can weaken the bond. The electronics cannot be used again once they have been removed; there is further scope for optimisation of the system here.

The research scientists initially tested the EES successfully on the chest (measurement of electrical activity of the heart) and forehead (brainwaves). The readings were exactly the same as those obtained via conventional measurement technology for the purposes of comparison. The advantage EES has over existing systems is its wider range of potential everyday uses, particularly in long-term applications (e.g. ECG), because data are transmitted wirelessly – that at least is the plan. The scientists from Illinois started off by using ultrathin wires that led from the electronic sticking plaster to a data recorder. Wireless transmission works too, if the circuits for the radio connection are integrated in the skin measurement system. Scientists from Uppsala in Sweden have already reported success in doing this: they have developed an electronic plaster that transmits the readings via radio (Bluetooth).

The polytronic plaster was originally developed for robotics, where the sensors transmit signals to, for example, gripper arms. EES is therefore likely to be useful for people with artificial limbs too. EES has more potential than just this, however. Located on the lower arm, the leg or the neck, the invention registers minute muscle contractions. The vision linked to this is to give paraplegics or patients with neurological disorders greater mobility or to facilitate communication. Success has already been achieved with a sensor plaster attached to the throat that converts muscle signals into direction commands for computer games. Computers could also translate such mini-impulses into a rudimentary language. This would make EES the interface between people and machines. The research scientists are of the opinion that this new era has already begun. John A. Rogers thinks that polytronics are blurring the distinction between electronics and biology to an increasing extent. GD