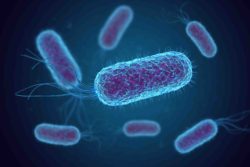 Nylon manufacture could be revolutionised by the discovery that bacteria can make a key chemical involved in the process, without emitting harmful greenhouse gases. Scientists have developed a sustainable method of making one of the most valuable industrial chemicals in the world - known as adipic acid - which is a key component of the material.

More than two million tonnes of the versatile fabric - used to make clothing, furniture and parachutes - is produced globally each year, with a market value of around 5,5 billion Euro.

Scientists from the University of Edinburgh altered the genetic code of the common bacteria E.coli in the lab. The modified cells were grown in liquid solutions containing a naturally occurring chemical, called guaiacol, which is the main component of a compound that gives plants their shape.

The environmentally friendly approach could be scaled up to make adipic acid on an industrial scale, researchers say.

The study is published in ACS Synthetic Biology. It was funded by the Carnegie Trust and UK Research and Innovation.

Lead author Jack Suitor, a PhD student in the University of Edinburgh's School of Biological Sciences, said the team is continually exploring new ways of using bacteria to produce chemicals.

He said: "I am really excited by these results. It is the first time adipic acid has been made directly from guaiacol, which is one of the largest untapped renewable resources on the planet. This could entirely change how nylon is made."

He said: "If bacteria can be programmed to help make nylon from plant waste - something that cannot be achieved using traditional chemical methods - we must ask ourselves what else they could do, and where the limits lie. We are all familiar with the use of microbes to ferment food and beer - now we can ferment materials and medicines. The possibilities of this approach to create a sustainable future are staggering."