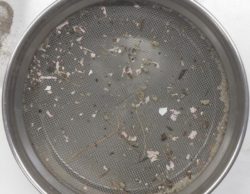 Large microplastics (1-5 mm), mineral particles and plant remains from a floodplain soil of the river Maggia in the Canton of Ticino (Italian speaking part of Switzerland). Source: Institute of Geography, University of Bern

It is one of the first research projects into the existence of microplastics in the soil: Scientists at the University of Bern investigated floodplain soils in Swiss nature reserves for microplastics – and made a find. They estimate, that there are around 53 tonnes of microplastics lying in the top five centimetres of the floodplain. Even many of the soils in remote, protected mountainous areas, are contaminated with microplastics.

The images of oceans and inland lakes polluted with microplastics are not new. In contrast, it is almost unknown that even soils are contaminated with microplastics. The problem: Until now, there were no methods to measure and quantify the smallest plastic particles in a soil. The researchers of the Geographical Institute of the University of Bern therefore developed a new method, and for the first time, 29 floodplain soils were investigated all over Switzerland, from Geneva to Grisons.

Also small balloons eventually turn into microplastics: remains of a balloon in a floodplain soil in the Vallée de Joux in the Canton of Vaud. Source: Institute of Geography, University of Bern

"Although the sites are located in nature reserves, microplastics were found in 90% of the soils", says Moritz Bigalke, one of the co-authors of the study by the Geographical Institute of the University of Bern. Even in many remote mountainous areas, evidence of microplastics particles could be found – an indication that microplastics are transported by the wind. The researchers estimate the quantity of microplastics in the top 5cm of the Swiss floodplain soil at 53 tonnes. These results were recently published in the journal
Environmental Science and Technology.

"These findings are alarming," explains co-author Michael Scheurer, "because new studies indicate that microplastics in the soil can be harmful to and even kill earthworms in the soil for example." As a consequence, this might compromise the soil fertility, because earthworms perform important duties in the soil.

However, the exact effects on plants and soil fertility, and how exactly transport into the human food chain occurs via crop plants, has not been researched. It has been estimated, that the application of sewage sludge to arable land alone, could add an annual MP load to soil greater than that entering the world’s oceans.

So, there is a great need for research in this still new field, as many questions are unanswered. Especially as it is to be assumed, that the microplastics concentrations measured by the researchers in the floodplains, are significantly lower than in other – for example agricultural – soils. Moritz Bigalke says: "So, there is a need for research into the question, of how microplastics affect food production, and whether it can get into the food chain."