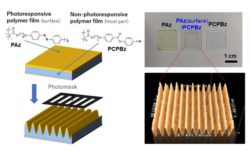 Scientists show that only a thin, topmost layer of the light-dependent azobenzene-containing plastic film needs to be light-sensitive, rather than the entire film, opening up new ways to potentially reduce production costs and revolutionize its use.

Azobenzene-containing plastic film is a peculiar material; its surface can change shape when exposed to light, making it a valuable component in modern technologies/devices like TV screens and solar cells. Scientists now show that only a thin, topmost layer of the light-dependent azobenzene-containing plastic film needs to be light-sensitive, rather than the entire film, opening up new ways to potentially reduce production costs and revolutionize its use.

So far, it had been widely accepted that the light-sensitive nature of this material extends throughout the whole film, but scientists did not understand what was causing the shape-shifting movement. A group of scientists led by Dr Takahiro Seki of Nagoya University, Japan, set out to figure out exactly how this happens; they have published their findings in the journal Scientific Reports.

They cite a well-studied phenomenon called Marangoni flow as their inspiration: owing to this phenomenon, differences in "surface tension" (the property by which the particles in the outermost layer of liquids are always attracted inwards, creating a boundary for the liquid) cause many soft, plastic films to move in a peculiar pattern. The most famous example of this phenomenon is the formation of "wine legs" or droplets of liquid evaporating and streaking down the surfaces of wine glasses.

They decided to test whether ultraviolet light triggered changes in the surface tension of azobenzene plastic film, and whether those changes resulted in the film moving. They chose to first cover azobenzene film with a very thin top layer that was light-sensitive, then exposed this film to UV radiation. Next, they did the same with film that was covered in a top layer unresponsive to light. To their excitement, the scientists found surface structural changes in the film with a light-sensitive top layer, but not in the film with a "light-insensitive" top layer. "This is the first time anyone has demonstrated that only the light responsiveness of a very thin 'nanometer' level layer is needed for azobenzene-containing film to alter its surface morphology under UV," said Dr Seki.

An important observation of this study is that the movement of the material isn't dependent on "light polarization," or the direction in which light waves travel. If it were, that would suggest that there is another force on the molecular level affecting the whole film. Instead, Dr Seki concludes that it is probably the changes in chemical structure at the surface induced by the UV radiation that changes surface tension, inducing movement to the top of the film.

Describing the wider ramifications of their results, Dr Seki states: "We are only at the cusp of developing this discovery onto an industrial scale, but you can imagine how needing only a very small amount of light-sensitive material can reduce costs. Many optical devices like photocopiers, printers, and monitors depend on the light-based surface change in azobenzene polymer film. Based on our findings, azobenzene film can also act as an "actuator" (that part in a device that moves other parts) in nanomachinery."

These newly discovered properties have vast implications, from improving the economics of production and lowering material prices, to advancing the field of nanotechnology itself.