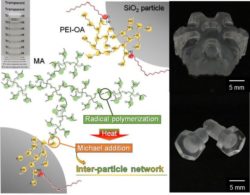 The fabrication of complex ceramic or glass structures via stereolithography, a type of 3D printing, has long been held back by how much time it takes at the back-end of the process, which can take up to two days. A new technique reduces this time down to less than 5 hours.

Stereolithography prints objects from CAD files out of a powder suspended in a liquid. Objects are built layer by layer out of this liquid by shining a light, or laser, into the liquid-and-powder suspension, also called a "colloid." (Milk, for example, is also a colloid, but of milk fats suspended in water)

The laser causes some of the particles that are sensitive to light to join up together, or "cross-link," and form layers made of particles embedded in polymers (long chains of molecules) - a hardening process called "curing." The laser in effect "writes" layers in the liquid suspension, and these layers, printed out on top of one another, form a 3D object composed of the binding agent and the powder.

Ceramic or glass stereolithography holds the potential to fabricate parts with much more accurate and complex geometries--including hollow objects or ones with intricate internal structures that can reduce weight while maintaining strength--than could ever be achieved by conventional manufacturing with these substances. Such complexity of ceramic and glass design offers a raft of new biomedical, structural, and energy system applications.

The cured object, termed 'green' once it has been printed, still has a couple of additional stages to go though at high temperature: debinding--or removal of its binding agents - and sintering - the fusing of the powder particles firmly together. After debinding, the object is termed 'brown', and the finished product can be obtained after sintering.

However, in order to avoid structural collapse during this process--as a result of the production of gas bubbles that could shatter the strong but brittle ceramic or glass--debinding and sintering are performed extremely slowly, typically taking up to 48 hours.

"Until now, this time-consuming and costly constraint has limited 3D printed glass and ceramic parts to highly specialized applications," said Motoyuki Iijima, an engineering researcher at Yokohama National University, whose team has developed a new colloid recipe that sharply reduces the time needed for debinding and sintering.

"What you want instead is to get closer to the speed of conventional glass or ceramic production but combined with the complexity offered by 3D printing and similar additive manufacturing processes."

The research team published their findings in the journal Communications Materials on May 20.

To prove their recipe concept, the researchers wanted to manufacture transparent glass. This particular colloid recipe takes silica (SiO2) particles that have been modified with polyethyleneimine (a type of polymer) and oleic acid, a type of fatty acid that occurs in many animal and vegetable fats or oils. These particles are then mixed in an alcohol-based solvent along with a photo-initiator - the recipe ingredient that is sensitive to light and initiates the curing.

Crucially, the recipe also allows for a much smaller amount of monomers - the particles that perform the cross-linking - than is normal in glass and ceramic stereolithography, and encourages more cross-linking by other particles.

Normally, the large amount of monomers is what requires the slow debinding and sintering process because a rapid burning of monomers would generate the gas that threatens the structure of the object.

By being able to use only tiny amounts of monomers in the colloid, the researchers managed to get the debinding and sintering time down to less than 5 hours.

Having demonstrated how much faster this process can be performed for transparent glass, the researchers now want to extend the liquid suspension recipe, with its short processing time, to any kind of ceramic or glass.