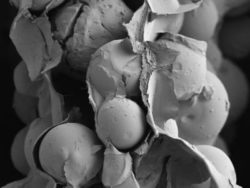 Tiny fibrils extracted from plants have been getting a lot of attention for their strength. These nanomaterials have shown great promise in outperforming plastics, and even replacing them. A team led by Aalto University has now shown another remarkable property of nanocelluloses: their strong binding properties to form new materials with any particle.

Cohesion, the ability to keep things together, from the scale of nanoparticles to building sites is inherent to these nanofibrils, which can act as mortar to a nearly infinite type of particles as described in the study. The ability of nanocelluloses to bring together particles into cohesive materials is at the root of the study that links decades of research into nanoscience towards manufacturing.


The research reveals the universality of cohesion led by nanocelluloses

In a paper just published in Science Advances, the authors demonstrate how nanocellulose can organize itself in a multitude of different ways by assembling around particles to form highly robust materials. As pointed out by the main author, Dr Bruno Mattos, 'This means that nanocelluloses induce high cohesion in particulate materials in a constant and controlled manner for all particles types. Because of such strong binding properties, such materials can now be built with predictable properties and therefore easily engineered'.

The moment anytime a material is created from particles, one has to first come up with a way to generate cohesion, which has been very particle dependent, 'Using nanocellulose, we can overcome any particle dependency', Mattos adds.

The universal potential of using nanocellulose as a binding component rises from their ability to form networks at the nanoscale, that adapt according to the given particles. Nanocelluloses bind micrometric particles, forming sheet-like structures, much like the paper-mâché as done in schools. Nanocellulose can also form tiny fishnets to entrap smaller particles, such as nanoparticles. Using nanocellulose, materials built from particles can be formed into any shape using an extremely easy and spontaneous process that only needs water. Importantly, the study describes how these nanofibers form network following precise scaling laws that facilitates their implementation. 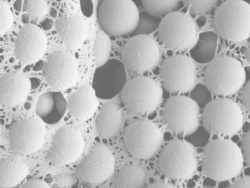 This development is especially timely in the era of the nanotechnologies, where combining nanoparticles in larger structures is essential. As Dr Blaise Tardy points out, 'New property limits and new functionalities are regularly showcased at the nanoscale, but implementation in the real world is rare. Unraveling the physics associated with the scaling of the cohesion of nanofibers is therefore a very exciting first step towards connecting laboratory findings with current manufacturing practices'. For any success, strong binding among the particles is needed, an opportunity herein offered by nanocellulose.

The team has shown a pathway to achieve scalability in the production of materials, from particles as small as 20 nm in diameter to those that are 20,000 larger. Furthermore, inert particles such as metallic nanoparticles to living entities such as baker's yeast can be compounded. They can be of different shape, from 1D to 3D, hydrophilic or hydrophobic. They can comprise living microorganisms, functional metallic particles, or pollen, achieving new combinations and functionalities.

According to the team leader, Prof. Orlando Rojas, 'This is a powerful and generic method, a new alternative that bridges colloidal science, material development and manufacturing'.