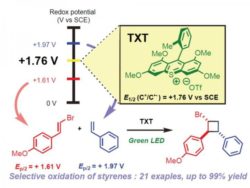 A team of researchers from Japan has demonstrated a light-based reaction that yields high numbers of the base chemical component required to produce bioactive compounds used in common industry products. They published their results on June 11 in Organic Letters.

"We developed a redox potential-controlled and cost-effective method to synthesize multisubstituted cyclobutanes, which are present in the core structure of various products and bioactive components," said paper author Yujiro Hoshino, a research associate at Yokohama National University.

Cycloaddition reactions allow to prepare carbocyclic and heterocyclic organic compounds with atom-efficiency. For a long time, researchers carried out photocycloadditions of olefins such as styrenes, a chemical used in the production of plastics and rubber, by treating them with high-energy ultraviolet light or transition metal catalysts, which are known to be toxic and expensive chemical reagents. The reaction mainly provides homo-dimer, not hetero-dimer. In addition, the powerful light damages the bonds holding the chemical together, allowing it to break apart and reform in a new configuration, known as a cyclobutene ring.

Redox potential refers to how easily a chemical loses or gains electrons. Hoshino and co-workers take advantage of this characteristic and applied a green, visible light to styrenes situated in a two-by-two arrangement, allowing the chemical components and bonds to selectively reorganize as the light freed electrons from the styrenes. The newly organized chemical components were multisubstituted cyclobutanes.

"By focusing on the different redox potential between various styrenes and optimizing our light catalysts, we developed a mild and clean method to synthesize multisubstituted cyclobutanes," Kenta Tanaka, paper first author and an assistant professor at Tokyo University of Science, said.

"Emphasis will be placed on the strategy which shows the potential to synthesize multisubstituted cyclobutanes via radical cation species without any transition metal catalysts," said another corresponding author Kiyoshi Honda, a professor at Yokohama National University.

Next, the researchers plan to expand the use of various visible-light catalysis methods.

"We hope our reaction system provides an efficient and new method for green-light-driven organic chemical reactions, and that we continue to contribute to the field," Hoshino said.