The near-infrared light is a light source with the shortest wavelength, indicated outside of the red color in the light spectrum. The near-infrared light has been widely used in optical communications, medical lasers, LiDAR of self-driving vehicles, and security and surveillance instruments, ranging from private to defense industry. To utilize this near-infrared light, the technology that converts light into an electrical energy through a photodetector is crucial. The research team from POSTECH successfully developed a photodiode with increased absorption of the near-infrared light by using the hourglass principle.

The research team was led by Professor Chang-Ki Baek and consisted of a research professor, Kihyun Kim, Myunghae Seo of Creative IT Engineering and Sol Yoon of Electronic and Electrical Engineering. The team developed hourglass-shaped silicon nanowires to enhance photoresponse while using the conventional semiconductor process. Their establishment was published in the world's most renowned respected journal of electronics engineering, Nature Electronics on November 5.

Before their finding, the near-infrared photodiodes were made of chemical materials. For this reason, it required a separate cooling device due to the noise and high production cost when making into a large area. It was also very difficult to integrate. To overcome these difficulties of chemical materials, the team used silicon instead. Furthermore, they suggested to use hourglass-shaped silicon nanowires to increase silicon's absorptance of the near-infrared light.

The research team proved that the hourglass-shaped nanowires illustrated 29% increased near-infrared photoreseponse at wavelength of 1,000nm in comparison to the existing silicon photodiode with flat-panel. In addition, this newly developed photodiode was applied to a mobile heart-rate measurement system for demonstration. By doing this, they verified and confirmed of its commercialization when it demonstrated larger wave of heart rate and less than 1% of error rate than the existing photodiodes.

Professor Chang-Ki Baek who led this research said in his comment, "this study used the existing silicon that can be produced in mass at low cost and 100% compatible to the semiconductor production. It is very meaningful in that we were able to demonstrate increased photoresponsivity of the near-infrared light at the wavelength where the existing silicon cannot detect. It is possible that the developed device can optimize the absorption of the near infrared wavelength desired according to the structure of nanowires. It is expected to provide optical solutions to various fields such as LiDAR of a vehicle, medical laser, military night vision goggles, image sensors and more. 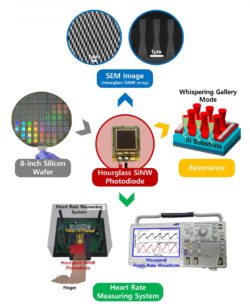