From dark to light in a flash: Smart film lets windows switch autonomously 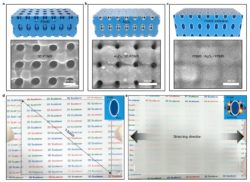 Design concept of and fabrication procedures for the 3D scatterer. Image: KAIST

Researchers have developed a new easy-to-use smart optical film technology that allows smart window devices to autonomously switch between transparent and opaque states in response to the surrounding light conditions.

The proposed 3D hybrid nanocomposite film with a highly periodic network structure has empirically demonstrated its high speed and performance, enabling the smart window to quantify and self-regulate its high-contrast optical transmittance. As a proof of concept, a mobile-app-enabled smart window device for Internet of Things (IoT) applications has been realized using the proposed smart optical film with successful expansion to the 3-by-3-inch scale. This energy-efficient and cost-effective technology holds great promise for future use in various applications that require active optical transmission modulation.

Flexible optical transmission modulation technologies for smart applications including privacy-protection windows, zero-energy buildings, and beam projection screens have been in the spotlight in recent years. Conventional technologies that used external stimuli such as electricity, heat, or light to modulate optical transmission had only limited applications due to their slow response speeds, unnecessary color switching, and low durability, stability, and safety.

Mechanical and optical simulations of the 3D scatterer. Image: KAIST

Inspired by these limitations, a KAIST research team led by Professor Seokwoo Jeon from the Department of Materials Science and Engineering and Professor Jung-Wuk Hong of the Civil and Environmental Engineering Department used proximity-field nanopatterning (PnP) technology that effectively produces highly periodic 3D hybrid nanostructures, and an atomic layer deposition (ALD) technique that allows the precise control of oxide deposition and the high-quality fabrication of semiconductor devices.

The team then successfully produced a large-scale smart optical film with a size of 3 by 3 inches in which ultrathin alumina nanoshells are inserted between the elastomers in a periodic 3D nanonetwork.

This "mechano-responsive" 3D hybrid nanocomposite film with a highly periodic network structure is the largest smart optical transmission modulation film that exists. The film has been shown to have state-of-the-art optical transmission modulation of up to 74% at visible wavelengths from 90% initial transmission to 16% in the scattering state under strain. Its durability and stability were proved by more than 10,000 tests of harsh mechanical deformation including stretching, releasing, bending, and being placed under high temperatures of up to 70°C. When this film was used, the transmittance of the smart window device was adjusted promptly and automatically within one second in response to the surrounding light conditions. Through these experiments, the underlying physics of optical scattering phenomena occurring in the heterogeneous interfaces were identified. Their findings were reported in the online edition of Advanced Science on April 26. KAIST Professor Jong-Hwa Shin's group and Professor Young-Seok Shim at Silla University also collaborated on this project.

Donghwi Cho, a PhD candidate in materials science and engineering at KAIST and co-lead author of the study, said, "Our smart optical film technology can better control high-contrast optical transmittance by relatively simple operating principles and with low energy consumption and costs."

"When this technology is applied by simply attaching the film to a conventional smart window glass surface without replacing the existing window system, fast switching and uniform tinting are possible while also securing durability, stability, and safety. In addition, its wide range of applications for stretchable or rollable devices such as wall-type displays for a beam projection screen will also fulfill aesthetic needs," he added.

The Korea Advanced Institute of Science and Technology (KAIST)