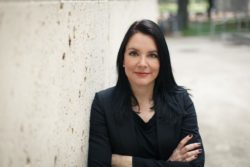 Eva Harth, director of the Welch-UH Center for Excellence in Polymer Chemistry at the University of Houston, said the new method addresses a long-standing need for industrial plastics producers, without requiring a new catalyst or expensive additives. Image: University of Houston

Plastics are a victim of their own success, so inexpensive, easy to use and versatile that the world is awash in plastic waste. Now researchers from the University of Houston have reported a new method of producing polyolefins - made from hydrocarbons and the most common building block of plastics - structured to address one of the biggest stumbling blocks to plastics recycling. The process also would allow plastics to be produced from food oils and other natural substances.

Eva Harth, director of the Welch-UH Center for Excellence in Polymer Chemistry, said the process addresses a long-standing need for industrial plastics producers, without requiring a new catalyst or expensive additives. "It's a very simple process," she said.

Harth is a corresponding author for a paper describing the discovery, published in the German journal Angewandte Chemie. Co-authors include co-corresponding author Glen R. Jones, a post-doctoral researcher with the Welch-UH Center, and first author Hatice E. Basburg Alhan, a graduate student at UH.

Polyolefins, and derivative products such as polyethylene and polypropylene, are used for everything from grocery bags to industrial pipes. The qualities of the plastics - rigidity vs. flexibility, for example - are determined in part by a chemical process known as branching: Jones said highly branched polyolefins are used in products that require softness or flexibility, such as grocery bags, while low branching is used to produce rigid plastics.

Traditionally, different catalysts have been required to spark differing levels of branching, Harth said, meaning that only one type of plastic could be produced at a time. "You have to be specific about what material you are after, what type of branching you need," she said.

Polymerization of internal alkenes proceeds via chain‐walking to give polymers with much higher branching than 1‐alkene analogues. Source: Angewandte Chemie

The new method allows branching to be modulated using a palladium catalyst with varying amounts of added aluminum chloride, which functioned as a Lewis acid; the aluminum chloride - an abundant and inexpensive substance - can be added at different points in the process, allowing the resulting polyolefin to contain differing branching properties.

The new process could address two growing issues faced by plastics producers - how to dispose of plastic waste in an environmentally friendly way, and how to reduce the use of oil and natural gas by instead using food oils and other natural substances.

Current polymers used in everyday materials - grocery bags, milk jugs, toys and medical equipment, for example - won't readily mix when they are melted down for chemical recycling. "These new polymers could sit at the boundary," Jones said, allowing plastics with disparate properties to be more easily recycled.

The process will work with a variety of molecules to produce a polymer, Harth said, suggesting that the concept provides a new platform to produce plastics.

And that platform, she said, could lend itself to producing a variety of functional plastics from natural oils and other molecular sources. "This has exciting sustainability possibilities for the industry."