An electronic signal expands the material by a factor of 100 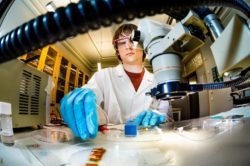 Researchers at the Laboratory of Organic Electronics, Linkoping University, have discovered a material that can both increase and reduce its volume when exposed to a weak electrical pulse. In a sponge, or filter, the researchers can control the size of particles that pass through.

Materials, such as solids and gels, that change volume depending on temperature or pH have long been available. Such materials are used in control units (one example of which are windows in greenhouses that automatically open and close depending on the temperature). They are also used in robots and in other electromechanical systems and in applications in biomedicine. One property that researchers have, however, long sought is the change of a material from a solid form to a gel state with the aid of an electrical signal. It is particularly desirable that such electronic control of the phase transition is reversible. The goal is to be able to control the volume by electrical means. This is possible in current materials, but researchers have only been able to achieve at most a doubling of the volume.

Scientists at the Laboratory of Organic Electronics, Campus Norrköping, have now discovered a new material, a conducting polymer, that can increase its volume by a factor of more than 100. The material was synthesized in collaboration with researchers from Imperial College in London. The change takes place when the material is placed into an electrolyte and subjected to a weak electrical voltage of +0.8 V. If a negative voltage, -0.8 V, is instead applied, the material contracts, nearly the whole way back to its original volume.

This is a significantly larger volume change than those previously reported, not only in conducting polymers but also in other materials controlled by an electrical signal.

Experiments carried out by Johannes Gladisch and Eleni Stavrinidou have involved the conducting polymer being placed as a film with a thickness of a few micrometres around an electrically conducting carbon fibre (shown in the video linked here). When electrical pulses with magnitudes of +0.5 V or +0.8 V are applied, the material changes its internal structure, then absorbs water and is finally converted to a gel that expands to 14 or 120 times the original volume. When pulses of magnitude +/- 0.5 V are repeatedly applied, the material expands by approximately 300%, or to three times, with respect to its previous contracted state. The change in volume is reversible.

The scientists also describe an application in the article, published in Advanced Science. This is a smart sponge, or filter, in which they can control the expansion electronically, and in this way change the pore size by 85%.

"We can control the pore size of a filter electronically, and potentially actively control the size of particles that pass through. This means that the properties of this smart filter can be dynamically changed to allow different types or different sizes of particle to pass through. This function can be used for sieving, filtration, purification, and in process chemistry. It may also have applications in medicine and biochemistry", says Magnus Berggren, professor in organic electronics and director of the Laboratory of Organic Electronics.