Polymer researchers can more than plastic 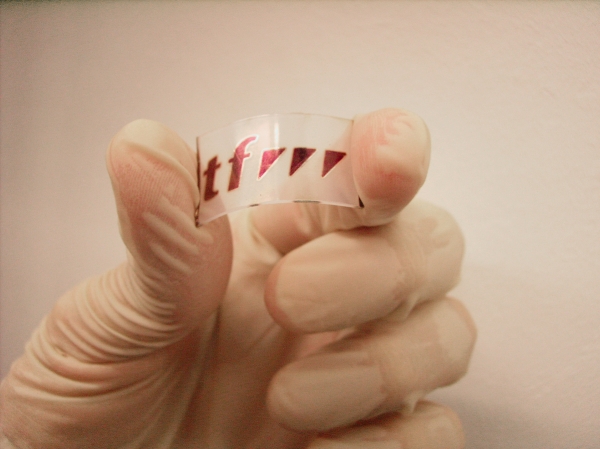 The UV-absorber (here as the logo of Kiel University’s Faculty of Engineering) is even applicable on flexible materials. [Foto: D. Schimmelpfennig/CAU]

Ultraviolet light (UV) has not only harmful effects on molecules and biological tissue like human skin but it also can impair the performance of organic solar cells upon long-term exposure. Researchers of Kiel University and Helmholtz-Zentrum Geesthacht have now developed a so-called plasmonic metamaterial, which is compatible with solar technology and completely absorbs UV light – despite being only 20 nanometers thin.

It is one of the first metamaterial perfect absorbers designed for such high frequency. The study was recently published in the renowned scientific magazine “Applied Physics Letters”. "Metamaterials are artificial materials composed of designed unit cells which can show striking and unique electromagnetic properties not inherent in the individual constituent components. These artificially structured composites could potentially fill the gap in the electromagnetic spectrum where material response is limited and facilitate the building of new devices", explains Mehdi Keshavarz Hedayati, member of the group Nanochemistry and Nanoengineering at Kiel University and first author of the paper.

In organic solar cells, degradation of the cells by long exposure to sunlight (i.e. UV exposure) is a challenging problem, which limits the application of organic cells. Therefore, a material that totally blocks the UV light could principally improve the durability of this class of solar collecting materials.

"Since our perfect absorber can be deposited on even flexible substrates, we envision that this structure can be potentially used also in thin film solar panels which are intended to be used in next generation clothing industry", Hedayati adds. The researchers’ metamaterial stays highly absorbent even at oblique light incidence which is very advantageous for their potential application for solar energy.

"We have had already shown the high absorption of this class of metamaterials in our previous articles but here, we shifted the operation frequency of our former perfect absorber to a higher frequency (UV) by replacing gold or copper by silver", Professor Mady Elbahri says, head of a joint research group of Helmholtz-Zentrum Geesthacht and Kiel University and leader of the project. "The fabrication of any metamaterial to operate in UV frequency is a very hard task with the existing nanolithography based methods. Our designed metamaterials are fabricated with co-sputtering which is a routine technique in thin film technology and that makes our idea applicable for large scaling."

"The current approach is enjoying ease of fabrication and its large scaling is relatively cheaper compared to other metamaterials fabrication methods." say Professor Franz Faupel and Dr. Thomas Strunskus from Kiel University’s Multicomponent Materials research group, coauthors of the study. “We still have to work, though, to improve the system’s performance and stability in harsh environments”. Nevertheless, it is conceivable that the new concept will find application in many other fields than solar technology as well. In medicine, for instance, where it could be used in sensors to detect cancer pathogens in the human body.

The idea brought Professor Mady Elbahri the special prize of the Schleswig-Holstein "ideas competition" in 2012. The work on the absorber also brought Mehdi Hedayati the "Khwarizmi Youth Award", a prize given to young Iranian researchers by the Iranian Ministry of Education for outstanding achievements.

Elbahri and his colleagues are members of the Collaborative Research Center 677 “Function by Switching”, which is funded by the German Research Foundation (DFG). Here, the scientists investigate molecules, which work like machines and could make Elbahri’s absorber smart. Instead of metal particles in the top layer, they want to use molecules, which can be switched on and off and thus control the device’s function.

Information about the new material: The researchers designed a structure that is composed of three main layers. The top layer, which is exposed to the light, is a nanocomposite wherein nanoparticles of silver, with an average diameter of 5 nanometers, are dispersed in a silicon dioxide matrix. A silicon dioxide film and a silver film constitute the second and third layer. In this stack, the whole UV-A light gets absorbed due to the intelligent structural design: the silver film (bottom layer), functioning as a mirror, multiplicatively reflects the incident light which interacts with the silver nanoparticles and gets absorbed or scattered. Additionally, light destructively interferes between the layers and hence reduces the reflectance. A strong light confinement between the small gaps of the particles due to collective oscillations of the conduction electrons of the nanoparticles, so-called surface plasmons, adds it all up to a perfect absorbing material.