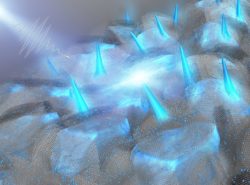 Lithium-ion batteries are used in various electronic devices. But, they also come with potential hazards, particularly if the battery is damaged or overcharged. This usually occurs because, in its overcharged state, spiky structures called 'lithium dendrites' get deposited in the battery. Now, scientists at Okayama University use a technique called 'operando nuclear magnetic resonance' to track the precise mechanism of dendrite formation. They also extend their experiments to sodium-ion batteries, making their practical application easier.


Lithium-ion batteries (LIBs) are a common type of rechargeable batteries. Their versatile nature and numerous applications in all sorts of electronic devices--from mobile phones to cars--makes them seem too good to be true. And perhaps they are: recently, there has been an increase in the number of fire-related incidents associated with LIBs, especially during charging, causing serious concerns over their safety. Scientists now know that these incidents can be due to the use of a broken or unauthorized charger. Often, improper use of these chargers and overcharging can lead to the formation of spiky structures on the negative electrode of the battery, called "lithium (Li) dendrites," which penetrate through the barrier between the negative and positive electrodes and cause a short circuit. Thus, looking at exactly how dendrite formation occurs is crucial to improving the safety of LIBs.

Scientists at Okayama University, led by Associate Professor Kazuma Gotoh, recently took a step in this direction, in a new study published in Journal of Materials Chemistry A. They delved into finding the precise mechanism of dendrite formation in LIBs, in an effort to overcome their limitations and make their practical application easier. Dr Gotoh explains, "We wanted to analyze the formation of metal dendrites in secondary (rechargeable) batteries and contribute to improve the safety of batteries."

Previous studies that tried to understand the process of Li dendrite formation were successful to some extent: they revealed that when the battery is in an overcharged state, dendrite formation occurs in the "overlithiation" phase of the battery cycle. But, these experiments were performed ex situ (outside the actual electrochemical environment), and thus the exact time of onset of dendrite formation was not found. In their new study, Dr Gotoh and his team decided to overcome this limitation. They figured that by applying "operando" methods (which replicate the electrochemical environment) to an analytical technique called "nuclear magnetic resonance" (NMR), they can accurately track the Li atoms in the inner structure of materials, which is not possible when using ex situ methods.

Using this technique, the team had previously succeeded in observing the overcharged states of two types of negative electrodes--graphite and hard carbon electrodes--in the overlithiation phase of an LIB. In the new study, they took this to the next level by observing the state of these electrodes during the lithiation and delithiation process (the "charge and discharge" cycle of the battery). Their NMR analysis helped them to track the precise onset time of dendrite formation and Li deposition in the overcharged battery, for both the graphite and hard carbon electrodes. In graphite, they found the Li dendrites form soon after the "fully lithiated" phase of the electrode occurs. In the hard carbon electrode--in contrast--they observed that dendrites form only after "quasimetallic" Li clusters occur in the pores of hard carbon. Thus, the scientists deduced that when the battery is overcharged, the quasimetallic Li cluster formation acts as a buffer for the formation of Li dendrites in hard carbon electrodes. They even applied the same analysis to another type of rechargeable battery, called sodium-ion battery (NIB), and found similar results. Dr Gotoh explains, "We found that some carbon materials having inner pores (such as amorphous carbon) have a buffer effect for the deposition of Li and Na dendrites during overcharging of batteries. This knowledge will play an important role in ensuring the safety of LIBs and NIBs."

By revealing the intricacies of the dendrite formation mechanisms in LIBs and NIBs, Dr Gotoh and his team provide useful insight into their safety. In fact, the scientists are optimistic that their findings can be applied to other types of rechargeable batteries in the future. Dr Gotoh concludes, "Our findings can be applied not only to LIBs and NIBs but also to next-generation secondary batteries such as all solid-state batteries. This is an important step in making their practical application easier."

With the findings of this new study, we can hope that we possibly are one step closer to realizing our dream of truly sustainable energy resources.