While oysters are commonly associated with being an aphrodisiac, apparently our face wash doesn’t reciprocate the feeling. According to a recent study published in the journal Proceedings of the National Academy of Sciences, oysters aren’t getting it on like they used to because of microbeads found in our cosmetics.

For two months scientists assessed the impact of polystyrene microspheres (micro-PS) on the physiology of adult Pacific oysters that were exposed to micro-PS during reproduction. Results shows the oysters had 41% fewer offspring, which grew slower than normal. 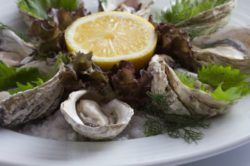 “Oysters were exposed to polystyrene microparticles, which were shown to interfere with energy uptake and allocation, reproduction and offspring performance,” says the study. “A drop in energy allocation played a major role in this reproductive impairment.”

Around four to 12 million tons of plastic gets dumped in the ocean annually. Since plastic doesn’t decompose it breaks into millimeter-sized particles called microplastics, which are similar in size to the phytoplankton that oysters typically consume, said the study.

However, there is hope for the succulent appetizer staple, I mean, filter-feeding organism. PlasticsToday reported late last year that President Obama has signed into law a bill phasing out the production of all plastic microbeads in soaps, scrubs and other healthcare products by July 1, 2017, and the sale of such beauty products by July 1, 2018.

But for now, I guess it's safe to say with Valentine's Day approaching that Marvin Gaye's "Let's Get it On" probably won't make the playlist. (Plastics Today/GD)