Ghostbusters in the desert 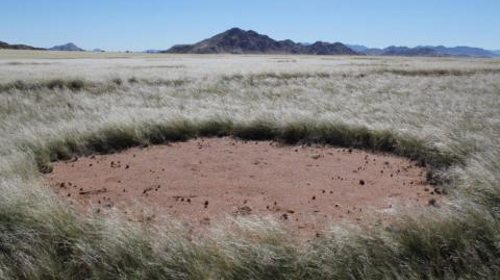 According to the Himba people, the large circular patches with reduced vegetation on the floor of the Namib Desert are a supernatural phenomenon of mystical origin. The “fairy circles” appear similar to crop circles, a phenomenon known for centuries and by some attributed by some to be signs of extraterrestrial visitors. South African scientists have worked to unearth the secret of the mysterious circles. In their view, the circles are created not by extra-terrestrial forces, but rather by subterranean phenomena.

It gets hot, really hot, in the Namib Desert; and really cold as well. In some places temperatures hover above the 50 °C mark during the day and descend below the freezing point at night, it is an incredibly dry, arid, but in places grass-covered desert. When the sun rises it not only heats up the desert, it also exposes a spectacular sight: Thousands of mysterious circles cover the vast expanse of the Namib, side by side, like pockmarks on the desert’s sand-colored face.

The so-called “fairy circles” are surrounded by tales and myths. Their uniform appearance, sheer number, and distribution have always sparked human imagination. Natural displays of such regularity are typically awarded a deeper meaning or attributed to higher powers and tales are spun. The tales of the Himba, a semi-nomad people in Northern Namibia, relate that a dragon lives underneath the desert sand and breathes fire. The fire rises to the surface in hot bubbles singeing the ground in circular shapes – the birth of a fairy circle.

Of course the description is naïve like most folklore; however, at a second glance it appears closer to the truth than the explanations offered by scientists in the 1970s and 1980s, which many still cling to. According to those theories, the fairy circles are remnants of termite activity: In their search for food, termites supposedly devoured the thin grass cover in a circular area, presumably never venturing more than a certain distance from their mound. Other experts suspect that ants, clearing the ground of grass seeds, have caused the circular patches with no or dying vegetation. (Basic and Applied Dryland Research 1, 2 (2007), 121-137).

„This is not the case“; scientists of the University of Pretoria in South Africa now discard previous theories as well as oral tradition. Instead of relying on speculation, chemists Yvette Naudé and Egmont Rohwer from the Department of Chemistry and their colleague Gretel van Rooven from the Department of Botany had gone into the Namib Desert to investigate the matter based on scientific facts using chemical analysis instrumentation and on-site observation of insect activity. Their investigative research allowed the scientists to draw a scientifically based conclusion proving natural geochemically based causes (Journal of Arid Environments 75, 5 (2011) 446-456).

The ground is breathing
Naudé and her colleagues first went on location in the desert for a visual examination, similar to what police detectives do at a crime scene. For the record: fairy circles are circular areas on the ground, which are free of vegetation or covered by still live (yellowing) or dead (gray) vegetation. They are typically surrounded by comparatively lush vegetation. “None of the dead grass in the circle showed marks caused by termite mandibles”, Yvette Naudé explains.

According to the scientist, the fact that the inner circle contained dead as well as live vegetation indicated that this was a fairy circle in the making. Thus the theory of hungry termites and grass seed-collecting ants could be investigated on site during the formation of a circle and could not be confirmed.

Another observation was made and yet another theory formed and tested: the partly lush vegetation at the edge of the fairy circles could indicate the involvement of allelopathic compounds. Some plants release these in order to harm other forms of vegetation that are trying to encroach on their territory. Are plants on the vegetation-rich edge of the fairy circle able to do so? At first glance, the idea seemed both possible and plausible, according to Yvette Naudé. However, potting trials proved that allelopathy did not play a role.

Additionally, fairy circles also develop in vegetation-free, sandy areas: “The sandy ground in these fairy circles looks shaken and churned up”, the researchers describe, “similar to craters found on the ocean floor, which are caused by gas bubbles percolating out of the ground.”

Based on this observation, Yvette Naudé and colleagues developed the hypothesis that gases and fluids of geological origin play a role in the formation of the fairy circles. The scientists’ theory: “Gases and fluids seep in specific migration pathways. Once the gases reach the soil surface they start to disperse forming a circle.” There are plenty of potential gas sources in Namibia, suggests Yvette Naudé. These include both big oil and natural gas reservoirs and the country’s geothermal activity visible at the hot springs in Namibia’s spa towns.

The scientists started their investigations by determining the soil gas composition in selected fairy circles as well as in “the matrix”, areas between the circles where there are no geobotanical anomalies. Gas samples were collected by inserting suitable collection funnels into the ground. Several times throughout the day the levels of carbon monoxide, carbon dioxide, oxygen, hydrogen sulfide and nitrogen dioxide were determined using a portable gas analyzer. The gas analysis allowed a number of conclusions to be drawn concerning the soil chemistry, reports Yvette Naudé.

Carbon monoxide, for example, allowed conclusions about the presence of natural gas. Natural gas is not considered toxic for plants, but it turns out to be an important stress factor for the vegetation. The presence of hydrocarbons was shown to lead to an increase in the activity of oxidizing and reducing (e.g. sulfur-reducing) bacteria, which again lowers the level of oxygen in the soil.

This may have far-reaching, almost cascading effects for the soil chemistry, the scientists explain: “Apart from the oxygen decreasing periodically in the soil of the fairy circles, as we have found during our measurements, an upwelling of gases can lead to increased formation of organic acids, which influence the pH value of the soil and therefore the availability of important minerals for plant development. ” Plants grown in soil collected from fairy circles”, the scientists report further, “did not flourish, in contrast to plants that were planted in soil from the vegetation-rich edges of the fairy circles and in the matrix”.

From theory to practice
To develop a clearer picture as to the presence and distribution of hydrocarbon compounds in the soil of the fairy circles, the scientists turned to thermal desorption in combination with gas chromatography and mass-selective detection. The advantages of the thermal desorption technique: “It is cost effective, simple and it doesn’t rely on toxic organic solvents,” explains Yvette Naudé.

Solvent-free extraction brings several benefits: Cost savings; a cleaner base-line and lower detection limits; a clean chromatogram without solvent peak masking of analytes; higher sensitivity since there is no analyte dilution; and last, but not least, cleaner laboratory air. Thermal desorption GC/MS also requires much less sample than, for example, Soxhlet extraction, which is commonly used for isolating and analyzing hydrocarbons in soil.

The scientists took soil samples in carefully selected locations as follows: A 40 gram sample of soil was placed in a prepared glass vial, a special polymer-coated (polydimethylsiloxane, PDMS) stirrer, a so-called PDMS-Twister, was added and the vial was sealed. The Twister has been used successfully in many applications to extract organic compounds from solid, liquid, and gaseous samples. PDMS is used as sorption phase to concentrate extracted analytes from the sample. Back to the soil samples: The sealed vial was heated to 50°C for 50 minutes.

When the scientists then removed the twister from the sample, magnetic particles were clearly visible at its end, another clue confirming the theory of a micro-seepage of hydrocarbon compounds in the ground, which, according to Yvette Naudé, is known to induce microbial changes of magnetic and iron-containing minerals.

The analysis results support the theory of the scientists: “We detected alkenes and microbiological metabolites of alkanes. Higher alkene concentrations were found in soil from the center of the fairy circle and lower concentrations in the matrix, the area without geobotanic anomaly.” This suggests that there is strong microbial activity in the soil inside the fairy circles. Additionally, the alkane-alkene concentration ratio found allowed the scientists to draw conclusions as to the activity of a particular fairy circle: higher ratios suggested a newly active circle. “Our observations and our results do not support the involvement of termites or ants”, concludes Yvette Naudé.

However, one thing remained to be explained – why are fairy circles round? Yvette Naudé: “The overlying sand causes dispersion of rising gases from a seep, creating a funnel-like formation which is seen at the surface as a circle. The circles are not all the same size, and can vary dramatically depending on seep rates, sand conditions, and the underlying geology.”

Acknowledgment
Special thanks go to Dr. Yvette Naudé and colleagues as well as to Mr. Marc Springer, Namibia Allgemeine Zeitung, for supplying the photographs used in the article.