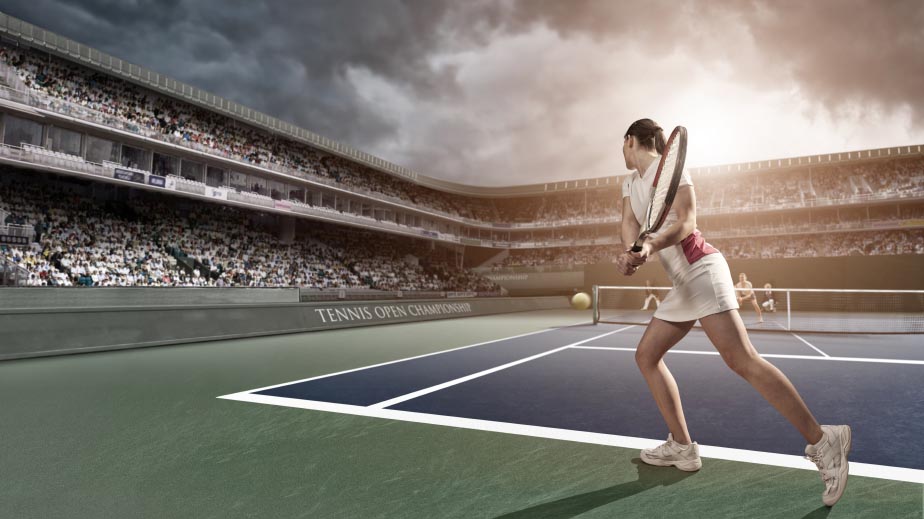 Professional tennis players appreciate artificial grass courts: they are safer for the players themselves, while they are easier for groundskeepers to look after. While artificial turf pitches with underground heating enable football players to play their game at a consistently high level all year round too.

New York, September 2011. The heavens did not mean well with the players at the US Open Tennis Tournament. It poured with rain and the Center Court became dangerously slippery. Puddles formed on the hard courts and it was difficult for the players to find their rhythm because of the constant interruptions. The groundskeepers made desperate use of the plastic tarpaulins to cover the courts.

Rain can cause considerable problems with the surface of a tennis court, whether it is a hard court, a grass court or a complexly structured clay court. Each of these surfaces has at least one special feature that tennis players have to come to terms with: it is a well-known fact that balls move fast on hard courts. They bounce extremely high on grass courts cut short and generously irrigated the English way, so that serve-and-volley specialists and players who like to come to the net love these courts. Reddish-orange clay courts, on the other hand, consist of crushed bricks and are considered to be slow, sensitive to changes in the weather and unpredictable, while they also require intensive care. They are loved by many tennis players even so, because they can “slide into” the balls during the games, which eases the strain on their joints.

Everyone has to watch out when it starts to rain, however ...

Let us take a closer look at what exactly is involved here: artificial grass is a system that consists of a textile layer - profiled blades made from the plastic polypropylene - woven into a synthetic fabric web and bonded with a stable substructure. How well artificial grass works depends primarily on the filler material in which the polymer blades are embedded.

The conventional filler that is used is sand, that neither allows rainwater to soak through quickly nor guarantees a good, long-term playing surface because of its consistently small, densely packed particles. Both of these parameters can be influenced positively when a filler is used that has particles of varying size, such as quartz crystals containing silicon oxide, surrounded by a glass-ceramic layer coloured in accordance with individual preferences. This material is highly porous and has optimum permeability with respect to rainwater. The edges of the particles are rounded off too; the plastic blades of grass in them do not buckle irreversibly even under tremendous stress; they return to their upright position, ready to let the ball bounce off at the appropriate angle and with the necessary spin. From the point of view of sport physiology, this is an optimum surface on which balls bounce perfectly.

Players love it – and so do groundskeepers: the artificial grass is already dry and ready to be played on again completely normally again only a short time after it has rained; tarpaulins are no longer needed to cover the courts and the surface only has to be replaced by the groundskeeper every five to ten years instead of every year. Everyone is impressed by this – not only Grand Slam tournament venues but also the local tennis club round the corner.

Talking about round the corner: the plastics trade fair hopes that Fortuna Düsseldorf enjoys its new artificial grass pitches in future. Thanks to the heating system underneath the grass, they can be played on fully effectively all year round, even when the ground temperature is below freezing everywhere else. 40,000 metres of plastic piping were, in total, laid for this grass heating system, by the way. Further evidence of the fact that there is practically no alternative to polymer materials as far as functionality and cost effectiveness are concerned. GDeußing