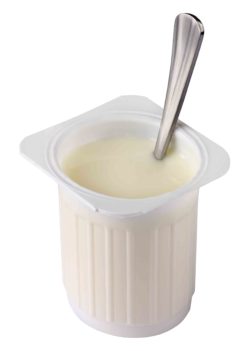 Light, stable, safe and simple to transport: these were the main requirements that the yoghurt packaging was supposed to satisfy. On 10. May 1963, Meierei-Zentrale Berlin presented its new, square tub made of plastic. In doing so, it pioneered a convenient way to eat yoghurt that had been unknown until then.

Before yoghurt was filled in plastic tubs, jars with a screw top were used. These glass containers were anything but light and tough, however, which proved to be a disadvantage where safe and inexpensive transport was concerned. The jars made a great deal of noise while being transported too. Plastic was a welcome solution to these problems.

The switch from glass containers to plastic tubs proved to be challenging, however. The main difficulty was to find a material that did not form holes when moulded into a square tub with a wall thickness of only eight millimetres and that was sufficiently stable as well. Polystyrene (PS), a thermoplastic that is easy to shape under the influence of heat, was an appropriate choice that is still in widespread use today and is obtained from liquid styrene via polymerisation.

Several processes were developed to give the PS the required square shape. One of them is, for example, the form-fill-seal process (FFS), in which all the operations – from forming to filling of the tubs – are carried out in one and the same machine. Polystyrene film is cut to size before being heated and pressed into the required tub shape. The yoghurt is then filled in the tub, which is subsequently sealed with aluminium foil, punched out of the web and transferred to a conveyor belt.

In contrast to the manufacturing process, marketing yoghurt in plastic tubs makes it anything but complex for the consumer to eat: all he has to do is pull the lid off and stick a spoon in. Each yoghurt tub contains one portion, which is both easy to store and simple to eat on the move. It was no surprise that plastic yoghurt tubs received an enthusiastic response from consumers. Plastic tubs continue to be the leading yoghurt container to this day. (Lennart Wehmeier / Guido Deussing)