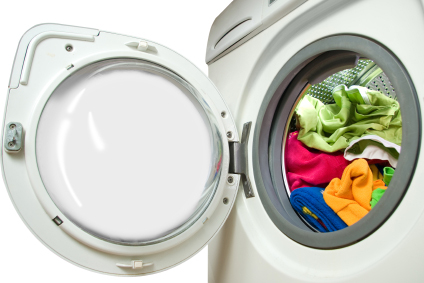 In a four-person family, the washing machine is in operation about one-and-a-half hours a day. On average, it washes, rinses and spins about 250 times a year, cleaning some 1,000 kilograms of dirty washing – an amount that is increasing all the time. Its components – particularly the rubber hose systems and rubber gaskets – are subjected to greater chemical and mechanical stresses than just about any other household appliance. All the sealing property and stability requirements can, however, be satisfied, thanks to universal, resistant ethylene propylene diene monomer (EPDM) rubber. Elastomer research is helping to make sure this remains the case.

Countless litres of water and various washing solutions flow through a washing machine over the years. In addition to washing effectively enough, this household appliance has to do one thing more than anything else: it must not leak. Hose systems and gaskets should not go brittle and should definitely not tear suddenly. Moisture, detergents and cleaning agents – particularly alkaline agents – as well as high water temperatures must not have an adverse effect on the material: this is the requirement profile compiled by experts from, for example, well-known manufacturers of household appliances. On the assumption that white goods of this kind have a useful life of ten or twenty years, this also means that all the rubber parts have to last this long too – that at least is the theoretical plan. However one looks at it: the elastomers used therefore need to be extremely hard-wearing and resist ageing very effectively.

Rubber experts are convinced that synthetic rubber made from EPDM complies with the strict standards made by washing machine manufacturers in every respect. It remains completely leakproof, is particularly elastic and abrasion-resistant and does not discolour. Another advantage when it is used in washing machines: this synthetic rubber only swells minimally even under the most unfavourable of conditions and resists aqueous solutions of detergents, fabric softeners and other laundry treatment agents for a long period of time at washing temperatures of 95 degrees Celsius.

Parts moulded from EPDM are the preferred choice where exacting demands are made on the elasticity of the components. Although the door sealing ring of a washing machine is expected to keep the washing water in, for example, it is also supposed as far as is possible to behave as if it was not even there. This means that the material used has, on the one hand, to be stable enough to enable the sealing ring to be attached not only to the washing machine housing but also to the suds container. On the other hand, however, it is supposed to be extremely elastic, so that it does not transfer the forces produced during the spinning cycle from the rotating suds container to the housing. Otherwise the washing machine would not stay still when in operation; it would move around instead, as washing machine experts emphasise.

The mechanical stresses to which a door sealing ring is exposed depend in the final analysis on the displacement of the suds container that is attributable to imbalance during the spinning cycle. This occurs in washing machines when the laundry is distributed unevenly in the drum – collecting inside a pillow in the extremest of cases. This prevents consistent rotation. Imbalance can never be avoided entirely, so manufacturers always include specific displacement tolerance when designing their appliances. A force that produces a weight of ten kilograms acts on the door sealing ring in this context. EPDM can cope with this tensile force without any difficulty.

However: EPDM door sealing rings are not immune to objects with pointed ends or sharp edges that can get into the washing machine via trouser pockets, for example: a nail, a screw or a hairpin can destroy them. EPDM does have high tear propagation resistance properties, on the other hand. In other words: the door sealing ring is generally stable to a certain extent in spite of a hole and drum movement. Although flooding of the washing machine location is not an immediate risk, the gasket definitely needs to be replaced. Modern, fully automatic washing machines also have special safety systems for such cases.
GDeußing