Still open to the public until 30. October: plastic-based art underground in Thuringia 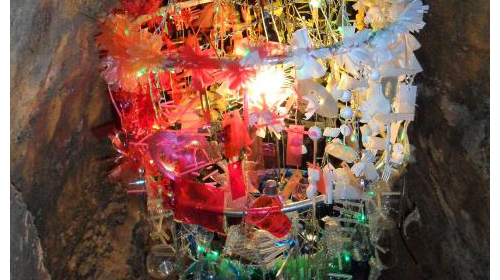 Plastic-based art goes underground: more than 50 different installations created by artists from Europe and Eastern Asia are still on show at a very unusual place in Gera – the third-largest city in Thuringia / Germany – until the end of October: not in a museum but in five of the 220 “Höhler” (beer cellars) underneath the old part of the city.

“Höhler” is the name given to vaulted cellars that were built in the Zechstein rock up to eleven metres deep underneath the houses in Gera to store beer from the end of the 16th century onwards. Since the local wine did not taste particularly good, Gera turned to beer instead in the late Middle Ages: hops were planted in the vineyards instead of grapes and all the house owners were granted the privilege of brewing and even selling beer (Gera “brewing rights” of 1487). Since more cool and dark locations were therefore needed, in which the beer could be stored for a longer time, the “Höhler” cellars were built.

Nowadays Gera is overshadowed as a black beer city by its neighbour Bad Köstritz and the cellars have not been used to store beer for a long time now. In the Second World War they proved to be very effective bomb shelters and many of them were connected together to create escape routes in case some of them caved in – the result is an extensive labyrinth of underground passageways nine kilometres long with enchanting little niches that has in the meantime been discovered not only by tourists but also by artists: in 2003, the association dedicated to preserving the cellars co-operated with the town authorities to launch the “Höhler Biennale”. Since then, a Gera jury has screened hundreds of applications every two years, then choosing the installation artists whose works fit in best with the genius loci, i.e. that make the most of the cellar environment and that are particularly effective works of art in these surroundings.

The Höhler Biennale is already being held for the 5th time this year: its patron is Christine Lieberknecht, the Prime Minister of the State of Thuringia. 54 artists are using light and shade, silence and sound, the medieval and the modern, minotaurs and olms to present their installations underneath the city in Thuringia. They also focus on the concept of the underworld and various ideas that are associated with it: a hidden empire, a place for things that should not be seen, a hiding place, a dungeon, a grave, an abode for the dead – Hades as it was known to the Greeks – but also a place of pulsating life, where Eros reigns unhindered. It is no coincidence that plastic dominates as the material used to create many of the works of art in the cellars: where the titillating (“Hades der Dessous” by Ursula Reindell) meets the worn and old (Martina Becker’s chandelier decorated with plastic waste), it is only natural that plastics play a prominent role. Even the recycling concept has its place in the context of “Eros and death”: “die and become ...”

A visit to the Höhler Biennale is not just an intellectual experience, however; it appeals to all the senses: in the dimly lit corridors which have to be negotiated to get from one work of art to the next, one loses one’s sense of time and self-perception increases. “The visitor becomes part of the works of art”, as Dr Gitta Heil, director of the Höhler Biennale, points out.

The 5th Höhler Biennale started on 24. June and ends on 30. October (opening times: Wednesday to Sunday 10-18:00). Admission to all five exhibition cellars costs € 5; catalogue: € 10. Further information is available in the Internet: www.hoehlerbiennale.de, www.gera-hoehler.de