Shrink films get a grip 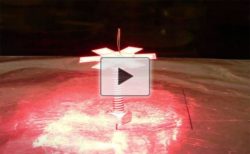 The classic childhood toy, Shrinky Dinks, is being repurposed as grippers that could be used in soft robotics. Image: American Chemical Society

Many people fondly remember playing with toys known as Shrinky Dinks® -- sheets of polystyrene plastic with shapes that kids can color, cut out and heat in an oven, where they shrink into thicker pieces of plastic. Now, researchers have repurposed shrink films for an unexpected use: making strong, durable grippers that could someday encapsulate materials or be incorporated into soft robotics. They report their results in ACS Applied Polymer Materials. Watch it in action here.

Shrinky Dinks® undergo their dramatic transformation because they are shape-memory polymers. Manufacturers pre-stretch the sheets of polystyrene so that when heated above 217 F, they shrink back to their former size. Michael Dickey, Jan Genzer and colleagues wondered if they could exploit these properties to make inexpensive grippers that would be stronger and retain their shape better than other soft materials used for this purpose, such as hydrogels and elastomers.

To find out, the researchers used an inkjet printer to pattern black ink in various shapes onto the surface of polystyrene sheets. When the researchers shone an infrared light on the cut-out shapes, the inked regions warmed faster than the blank areas, causing the polystyrene to wrap around the object to be gripped, such as a hex bolt. Removing the light locked the gripper's shape in place. The team showed that grippers optimized for ink pattern, geometry and number of panels could suspend objects more than 24,000 times their own mass for several minutes before mechanical failure, or 5,000 times their own mass for months.