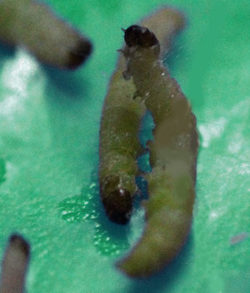 Some bacteria from the guts of waxworms could help eliminate plastic trash. Image: American Chemical Society.

We’ve all heard of bacteria that thrive in the most unlikely places on the planet making a meal out of the most unbelievable materials, including nuclear waste and oil. Now, researchers in Japan have discovered a new species of bacteria that loves to eat plastic! Specifically PET.

The Ideonella sakaiensis bacterium was identified by scientists at the Kyoto Institute of Technology. As they were screening a variety of bacterial candidates able to break down PET, they came across I. sakaiensis , which prefers low-grade PET film and uses it as a source of energy.

While this new type of bacteria is of great interest to scientists trying to find alternative ways to rid the world of plastic waste, it’s not the first one with a penchant for plastic. In March 2011, Nature News reported that scientists found an organism that may be eating plastic in the ocean. That article quoted Tracy Mincer of the Woods Hole Oceanographic Institution in Massachusetts, noting that it has been proven that microbes can degrade plastic. Organisms were found in the Sargasso Sea in the North Atlantic that were eating plastic in a “garbage patch” there.

Garbage patches found in various parts of the world’s oceans once were thought to be “devoid of life;” it turns out that they contain large communities of living organisms and are actually “artificial reefs,” where “microbes can colonize” and thrive. The question that Mincer raised in the article regarded the byproduct of the bacteria’s waste: Is it friend or foe? What will be the effect on other marine life if it’s consumed by larger organisms?

Another article in the Dec. 3, 2014, issue of the American Chemical Society’s News Service Weekly , reported that evidence had been found that bacterial strains from the guts of plastic-eating waxworms were capable of degrading PET. Researchers in China found that “at least two strains of the waxworm’s gut microbes could degrade polyethylene without a pretreatment step . . . the results point toward a new, more direct way to biodegrade plastic.”

I. sakaiensis does its dirty job via an “enzyme called ISF6-4831, which works with water to break down PET into an intermediate substance, which is further broken down by a second enzyme, ISF6-0224. These two enzymes can break down PET into its simpler building blocks.” Several articles reporting on this latest discovery note that the process is rather slow, and that most high-grade PET products, such as bottles and containers, would have to be heated and cooled to break down the strength properties before the bacteria could process it. For example, Dr. Shosuke Yoshida, a microbiologist at the Kyoto Institute, is quoted in a Wall Street Journal article (March 11, 2016) that “a colony of I. sakaiensis could completely degrade a low-grade plastic water bottle in six weeks.”

That’s certainly much faster than many of the chemical additives that people are frantically trying to develop to help plastic degrade in less than a year. And that makes me wonder if we’re going too far in trying to develop “biodegradable” and “compostable” plastics using increasingly complex formulas and chemistry, when simple bacteria can handle the job easily and quickly.

If it weren’t for the fact that urban landfills are “sanitary,” blocking sunlight and moisture and, thus, inhibiting the growth of microbes, we’d probably have hundreds of microbial colonies munching away at plastics and most other types of waste. Perhaps we’ve made things too sanitary. Ultimately, plastic is a “natural” substance manufactured using natural gas and oil created in the earth, so it would stand to reason that there must be a “natural” method to get rid of waste that ends up in the environment rather than in a recycling facility.

But, follow the money, as an old journalism teacher taught me. There’s a lot of money being invested in biodegradable and compostable materials made from everything from weeds, grass and algae, soy beans and corn, trying to get plastic to “disappear” by various methods that haven’t proven to be very fast or effective. I say let the bacteria do the job on plastic thrown into the environment in remote places like the Sargasso Sea and other ocean garbage patches, and even in landfills. It seems quite simple. Of course, there’s no money to be made in letting bacteria and nature take their course.