Polymers are helping to reduce the fuel consumption of aircraft 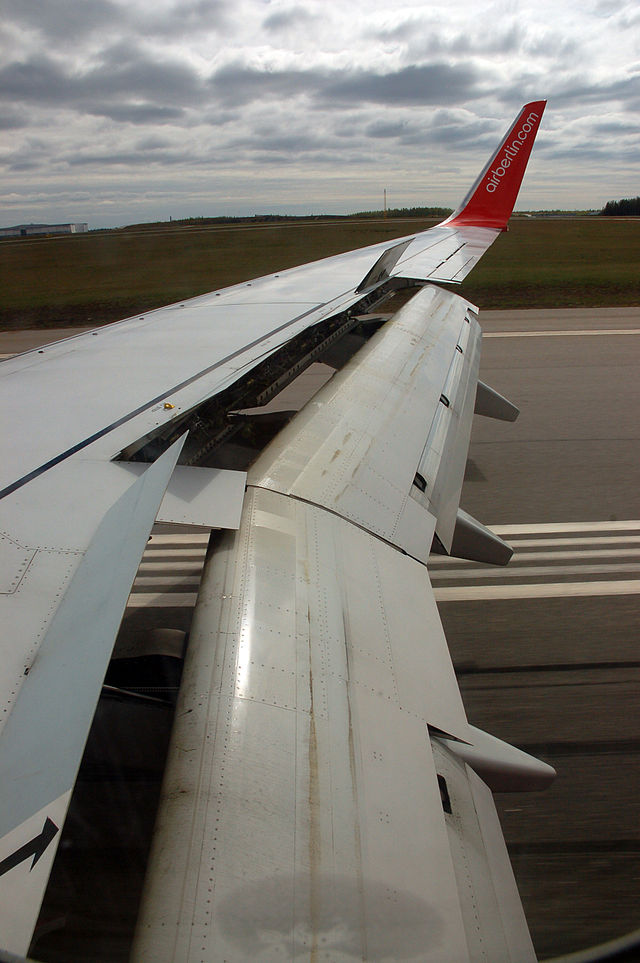 Landing flaps of a Boeing 737

Airlines want to reduce fuel consumption and costs. It is an added benefit if environmental performance can be improved at the same time. In the context of the SARISTU project initiated by the European Union (EU), attempts are to be made to cut the kerosene consumption of aircraft by six per cent. Plastics are playing a major role in this project.

It is vacation time again – and holidays frequently involve flying: about 2.2 billion people get on planes every year, to go either on holiday or on business trips. Although flying is both convenient and safe, there is a downside to it:

Jets pollute the atmosphere when they are in operation, which is bad for the environment. Airlines, aircraft manufacturers and scientists are therefore working on a reduction in the kerosene consumption of planes, with the aims of cutting costs – it is a well-known fact that fuel is expensive – and, in the final analysis, of improving environmental performance as a result too. This is the motivation behind the EU project SARISTU as well, the acronym that stands for “Smart Intelligent Aircraft Structures”.

What this is all about? In contrast to birds, that adjust their wings to the air currents while they are flying and are thus able to take advantage of the forces available and save energy, the aircraft components that influence flying are rigid, inflexible structures. This is true, for example, of the landing flaps that are attached to the trailing edge of the wings and are extended when the plane lands.

Apart from the fact that the landing flaps are extended in one axis, they are completely stiff and inflexible. Martin Schüller, who is a scientist at the Fraunhofer Institute for Electronic Nanosystems (ENAS) in Chemnitz / Germany, explains that the landing flaps need to adjust to the air currents in order to be able to influence the aerodynamics of the aircraft in a similar way to the way birds do when they are flying.

The mechanical systems necessary for this purpose have already been developed, while the control software required has already been programmed too, in co-operation with Italian colleagues from the aviation institute CIRA and Naples University. What is still missing and is currently being tested in prototype form is the casing for the landing flaps, which needs to be comparatively flexible and stretchy like skin. Scientists from the Fraunhofer Institute for Manufacturing Technology and Advanced Materials (IFAM) in Bremen / Germany are working on this at the present time.

One thing at any rate seems to be evident: the fundamental solution can only be polymer-based. “We have created a silicone skin, in which rigid and flexible elements alternate”, explains Andreas Lühring, a scientist from IFAM. Each landing flap consists of five rigid and three flexible sections, on top of which a flexible and stretchy, i.e. extremely resilient, silicone skin is attached. All the flexible elements are located above the mechanical systems, i.e. at the places that are stretched most.

What is special about the material combination outlined above is not just the innovative new structure but also the material itself. The stretchy elements consist of a temperature-resistant elastomer foam material, that does not lose its elasticity either at minus 55°C or at plus 80°C. Four prototypes that are 90 centimetres long – two of them with skin segments – are currently at the testing stage.

But that is not all: six per cent kerosene cannot be saved by making one improvement alone – a whole series of approaches has to be adopted to make this possible. In a second project, the research scientists from IFAM are therefore focussing on the wing tip. The SARISTU syndicate has developed a flap that is fitted in the wing tip and changes its shape during the flight in such a way that air resistance is minimised. No gap must be allowed to form between the flap and the fixed wing, however, because this would neutralise the effect. “We have therefore developed an elastic connecting element involving everything from the chemical composition to the process engineering and the production of the component, says Lühring. This component also maintains its elasticity throughout the temperature range between plus 80°C and minus 55°C – while coping with the strong winds to which it is exposed as well. It is amazing what polymers are capable of doing, isn’t it? GDeußing