Plastics don’t conduct electricity? Nonsense – of course they can! 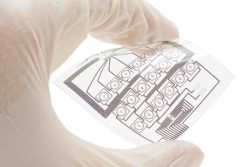 For a long time, the difference was clear and easy to remember: metals conduct electricity, plastics don’t. Now it is recognised that things are in reality more complicated than that. Because plastics are in actual fact able to conduct electricity under certain circumstances. Together with his Japanese colleague Hideki Shirakawa and the US natural scientist Alan J. Heeger, the chemist from New Zealand Alan MacDiarmid was awarded the Nobel Prize in Chemistry for this discovery in 2000. Ten years ago, on 7. February 2007, Alan MacDiarmid died at the age of 79.

As is so often the case, chance played a role in the discovery of conductive polymers too: in the early 1970s, Hideki Shirakawa was in the process of manufacturing polyacetylene (PAC), a plastic that is used – among other things – for electrical insulation, in his laboratory in Tokyo. However, the Japanese scientist made a small mistake when synthesising.

To crosslink acetylene, a catalyst is needed, i.e. a substance has to be added that is in a position to set off or influence a chemical reaction while remaining unchanged itself. Shirakawa used one thousand times the normal amount of the catalyst and ended up with a glossy silver material instead of a white powder.

At a seminar, Shirakawa met Alan MacDiarmid, a professor at the University of Pennsylvania, and Alan J. Heeger, from the University of California in Santa Barbara, who reported that they too had produced a metallically glossy material during the polymerisation of acetylene. The scientists discussed the tests they had carried out and agreed to liaise on further research into their materials. A worthwhile enterprise, since it led in the final analysis to the presentation of the Nobel Prize - the most prestigious award that a natural scientist can receive for his work while still alive.

By adding iodine to the polymer, the scientists succeeded in changing / increasing the conductivity of the plastic. After being presented with the Nobel Prize, MacDiarmid answered approximately as follows when asked about the reasons for this in an interview with the New York Times: iodine, which is a halogen and a strong oxidant and attracts the electrons in the polymer very effectively. The consequence of this is that the electric charge carriers in the polymer are packed less densely, become more agile and can flow – like in metals.

Polyacetylene was therefore the first plastic that made a name for itself as a conductor of electricity. At the physical level, the conductive properties were attributable in particular to the addition of oxidants, which liked to react with atmospheric oxygen too, which led to a considerable reduction in the conductivity level, which was initially very good.

Research scientists have met this challenge in the meantime. Various highly stable conductive polymers are available on the market nowadays that have comparable electricity conductivity levels to copper. There are wide-ranging application areas for conductive polymers, e.g. in LED technology, for the production of efficient displays or solar cells. On closer inspection, it can be said that the Nobel Prize in Chemistry honoured not just the outstanding scientific achievement of MacDiarmid, Heeger and Shirakawa. In addition to this, the prize emphasises the tremendous significance of conductive plastics.

Back to Alan MacDiarmid by way of conclusion. The winner of the Nobel Prize suffered from cancer for some time and did not have much longer to live. In order to say goodbye to his family, he wanted to fly to New Zealand from the USA. MacDiarmid was in a hurry, he did not want to miss his flight. In the flurry of activities on the day of his departure, he fell and injured himself so severely that he died. GDeussing