Plastic in organic waste: a challenge for the ecological recycling economy 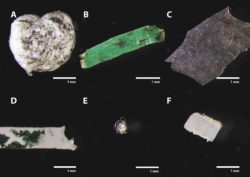 Private households that put plastic materials in their organic waste bins are contributing to environmental pollution. The reason is that communal facilities often use these wastes to produce biogas and process the final residue into organic fertilizer. Tiny plastic particles frequently remain in these fertilizers, thus making their way into soil and water. This was suggested by a study at the University of Bayreuth that has now been published in Science Advances.

The study was the result of close interdisciplinary cooperation under the leadership of Prof. Dr. Ruth Freitag (Process Biotechnology) and Prof. Dr. Christian Laforsch (Animal Ecology). They investigated different biogas plants to find out, among other things, how the source of the organic waste, but also the chosen processing technology and machinery impact the plastic content of the fertilizers produced.

However, the study also shows that the plastic content in fertilizers is not only determined by the origin of the organic waste. Other factors that influence the degree and type of contamination to a large extent are the processing of the waste prior to fermentation and the further processing of the fermentation residues.

“With a bit of effort, it is possible to sort out foreign bodies such as plastics, metals, or glass from the biowaste prior to fermentation. Of course, it would be better not to let them enter into the organic waste to begin with,” explained Prof. Dr. Ruth Freitag. “Organic waste is an important resource in a recycling economy, which deserves to be intensively utilized now and in the future. Our study shows that contamination with microplastic particles is largely preventable, but it requires members of the public and plant operators to act responsibly,” said Prof. Freitag.

The increasing pollution of the environment due to plastics has been a research priority at the University of Bayreuth for many years. For example, the research group led by ecologist Prof. Dr. Christian Laforsch has carried out detailed investigations of microplastic pollution in rivers and lakes in Germany. “In order to reveal the consequences of this alarming development and to be able to respond with suitable measures, we first need to know how the plastic particles get into the ecosystems. This was also one of the initial questions in our new study on organic fertilizers made from organic waste. The findings clearly show that all members of the public, in their home and communal environments, can make a contribution to conservation and the ecological recycling economy,” Laforsch emphasized.