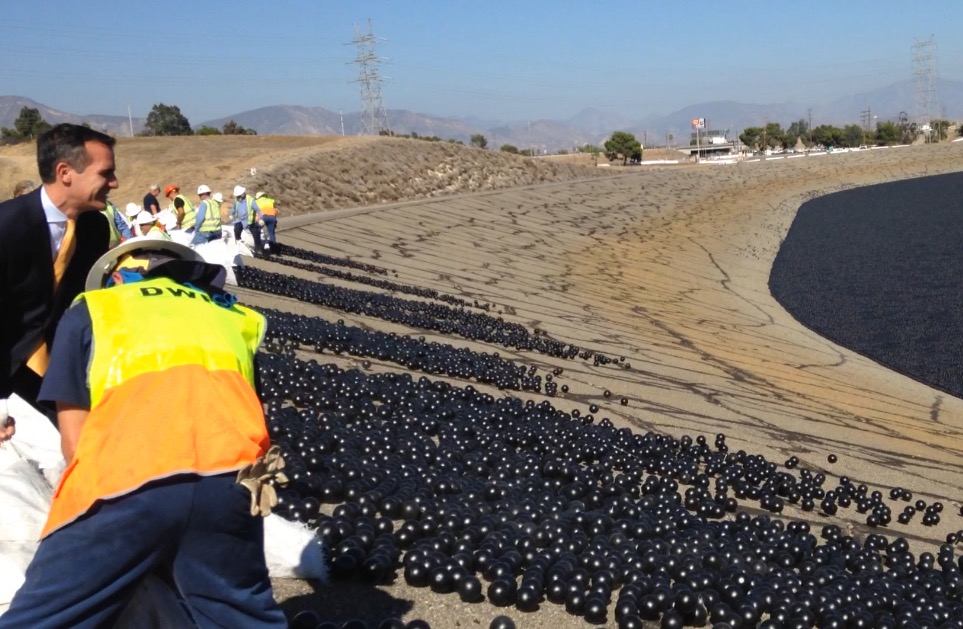 Los Angeles released the last 20,000 “shade balls” into the Los Angeles Reservoir, marking completion of a $34.5 million initiative to protect water quality and to save 300 million gallons of water a year from evaporation. The Los Angeles Department of Water and Power (LADWP)is the first utility company to use this technology for water quality protect—the largest in-basin facility of its kind owned and managed by LADWP.

The small, black plastic balls protect water quality by deterring birds and other wildlife, and protecting water from rain and wind-blown dust. They also help to prevent troubling sunlight-triggered chemical reactions: the reservoirs contain bromide, which occurs naturally in groundwater, as well as chlorine, which was being added to disinfect drinking water. When bromide and chlorine react with sunlight, they form bromate, a suspected human carcinogen.

Dr. Brian White, a now-retired LADWP biologist, was the first person to think of using shade balls for water quality. The idea came to him when he learned about the application of “bird balls” in ponds along airfield runways. The innovative, in-house solution has been used in LADWP’s open-air reservoirs since 2008 to block sunlight, prevent chemical reactions and curtail algae blooms. Currently in place at Upper Stone, Elysian and Ivanhoe reservoirs, the shade balls come with the added benefit of reducing evaporation off the reservoir surfaces by 85-90%.

“In the midst of California’s historic drought, it takes bold ingenuity to maximize my goals for water conservation,” said Mayor Eric Garcetti. “This effort by LADWP is emblematic of the kind of the creative thinking we need to meet those challenges. Together, we’ve led the charge to cut our city’s water usage by 13%, and today we complete an infrastructure investment that saves our ratepayers millions and protects a vital source of drinking water for years to come."

The four-inch plastic balls are made of high-density polyethylene and include UV stabilizer and carbon black color provided by Techmer PM (Clinton, TN), a leading producer of value-added colors and additives for the plastics and fiber industries. Techmer recently partnered with Artisan Screen Printing, an Azusa, California-based blow molder to develop shade balls. Of the 96 million shade balls used on the project, more than 89 million balls were produced by Artisan Screen Printing and include Techmer PM materials.

The development of the balls took three years of close collaboration among Artisan Screen Printing, Techmer PM, and engineers from the Los Angeles Department of Water and Power. By working together to solve problems associated with leaking and cracking at the seam lines, the team was able to create shade balls with a longer life expectancy than previous versions.

“As a company that prides itself in solving our customers’ most challenging problems, we are proud to have partnered with Artisan and LADWP to develop a product that protects part of California’s water supply during this devastating drought,” said Ryan Howley, President of Techmer PM. “As a Los Angeles native, I feel particularly proud of our company’s role in developing innovative solutions to help combat the drought.”

According to a press release from the LADWP, shade balls not only cut back on the need to chemically treat the water to prevent natural occurrences like algae, they are also an extremely a cost-effective way to reduce evaporation each year by nearly 300 million gallons, “enough to provide drinking water for 8,100 people for a full year,” in the words of Councilmember Mitchell Englander.

The balls cost $0.36 each, require no construction, parts, labor or maintenance aside from occasional rotation. GD