More violence in children’s rooms due to LEGO toys 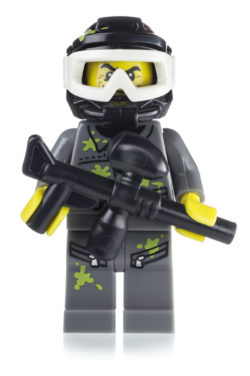 It’s no real surprise: the increasing amount of violence all over the world is reflected not just in the print, electronic and digital media but also in toys and thus in children’s room round the world. Toy manufacturers like Lego are responding to this development, as a study carried out by the University of Canterbury in New Zealand has established.

Scientists from the University of Canterbury in New Zealand have found out that LEGO toys have become increasingly violent in the last few years. The report about their research was published recently in the scientific journal PLOS ONE [1]. It demonstrates that the principle which the company claims to follow in the avoidance of violence as the primary basis for playing with its toys is not confirmed in practice. Instead of this, the new products are designed to promote the use of aggression to fight imaginary evil in conflict situations when playing.

The interdisciplinary research team at the University of Canterbury’s Human Interface Technology Laboratory New Zealand (HIT Lab NZ) [2] has made an intensive investigation of how people interact with technologies and media. To evaluate the potential for violence in media, the team of research scientists developed an instrument to measure how much violence is incorporated in pictures and other media.

Violence is portrayed everywhere nowadays – and not just on television or in video games. Children’s toys reflect the increasing amount of violence all over the world too. Christoph Bartneck, Professor at the HIT Lab NZ and the main author of the research report, stresses that children still play a great deal with such physical toys as dolls, cars and LEGO bricks, although television and video games play a major role in children’s lives in the meantime.

LEGO was a particularly good basis for research, because the fundamental idea of the product has not changed over decades, so that it is possible to investigate how the depiction of violence has developed over a lengthy period of time.

The research scientists from the University of Canterbury have now discovered that LEGO toys have been presented more violently in recent decades. For example, the number of weapon bricks has increased by almost 30 per cent and each set now includes at least one weapon brick. In addition to this, the depiction of violence in the LEGO catalogues has increased by 19 per cent per year, so that almost 40 per cent of the pages now show scenes involving – for instance – shooting or other acts of violence.

Bartneck says that LEGO products do not therefore appear to be as innocent as they used to be. The LEGO company emphasises regularly that violent scenes in the LEGO universe normally take place in a humorous context. The research findings demonstrate, however, that the dominant atmosphere in the scenes is not humorous. The normal consequence of the battle scenes is destruction of material, followed by minor injuries. GD