The new home of the Minnesota Vikings, U.S. Bank Stadium, will become the first sports facility in the U.S. with a transparent roof, permitting outdoor light without weather restrictions, thanks to 3M (St. Paul, MN) technology.

The Minnesota Vikings and 3M (St. Paul, MN) have struck a 10-year deal making the global science company the official “science partner” for the football franchise. Also, the new home of the Minnesota Vikings, U.S. Bank Stadium, will become the first sports facility in the U.S. with a transparent roof, permitting outdoor light without weather restrictions, thanks to 3M technology.

The partnership allows 3M and the Vikings to collaborate on specific creative media projects and provides branded signage inside U.S. Bank Stadium – a 4,800-square-foot banner bearing 3M’s name and logo will hang inside the northeast corner of the U.S. Bank Stadium in downtown Minneapolis. Also, 3M will be the preferred supplier of branded first aid stations in the stadium.

A Vikings representative told that the official ribbon cutting and grand opening is scheduled for July 22 and that the total construction period took 31 months.

“3M is a company that is synonymous with science and innovation in the minds of millions of people around the world,” said Vikings Owner/President Mark Wilf. “We are thrilled to work with a Minnesota-based global innovator like 3M to enhance the game day experience for Vikings fans.” 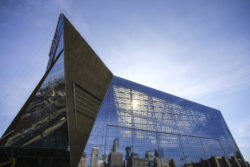 The new Minnesota Vikings' stadium from outside. Source: 3M

Vikings fans will see 3M technology nearly everywhere they look inside the stadium – from the graphic films and DI-NOC architectural finishes in concessions, to the fluoroplastic ethylene-tetrafluoroethylene (ETFE) on the clear, lightweight and self-cleaning roof constructed by Vector Foiltec (Bremen, Germany) with film manufactured from 3M Dyneon fluoroplastic ETFE by Nowofol Kunststoffprodukte GmbH (Siegsdorf, Germany).

The stadium’s 248,000 square-foot roof is covered by 75 three-layer ETFE film cushions, making it the first stadium in the U.S. to use an ETFE roof. The film is designed with a geometric print pattern which scatters the sunlight and prevents a greenhouse effect in summer, but protects fans from frigid temperatures in the winter. It is also only about 5% of the weight of glass and the film cushions allow 95% of daylight to pass through.

“Fire protection products save lives, protect assets and minimize interruption of business operations in the event of a fire. Applications include through-penetration services, construction joints, emergency ventilation and kitchen grease duct structures, as well as other building components that require fire and life safety considerations.” (GD)

"We’re proud to partner with the Minnesota Vikings to help bring the story of 3M science to an even broader audience,” said Don Branch, Vice President and Chief Marketing Officer for 3M. “We can apply our science in so many ways to help provide customer solutions. More than 50 3M products have gone into the design and build of this architectural marvel – U.S. Bank Stadium.”

3M commonly known for its optical films and advanced plastic polymers that offer different properties. The company has been lobbied by animal rights advocates to create a window film for the stadium that could be seen by birds that might otherwise fly straight into the glass and die.

“The Minnesota Sports Facilities Authority, Vikings, 3M and the Audubon Society continue to work together on a potential bird-safe window film solution,” adds Haile-Selassie. “Our efforts have been positive and collaborative, and the group hopes to have more information to share in the near future.”