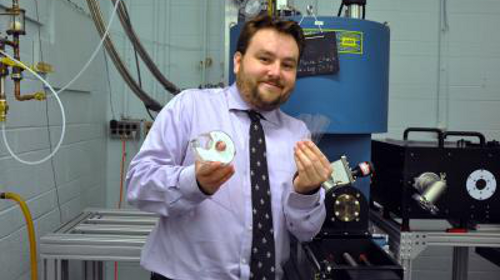 An international team led by University of Toronto physicists has developed a simple new technique using Scotch poster tape that has enabled them to induce high-temperature superconductivity in a semiconductor for the first time. The method paves the way for novel new devices that could be used in quantum computing and to improve energy efficiency.

"Who would have thought simply sticking things together can generate entirely new effects?" said team leader and U of T physicist Ken Burch. High-temperature superconductors are materials that conduct electricity without heating up and losing energy at liquid nitrogen temperatures. They are currently in use for transmitting electricity with low loss and as the building blocks of the next generation of devices (quantum computers).

However, only certain compounds of iron, copper and oxygen – or cuprates – reveal high-temperature superconducting properties. Cuprates were believed to be impossible to incorporate with semi-conductors, and so their real-world use has been severely limited as has the exploration of new effects they may generate. For example, observing the phenomenon of the proximity effect – wherein the superconductivity in one material generates superconductivity in an otherwise normal semi-conductor – has been difficult because the fundamental quantum mechanics require the materials to be in nearly perfect contact.

That's where the poster tape comes in. "Typically, junctions between semi-conductors and superconductors were made by complex material growth procedures and fabricating devices with features smaller than a human hair," explains Burch. "However the cuprates have a completely different structure and complex chemical make-up that simply can't be incorporated with a normal semiconductor."

Source
Department of Physics at the University of Toronto