High-performance material polyimide for the first time with angular shape

Polyimides withstand extreme heat and chemically aggressive solvents, while being considerably less dense than metals. That is why they are very popular in industry, for example as an insulation layer on PCBs or in aerospace applications. However, it is precisely their high stability, which makes polyimides very difficult to process. Neither melting nor etching can be used to bring them into the correct shape. At TU Wien, a new synthesis method has now been developed which opens up completely new possibilities for this material class: it has been possible to produce angular polyimide particles for the first time using a technical trick. 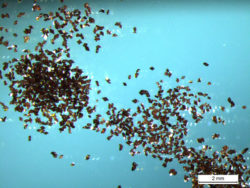 "Small plastic particles are usually obtained as spherical objects," says Miriam Unterlass from the Institute of Materials Chemistry at TU Wien. However, roundish particles are poorly suited for many applications. "Particle-containing liquids are extensively used as paints and protective coatings," says Unterlass. "The geometric shape of the particles then determines how the particles are arranged and move within the liquid." Many such dispersions do not dry uniformly, because an unfavourable current is produced during evaporation which transports the particles in a particular direction. Clearly, one would prefer paints to dry homogeneously.

There have been repeated attempts to give polyimide particles or similar materials an angular shape, but until now there has been little success. Miriam Unterlass’ team at TU Wien has now tried a completely new approach. At first, two different molecules, which usually combine in a rather disorganised manner, are used to produce an angular salt crystal. The salt crystal is formed by conducting the reaction in a gel. The viscous gel slows down the speed of the molecules, which decelerates the reaction, producing well-ordered, high-quality crystals with a diameter of hundreds of micrometres – these are visible to the naked eye. 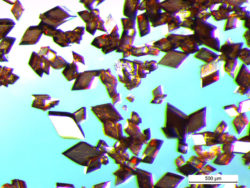 Then comes the crucial step: the crystals are heated, thus producing a further chemical reaction. The salt crystal is converted into polyimide in the solid-state. The salt crystals do not dissolve nor do they melt – it is just the heat that does the trick. Aside, water is created as harmless byproduct. The angular shape of the original salt crystal is retained and an angular polyimide particle lacking any curvature is created.

The material withstands almost any solvent and remains stable up to 700 degrees. There are many uses for resistant particles of this kind. They could be combined with other materials to produce protective coatings, or special materials for space travel. 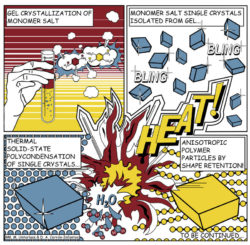 This research success was made possible due to an unusual combination of very different areas of chemistry: "Gel crystallisation, high-performance materials, solid-state synthesis and crystallography are areas that are rarely combined," says Miriam Unterlass. "It was not easy to bring such different approaches together, but it was definitely worth it in the end." It should be possible to use the same method (production of a salt in gel, which is then heated to convert it into polymer particles which take on the crystal shape) to synthesise other high-performance materials. Further experiments are already under way.