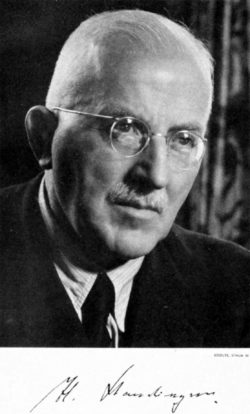 On 10. December 1953, when he was 72 years old, a retired professor and past the peak of his creative scientific career, Hermann Staudinger received belated honours: the Nobel Prize in Chemistry as the unparalleled culmination of his life’s work, which was devoted to basic chemical research and the theoretical foundations of plastics chemistry. Hermann Staudinger’s theory about macromolecular structures and his achievements in the polymer science field brought him titles like “pioneer of polymer research” and “father of macromolecules”. The plastics trade fair (K) would like to take this opportunity to publish a four-part series on its website (www.k-online.de) that takes an in-depth look into “Hermann Staudinger’s life”. In unusual detail and with access to an impressive array of different sources, it draws a chronological portrait of a man who proved to be a productive lateral thinker not only in the scientific community but also in the sociopolitical environment.

Just about every chemist is familiar with Hermann Staudinger nowadays. Although he was an exceptionally capable scientist who had a stunning career – a doctorate at 22, a professor at 26 – he has remained largely unknown to the general public, however. Before Hermann Staudinger focussed on science, he completed a carpentry apprenticeship in his home city of Worms in Germany. He then went on to study botany before switching to chemistry on his father’s advice. Hermann Staudinger opted to concentrate on organic chemistry. In 1912, he was appointed a full professor at ETH in Zurich, where he wrote plastics history and followed the developments of the First World War, calling on the supreme commanders of the German Army to stop all the fighting and negotiate a peaceful solution. In view of the technical superiority of the opposing forces, Hermann Staudinger was convinced that Germany would be defeated. To him, war was not a political instrument. In Switzerland, he matured to become someone who actively questioned mainstream political and scientific beliefs.

In 1920, Hermann Staudinger published his “macromolecular manifesto”, which laid the foundations for plastics chemistry but was rejected by most organic chemists at the time. The resistance Hermann Staudinger faced threatened to isolate him, but he stubbornly maintained his theory and continued his experiments to prove the existence of the “giant molecules” he postulated. In 1926, he accepted an appointment at Freiburg University back in Germany, where he received recognition and fame. A new era began for him, finally, in the 1930s, when he was at long last given the acknowledgement he deserved for the theory of the macromolecular structure of polymers that had initially been rejected so fiercely.

While resistance from the scientific community receded, new problems developed when the Nazis came into power in 1933. What was Hermann Staudinger to expect from “total state control” in his capacity as head of the chemical institute at Freiburg University? And how was he supposed to position himself politically vis-à-vis the Nazi authorities, whose well-known motto was “Anyone who is not for us is against us”? Answers to these questions and further information can be found in our Topic of the Month im December 2019. (Guido Deussing)