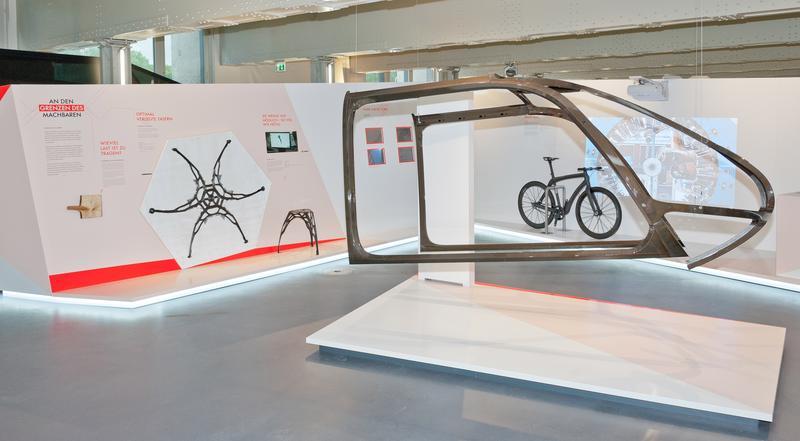 A look at the special exhibition: “Hard material: carbon – the material of the future” that is being held by the Deutsches Museum in Munich.

Visitors are invited to come and see the new special exhibition “Hard material: carbon – the material of the future”, where an insight is being given into the material carbon, from its formation to its processing today. 300 m² of the New Technologies centre of the Deutsches Museum have been devoted to showing the methods applied to process carbon fibres and the areas in which carbon is already being used. In a look ahead, objects are being presented in which the material may be used in future. The exhibition is being organised by the MAI Carbon leading-edge cluster.

Carbon materials are very efficient and can be used for many different purposes. The new material is a challenge to scientists and designers; new products and processes are currently being developed in numerous areas. The special exhibition shows results of this pioneering work in aerospace, vehicle and plant manufacturing, medical technology and material research applications. One example of the use of carbon in lightweight vehicles is the passenger compartment of the BMW i3 that is on show. It is the first passenger compartment in the world made from carbon that is being manufactured automatically on a large scale. Another highlight is a free-swinging “singing chair” made from very lightweight and rigid carbon fibre-reinforced plastic (CFRP). The chair does not have a loudspeaker; instead of this, it becomes the resonance chamber itself, in which two “voice coils” make the chair “sing”. An Ariane booster housing illustrates the potential future uses of CFRP in the next generation of rockets. At the King Arthur exhibit, visitors can see for themselves that carbon really is a “hard material” by pulling on a carbon rod that is only two millimetres thick.

Together with the special exhibition, a permanent exhibit is being opened in the children’s section, where the youngest visitors to the museum can familiarise themselves with the material. A bicycle and a small bridge made of carbon are available there to be tried out.

“The purpose of the exhibition at the Deutsches Museum is to demonstrate the unique nature of carbon as a material and to enable it to be experienced with all the senses”, explains Dr Hubert Jäger, Management Board Chairman of Carbon Composites e.V. (CCeV). The aim that MAI Carbon – a CCeV project – wants to achieve with the special exhibition is to explain the material and to outline a future in which carbon fibre composite technologies will be playing a major role. Professor Wolfgang M. Heckl, Director General of the Deutsches Museum: “As an interdisciplinary educational institution, the Deutsches Museum is the ideal place to get millions of people enthusiastic about carbon as the material of the future.”