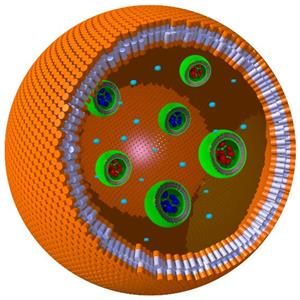 A close-up of a polymer cell with organelles. (Source: Radboud University Nijmegen)

For the first time, chemists have successfully produced an artificial cell containing organelles capable of carrying out the various steps of a chemical reaction. This was done at the Institute for Molecules and Materials (IMM) at Radboud University Nijmegen. The discovery was published in the first 2014 issue of the journal Angewandte Chemie. [1]

It is difficult for chemists to match the chemistry in living cells in their laboratories. After all, in cells all kinds of complex reactions are taking place simultaneously in a small area, in various compartments and incredibly efficiently. This is why chemists attempt to imitate the cell in various ways. In doing so, they also hope to learn more about the origin of life and the transition from chemistry to biology.

A research team led by Jan van Hest (Radboud University) and Sébastien Lecommandoux (University of Bordeaux) created their organelles by filling tiny spheres with chemicals and placing these inside a water droplet. They then cleverly covered the water droplet with a polymer layer – the cell wall. Using fluorescence, they were able to show that the planned cascade of reactions did in fact take place. This means that they are the first chemists to create a polymer cell with working organelles.

'Just like in the cells in our bodies, the chemicals are able to enter the cell plasma following the reaction in the organelles, to be processed elsewhere in the cell,' Ruud Peters, PhD candidate on the project, explains.

Search for the origin of life
Creating cell-like structures is currently very popular in the field of chemistry, with various methods being tried at the Institute for Molecules and Materials (IMM). Professor Wilhelm Huck, for example, is making cells from tiny droplets of solutions very similar to cytoplasm, and Van Hest’s group is building cells using polymers.

‘Competing groups are working closer to biology; making cells from fatty acids, for example. We would like to do the same in the future. Another step would be to make cells that produce their own energy supply. We are also working on ways of controlling the movement of chemicals within the cell, towards organelles. By simulating these things, we are able to better understand living cells. One day we will even be able to make something that looks very much like the real thing...’ GDeußing