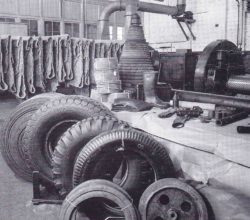 On 15.2.1936, IG Farben presented the first car tyre made from synthetic rubber (styrene butadiene rubber / SBR) to the public. In doing this, the company demonstrated in practice that natural rubber is not needed to produce car tyres. What was designed to be part of an emergency plan conceived by the Nazi regime in case there was a raw material embargo in wartime of the kind already experienced in Germany in the First World War came to be the international standard for car tyre production in the course of time.

Anyone who aims to be successful in a war needs to guarantee the supply of essential goods for the necessary period of time. Anyone who depends on third parties for the production of goods that are of relevance during a war will be easy prey if the enemy succeeds in restricting the supply of raw materials. Historians therefore consider the naval blockade by the allied forces to be the crucial turning point in the First World War, which led to the defeat of Germany. In order to make sure that nothing of this kind could happen a second time, the Nazis planned to make Germany independent of necessary raw material imports.

The objective was either to replace such important resources as cotton, oil / petrol and rubber by a different material or to produce, i.e. synthesise, them artificially in a laboratory. Commitment on the part of the German chemical industry was required, which joined forces to co-operate as the industrial syndicate IG Farben. Synthetic fibres were supposed to act as a substitute for cotton, while petrol was synthesised from coal and natural rubber was replaced by synthetically manufactured styrene butadiene rubber (SBR); the process for obtaining SBR was developed by Walter Bock and Eduard Tschunkur at the IG Farbenindustrie plant in Leverkusen in 1926, with a patent application being filed on 15. January 1927.

The German abbreviation for SBR (Buna) was taken from the initial letters of butadiene and sodium (“Natrium”), the components used in synthesis. Sodium acted as the catalyst for polymerisation of the butadiene in the presence of styrene. “Buna S” is a copolymer consisting of 70 per cent butadiene and 30 per cent styrene. IG Farbenindustrie, which was broken up after 1945 – partly because of its contribution to the preparations for the Second World War – obtained protection for the word mark “Buna” on 11. July 1929.