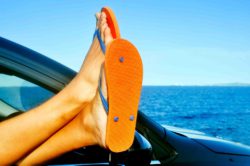 From the meteorological point of view, autumn started on 1. September 2016 and the calendar will be confirming this on 22. September. With current temperatures of about 30°C, one has the feeling, however, that summer and everything it involves is now coming back with a vengeance. Including fashion. Something that can be seen time and again at the moment: shorts, T-shirt, baseball cap on the head and flip flops on the feet. In this attire, quite a few people are going to the swimming pool or lake or wherever by car instead of bike – out of habit or because it is convenient or deliberately, because the AC promises to make it more pleasant. Fans of lightweight polymer shoes should, however, realise that this is anything but sensible. It seems that the opposite is the case – as if we had not always known this: anyone who accelerates, brakes or presses the clutch in flip flops is living dangerously – and is, in addition, endangering the lives of other people on the road. Scientists have proved this.

Scientists from Leuphana University in Lüneberg / Germany have investigated how dangerous it is to drive a car wearing flip flops. Professor Friedrich Müller and his team from LüneLab, the Leuphana Institute of Experimental Industrial Psychology, analysed 5,400 braking manoeuvres in a driving simulator.

Scientists from Leuphana University in Lüneberg / Germany have investigated how dangerous it is to drive a car wearing flip flops. Professor Friedrich Müller and his team from LüneLab, the Leuphana Institute of Experimental Industrial Psychology, analysed 5,400 braking manoeuvres in a driving simulator.

Among other things, the scientists studied the reactions of 34 people who wore sturdy, well-fitting shoes for half of the braking manoeuvres and flip flops for the other half. The readings taken included response times and the time needed to move the foot from the accelerator to the brake (implementation time) as well as the initial braking times, e.g. the time between when a traffic light changed or people walked onto the road and when the brake pedal had been activated completely.

The scientists came to a definite conclusion: in all conditions, the initial braking times are considerably longer with flip flops than with sturdy shoes. In braking situations that occur surprisingly – for example, when a child suddenly appears on the road on a skateboard – the braking distance increases: at a speed of 100 km/h by an average of about 2.5 metres.

Personal assessment of the drivers confirms the results of the investigation

Eighty per cent of the drivers report that they felt substantially less safe when driving in flip flops. This means that driving in unsuitable shoes requires the driver to pay much greater attention in general. Traffic psychologists therefore assume that braking times are lengthened additionally when drivers are distracted by complex traffic situations, by passengers or by something else. The scientists are planning to investigate such influences in a further study with a driving simulator that has been redesigned at LüneLab. GDeussing